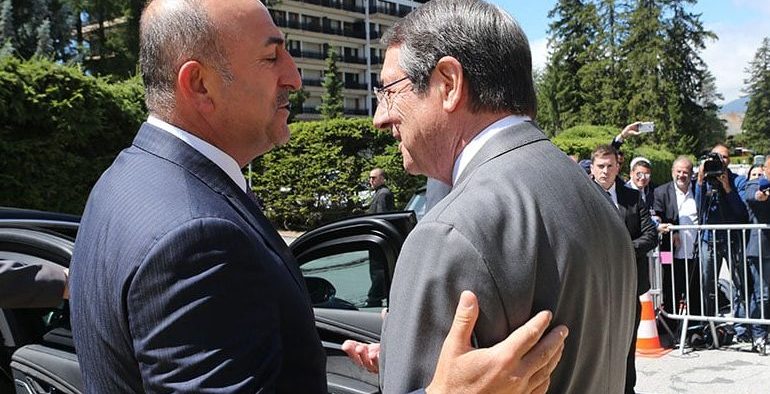 Turkey is open to all alternative types of solution concerning the settlement of the Cyprus problem but does not reject the federal solution, Turkish Foreign Minister, Mevlut Cavusoglu, has said.

In an interview with the daily Politis, published on Sunday, Cavusoglu said that the best way for both communities to feel safe was through confidence building measures (CBMs) and a lasting and just solution.

He also said that it must be understood that both sides must live peacefully side by side.

Turkey, he said, already contributes to alleviating the fears of the Greek Cypriots by supporting all convergences reached and all CBMs.

Cavusoglu added that Turkey does not reject the notion of a “loose federation”. He was referring to the proposal by President, Nicos Anastasiades, of a decentralised federation, to give a push to the talks out of the stalemate.

All attempts so far for a federal solution have failed, he said. Reiterating that Turkey does not rule out this type of solution, he said that all sides ought to look into other options.

He also said that the procedure will be under the umbrella of the UN.

As regards the issue of the closed off town of Varosha, Cavusoglu said that this should be part of the overall package of issues discussed between the two sides.

What would benefit both sides, he said, is an overall solution instead of working on separate issues and going step by step. In such a case, there may never be success or it might take even longer reaching a settlement solution, he said.

Cavusoglu also said that Turkey was the only one that had shown flexibility at the conference on Cyprus at the Swiss resort of Crans Montana as regards security and guarantees but that they had made clear from the beginning that the Greek Cypriot side’s position on zero troops and zero guarantees was a non-starter.

He added that the guarantors – Greece, Turkey and the UK – had brought to the table alternative proposals to support the procedure. Cavusoglu denied that Turkey had implied at the time that it was willing to waive its right to unilateral intervention.

On the possibility of Cyprus joining Nato in a bid to resolve the security aspect, Cavusoglu said that this could be done post-solution.

When there is a solution, he said, and a positive atmosphere, all these aspirations will be examined by other allies and by Turkey as a member of Nato.

But before discussing the issue of security, he said, it was important to discuss what type of solution is being negotiated, “a federation, confederation, two-states, or a fourth or fifth choice.”

First and foremost, he said, there must be an informal agreement on the framework of the talks and the terms of reference.

He added that Turkey does not reject or insist on any option and that, since there are alternatives, they should all be brought to the table. Turkey, he said, is open to ideas also coming from the island or the guarantors.

The Turkish foreign minister reiterated that there is no luxury for another failure and that all sides should reach an agreement without wasting any time.

He also stressed the importance of a lasting solution accepted by all.

As regards the disagreement of both sides as to the management of natural gas resources, Cavusoglu said there is no guarantee that the Greek Cypriot side would grant Turkish Cypriots their rights if there is no solution within the coming years.

He said he was not convinced by the commitment of the Greek Cypriot side that natural resources is a federal matter and that Turkish Cypriots would not lose their share of the profits.

The fact that the Greek Cypriot side refuses to discuss a solution on this matter presently, means that it does not mean what it says, he said.

Turkey, he said, is not against the exploratory drilling and management of natural gas, but against the unilateral actions of the Greek Cypriot side. That is why, he said, as the guarantor power, not only it reacts but is also taking action by starting its own drilling in the area.

If the Greek Cypriot side reaches an agreement with the Turkish Cypriots, he said, either through energy companies or the EU, then, Turkey will not have a problem with these actions.

At the moment, he said, Turkey does not see the rights of Turkish Cypriots being ensured.

If a settlement solution is imminent, he said, why this concern can’t be answered simply through the creation of a fund to ensure sharing of the proceeds.

He said that he has brought this up during meetings with Anastasiades but that the latter insists that it cannot be done at the moment. This means he will never do it, Cavusoglu said.

The fact that Anastasiades has said in the past that he would sell natural gas to Turkey when the time comes, Cavusoglu said, did not guarantee the rights of Turkish Cypriots.