Rojava and Turkey: A classic case in colonialism

Rojava and Turkey: A classic case in colonialism 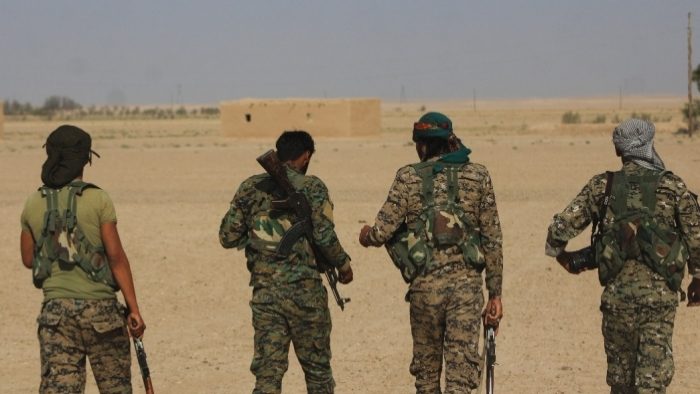 Kurdish-dominated areas of northern Syria are at the forefront of Ankara’s neo-Ottoman, imperialist designs for the Near East. To prevent another disastrous war in the region, the international community must support the Kurds’ right to self-defense and self-determination.

As the United States prepares to withdraw militarily from Syria, one of the biggest questions is that of the Kurdish presence in the north — known as Rojava. When the Syrian Civil War began, the Kurds focused on two main things.

First, they developed a system of autonomy — given their history of persecution under the Assad regime. Second, they turned their guns (with Western support) on ISIS and other Sunni jihadi groups. After aligning themselves with moderate Arabs in liberated regions, much of the territory held by jihadists has been clawed back and is under the rule of the Syrian Democratic Forces (SDF).

Yet the danger is not over. Without Western protection or a deal with the Assad regime and its supporters, the Kurds in Rojava are vulnerable to Turkey’s imperialist designs on the region. The ruling Justice & Development Party (AKP) and its president, Recep Tayyip Erdogan, seek to benefit economically, demographically, and militarily in Syria by colonizing Rojava under the guise of a “safe zone.”

We have already seen this approach in Afrin, where the Turkish regime has stolen and sold off countless olive products it passed off as its own. After the Obama Administration shamefully approved of Turkish anti-Kurd operations in northern Syria, Ankara took this as a green light to invade and occupy Afrin.

The Trump Administration proved unable or unwilling to adopt a more pro-Kurdish stance than the previous occupants of the White House. Its hasty Syrian withdrawal plan and trust in the Turkish regime to “protect Kurds” is either an embarrassing betrayal or an ignorant policy.

Humiliated by the Assad regime’s seemingly-assured victory over rebels that he supported, Erdogan seeks to make lemons out of lemonade in Rojava. In Afrin, Turkey has imitated Saddam Hussein. After ethnically cleansing Afrin of its indigenous people—with impunity—Turkey claimed to give the region “back to its rightful owners”—Arabs and Turkmen.

Now, under economic threat from a recession and US President Donald Trump, Turkey is seeking to create a “safe zone” in the very north of Syria. But the past threats by the AKP against the Syrian Kurds demonstrate that this is just lip service from Ankara intended to temporarily appease Western powers. Turkey’s warning to France to leave the area and stop protecting Kurdish fighters underscores the genocidal and colonial desires of the Ankara regime to dominate Rojava.

With the US out of Syria, it is unlikely that a miniscule European presence would pose much of a threat to its NATO partner’s plans, or stick around long at all. A subsequent French withdrawal could leave Turkey free to destroy the Kurdish presence in the north and take Rojava for itself.

Rather than seeking to accommodate the desires of its Russian and Iranian “peace partners,” Turkey will merely increase its troop presence in the country and allow its Islamist proxies to expand their presence. That will enable Ankara to fulfill its long-held goal—to eventually overthrow the Assad regime, thwart Iran’s regional aspirations, and become the new Muslim hegemon of the region, while retaining its NATO status.

Rojava will become not just a base for Turkey to crush Assad and his pro-Iran allies, but it could also provide an air base for Turkey to strike Kurdish militants across the border in Iraq. This will enable the return of ISIS, al-Qaeda, and other terrorist organizations that the current regime in Ankara has either enabled or assisted. It appears that this is a deliberate strategy of Erdogan.

A permanent and growing Sunni radical arc will bog down non-Sunni Iran and Israel — the other two non-Arab powers in the region—while eroding Arab countries from within (as has happened since the Arab Spring). Growing terror attacks by such groups would wear down Russian and Western forces committed to staying in the region, and ultimately extirpate them due to popular demand, economic decline, and war-weary politicians.

The sole benefactors would be Turkey and its ally, Qatar. While Rojava would, in such a case, be the bloody beginning of a vast regional war, it would certainly not be the end.

The international community must take strong action against Turkey and for the Kurds to stop this. Too often, especially in the Middle East, the Western World is reactive rather than preventive. The US and France should declare Rojava a no-fly zone and host a peace conference to negotiate some sort of joint protection & political mechanism for Kurds in Rojava & Iraqi Kurdistan. The US could provide THAAD, Arrow, and Patriot air defense systems to the PYD (Democratic Union Party) and KRG (Kurdistan Regional Government) when such a deal is reached. Israel, for its part, could base Iron Dome and David’s Sling missile defense systems alongside the American models.

This would serve not only to protect Kurds, but also Israel itself and its Arab partners, along with American military bases in the region that are threatened by Iran’s missile program. All of these would be solely defensive measures aimed at preventing a genocidal aerial onslaught by Ankara or Tehran against Kurdish forces, while delivering a serious negotiating chip to the Kurds of Syria if they ever did have to seek a deal with Assad.

Moreover, the international community must warn Turkey that it would be against its economic interests to pursue a war against the Kurds or others. As it is, Turkey is in a dire economic state. If Ankara ignored the West’s concerns over an attack on Kurdish regions, Paris, Washington, and other Western capitals should use sanctions for its long record of human rights abuses, war crimes, and support for terrorism.

Hopefully these warnings would prevent Turkey from launching a foolish and unnecessary war and pursuing an imperialist policy to the detriment of the region’s inhabitants.

Dmitri Shufutinsky is a recent graduate of Arcadia University’s master’s program in International Peace and Conflict Resolution. He specializes in indigenous and racial politics in the Levant, as well as Near Eastern affairs more generally.

The views expressed in this article are those of the author and do not necessarily reflect the position of Rudaw.

Previous Article
‘What happened to Turkey is coming towards you. This political insanity is global’
Next Article
Turkey’s construction industry struggles on