How a school visit added to Turkey-US tensions

How a school visit added to Turkey-US tensions 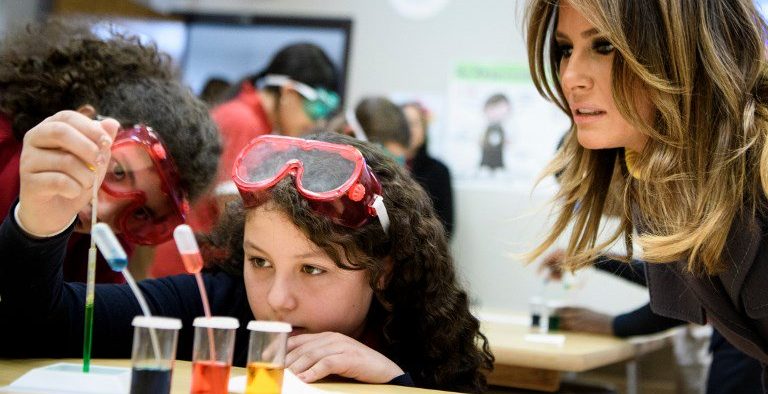 US First Lady Melania Trump last week paid a visit to a charter school — the Dove School of Discovery, located in Tulsa, Oklahoma. This was part of her multi-state trip to promote her “Be Best” initiative. There is nothing unusual about a first lady visiting a school in her country, but there is a flip side to the coin: The school is affiliated with the Gulenist movement, led by Turkish cleric Fethullah Gulen, who lives in self-imposed exile in Pennsylvania. Gulen is accused by Turkey of being the man behind the failed military coup staged on July 15, 2016, and the Turkish government has been lobbying for years to close down the schools he runs.

Turkey has insistently asked the US to extradite Gulen and has sent 84 packages of documents to justify the extradition. The US authorities still maintain that they are examining whether the evidence contained in these packages is acceptable under US laws.

There is an investigation under way in the US that was initiated in March 2017 by the revelation of former CIA Director James Woolsey, who claimed that Trump’s ex-National Security Adviser Michael Flynn negotiated with Ankara to kidnap Gulen and deliver him to the Turkish authorities in exchange for $15 million dollars.

In another investigation, Oklahoma’s State Auditor reported in 2016 that the Gulen foundation operating the Tulsa school had charged US taxpayers $1.2 million in excess rent between 2012 and 2014. Oklahoma’s former attorney general Drew Edmondson commented that there was nothing illegal in leasing the school at one rate and then charging the public more for its use. The audit also showed that the foundation had used $175,000 of public funds to sponsor an out-of-state science competition held by Gulenist charter schools in Texas, and that none of the Tulsa school’s students attended.

These are the reasons why the first lady’s visit attracted attention. It is unclear whether a Gulenist school was chosen on purpose or it was a coincidence. The visit was announced only after it was over. The US authorities may have thought that, if the visit were to be announced in advance, the Turkish authorities would have insisted she cancel it. After the visit, Trump wrote on her private Twitter account: “Thank you to the teachers, leadership and students of Dove School of Discovery in Tulsa for welcoming me today. There is great work being done. It is so important that education includes not only academics, but the importance of a strong sense of character and values.”

The first lady’s spokesperson, Stephanie Grisham, wrote in an email that the school “was recognized with the 2018 National School of Character award and was chosen because of its excellent academics and commitment to character education. The school was recommended and vetted before the visit.” In fact, the school was described in a White House statement of Feb. 28 as “an award-winning elementary school that focuses on incorporating character education throughout its curriculum.”

Despite the credentials of the school, one may still assume that a school run by the Gulenist movement was chosen on purpose to send a message to Turkey. The US is trying to corner Turkey because of several divergences between the policies of these two NATO allies. One such disagreement surrounds Turkey’s purchase of the S-400 air defense system from Russia. The US opposition to this move has been voiced at every level. Pentagon spokesman Charles Summers said on Friday that Turkey would not receive any F-35 fighter aircraft or Patriot missiles if it deploys the S-400 system. Lockheed Martin, the main company involved in the construction of the F-35, has reportedly started to look for alternative manufacturers for the components that were being produced by Turkish companies.

The US authorities have warned that other sanctions may also follow. NATO Secretary General Jens Stoltenberg played a part in adding to the pressure on Turkey by pointing out that, while every sovereign country has the right to purchase any weapons or defense system, the Russian air defense system is incompatible with the NATO defense environment.

Turkey and Russia are engaged in mutually advantageous cooperation in Syria and in their bilateral economic relations. Ankara’s stepping back from the purchase of the Russian air defense system would seriously damage its credibility and damage its relations with Moscow.

Such pressure on Turkey will be perceived by President Recep Tayyip Erdogan as an effort to discredit his party ahead of the local elections to be held on March 31. He may use this opportunity to blame the US’ attitude more strongly and increase the support for his party, but a permanently increasing tone of mutual blame will further damage Turkey’s position within the Atlantic community — and this is exactly what Moscow would like to achieve.

• Yasar Yakis is a former foreign minister of Turkey and founding member of the ruling AK Party. Twitter: @yakis_yasar

US journalist branded as terrorist by pro-government Turkish daily