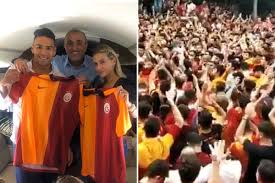 The 33-year-old is set to pen a three-year deal with the Super Lig side who are well known for boasting one of football’s most passionate fanbases.

Scenes outside the Atatürk airport

And this was with an hour to go

@falcao are you ready? 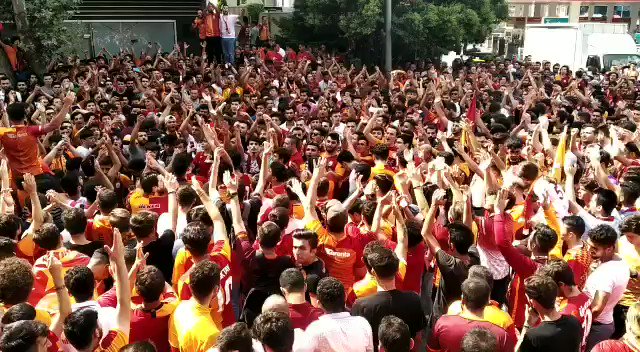 48 people are talking about this

Supporters, who threw missiles onto the pitch when Galatasaray won the title in May, were this time armed to the teeth with flags and scarves to celebrate Falcao’s arrival.

The Colombian established himself as one of the world’s best strikers at Atletico Madrid between 2011 and 2013, winning the Copa del Rey, Europa League and Super Cup in the process.

Before that, he had scored a staggering 72 goals in 87 matches during two years at Porto to win the Primeira Liga, the Portuguese Cup, the Portuguese Super Cup and Europa League.

His magnificent form soon secured a £50million move to Monaco, where he lifted the Ligue 1 title after loan spells with Manchester United and Chelsea.

Falcao still has one year left on his contract with the French club, but is yet to feature for Leonardo Jardim’s side this season because of an ankle injury.

The Colombian international hinted that he was keen to move on earlier this summer, and was linked with a switch to David Beckham’s Inter Miami outfit.

“The truth is that I still have a year of contract and the club did not offer me an extension,” Falcao revealed following a friendly victory over Sampdoria last month.

Tags:
Previous Article
Kurds Falling Prey to Turkey Expansionist Policy
Next Article
Syria safe zones: what is driving the unexpected rapprochement between the US and Turkey?

Syria safe zones: what is driving the unexpected rapprochement between the US and Turkey?
NAT 1st September 2019
Submit an Op-Ed
Tweets by NewsAboutTurke1