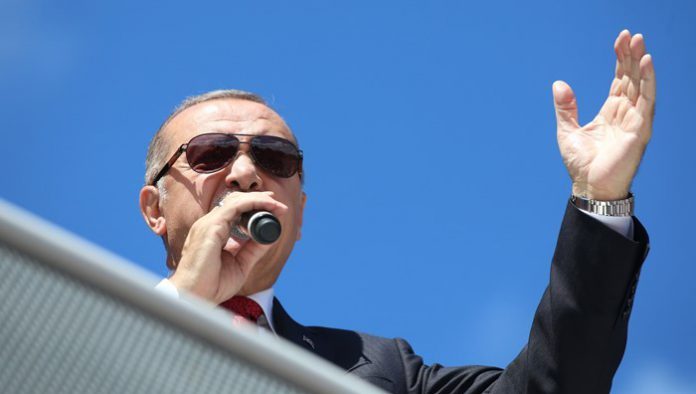 Last week, Turkey’s firebrand president, Recep Tayyip Erdogan, announced plans to send troops to Libya and the government is now fast-tracking a bill in parliament to approve the deployment.

The looming Turkish intervention in the Libyan civil war is but the latest example of Turkey flexing its muscles in its surrounding region. Since 2016, Turkey opened military bases in Qatar and Somalia, intervened three times in neighboring Syria against the Kurdish forces of the People’s Protection Units (YPG) and sent naval vessels to disrupt Cypriot drilling for gas in the Eastern Mediterranean. Several weeks ago, Turkish naval forces even chased away an Israeli vessel from Cypriot waters.

In November, Turkey and Libya signed an agreement that recognized their respective maritime boundaries, which extended into the exclusive economic zones of Greece. This was nothing short of an assertion of Turkish interests in the Eastern Mediterranean. The agreement also served as a message to Egypt, Israel, Cyprus and Athens that Turkish interests cannot be overlooked when considering the future of Mediterranean gas.

However, such moves also highlight Ankara’s delusions of grandeur in its quest to become a regional and global power. Back in 2010, then U.S. Ambassador to Ankara James Jeffrey stated that Turkey has “Rolls Royce ambitions” with meagre “Rover resources.” Indeed, Turkey’s pursuit of international status is hampered by the fact that the country is no more than a medium-sized power with limited means at its disposal.

Turkish leaders genuinely believe that Turkey is a significant international power. Erdogan often repeats the phrase that the “world is bigger than five,” referring to the five permanent members of the U.N. Security Council – the United States, Britain, France, Russia and China – insinuating that Turkey should also be considered an equally important international actor. Erdogan has suggested that the United Nations open headquarters in Istanbul; that Turkey should be part of the BRICS organization  comprising of the emerging powers of Brazil, Russia, India, China and South Africa; and after winning elections in 2018, he has stated that he would now focus on making Turkey an international superpower.

Global powers have independent foreign policies and seek influence over their neighboring countries and regions. In the case of Libya, Ankara wants to have a say on the future of the country, especially as it offers Turkey leverage in the Mediterranean. Ankara is also hoping that if the Tripoli government eventually wins the country’s drawn out civil war, Turkish firms would continue to be rewarded with lucrative contracts in the construction and service sectors.

However, Turkey’s involvement in Libya may prove to be a colossal failure. Ankara is backing the underdog in the Libyan conflict. Although the Tripoli government is internationally recognized, the forces of the opposing General Khalifa Haftar dominate much of the country. Haftar is backed by Russia, Egypt, Sudan, Jordan, France, and the United Arab Emirates who are providing sophisticated weaponry, tanks, cash, heavy arms and equipment. Hundreds of Russian mercenaries have been sent to fight alongside his forces. Ankara doesn’t have the means or the capability to counter such overwhelming support for Haftar’s troops and their looming attack on Tripoli.

To make matters worse, by supporting the Tripoli government, Turkey risks isolating itself from its new pal Russia. Following the purchase of Russian S400s, a missile defense system incompatible with NATO hardware, ties between Ankara and Moscow have blossomed to the chagrin of Turkey’s traditional allies in the West.

However, supporting the Tripoli government pits Ankara against Moscow at a time when Turkey has few alternative allies. Turkey is facing the prospect of U.S. congressional sanctions for its purchase of Russian weaponry and its recent intervention in Syria against Kurdish forces who were on the forefront in the war against the Islamic State. Ankara also faces European sanctions for drilling around the territorial waters of EU-member state Cyprus. Indeed, Turkey’s international isolation is becoming entrenched and the country is virtually friendless in Europe and the Middle East, perhaps with the exception of Qatar and the warm relations between Erdogan and Hungary’s Viktor Orban.

Meanwhile, domestically, Turkey struggles to deal with an ongoing economic crisis which has seen the Lira plummet against major currencies and inflation rise. Turkey also shoulders the burden of hosting almost 4 million Syrian refugees. This in itself is a stark reminder to Turks of the consequences of its government’s disastrous policies towards Syria during the country’s eight-year civil-war.

Instead of gaining influence, Turkey is risking further international isolation by involving itself in the Libyan civil war. Sending troops to Libya is a foreign policy disaster waiting to happen, a direct result of Ankara’s unquenchable desire to be a leading international power.

BY: Dr. Simon A. Waldman is an associate fellow at the Henry Jackson Society and a visiting research fellow at King’s College London. Twitter: @simonwaldman1