A deadly earthquake in eastern Turkey has rekindled questions about how the government spends billions of liras in “quake taxes” in a country crisscrossed by fault lines and whose biggest city, Istanbul, is said to be at risk for a major tremor.

The 6.8 magnitude Jan. 24 quake, centered on the town of Sivrice in Elazig province, claimed more than 40 lives in the region. Since then, other tremors have jolted western Turkey, fanning misgivings on how much headway the country has made in quake precautions since 1999, when two massive tremors hit the industrialized northwest three months apart, killing some 20,000 people in several provinces, including Istanbul.

Despite a history of devastating quakes, Turkey has been notorious for shoddy construction and little preparedness for seismic and other natural disasters. Turkey ranks third in the world in terms of quake-related casualties and eighth in terms of the total number of people affected, according to the country’s disaster and emergency management agency AFAD. About 70% of Turkey’s territory is in earthquake belts, marked by three major fault lines, known as the North, East and West Anatolian faults. Some 14,000 earthquakes, measuring from 4.0 to 7.9 magnitude, have hit the country since the beginning of the 20th century, claiming about 87,000 lives and destroying more than 600,000 buildings, AFAD data show. This means an average of two tremors with deadly casualties or material damage per year.

Such a high risk requires utmost preparedness, especially in terms of quake-proofing homes, infrastructure and the entire building stock. Japan is known as a prime example in this respect. Turkey, for its part, has a long way to go, despite the disasters it has experienced over the years. The housing stock of low- and middle-income groups in particular is known to be at serious risk. Fears are rife that Istanbul, a sprawling city of more than 15 million, could face colossal damage when “the big one” strikes. Interior Minister Suleyman Soylu said last week that authorities were preparing for a scenario of a 7.5 magnitude quake hitting the city, which is Turkey’s industrial and financial hub. Experts say Istanbul could be due for a major quake — its last major one was in 1894.

After the 1999 disaster, temporary new taxes were introduced to back relief and reconstruction efforts, which came to be known as “quake taxes.” By 2003, those tax revenues amounted to 7.3 billion Turkish liras ($1.2 billion at the current exchange rate). Yet the money was not collected in a special fund, but went to the government budget, along with regular tax revenues. The most prominent of those taxes — the special communication tax levied on mobile telephone bills — was made permanent in 2003, the first full year in power of the ruling Justice and Development Party. By 2020, revenues from the special communication tax totaled 68 billion liras (some $11.5 billion). Revenues from the “quake taxes” introduced after the 1999 disaster have totaled nearly 73 billion liras ($12.3 billion) over two decades.

How those revenues are being spent is a debate that simmers after each powerful earthquake. Various explanations have been offered over the years. In 2011, for instance, then Finance Minister Mehmet Simsek said the money was being spent like any other tax revenue to fund public services such as health care and infrastructure projects. “The logic of tax collection for a particular spending is not favored in international taxing practices, either,” he argued.

And what has the government done to enhance the country’s preparedness against earthquakes? How much has been spent?

Some of the spending is directed at post-quake relief, while some is related to quake resilience. In the first category, AFAD has set up logistic centers in 25 of the country’s 81 provinces to meet urgent needs in the wake of disasters. Additionally, logistic support depots have been set up in 60 provinces to store supplies that would be urgently needed after disasters.

When it comes to quake resilience, the government has launched a so-called “urban transformation” program under a 2012 law aimed at enforcing quake-proof construction. As of 2019, 616,270 independent units were listed as risky structures by licensed controllers authorized to establish the soundness of buildings under the law. Also, 240 locations in 53 provinces have been declared “risky areas,” in addition to 152 “urban transformation and improvement project areas” in 30 provinces and 10 “renewal areas” in seven provinces. The authorities have designated also “reserve building areas” of up to 46,000 hectares to use as land for new settlements. Since 2012, the Environment and Urban Affairs Ministry has spent about 13 billion liras ($2.2 billion) as part of urban transformation projects, mainly in the form of rent assistance to institutions and individuals, loan support, expropriation payments and renewal work. The sum is equivalent to about 18% of the revenues from the “quake taxes.”

The presidency’s 2020 program points clearly at financial, administrative and technical challenges in the face of the growing number and size of areas requiring urban renewal. Nongovernmental experts, however, say the problem is not only quantitative, but extends to how the renewal work is being conducted. According to Nusret Suna, the head of the Istanbul branch of the Construction Engineers Chamber, “Real urban transformation is supposed to be neighborhood-based, large-scale, resident-focused, environment-friendly and with social reinforcements. What has been done so far, however, is utterly individual or profit-oriented transformation.”

The housing quality in the country remains a source of concern. A 2018 survey on income and living conditions by the Turkish Statistical Institute found that 36% of homes had leaking roofs, damp walls and rotten windows. In the category of impoverished families and their 17 million members — 21% of the country’s population — the rate of such substandard homes reaches 60%, indicating that the poor are more vulnerable to the deadly risks of earthquakes. Clearly, Turkey needs to allocate more of its tax revenues to reinforcing buildings and show more respect to its citizens’ right to life.

BY: Mustafa Sonmez is a Turkish economist and writer. He has worked as an economic commentator and editor for more than 30 years and authored some 30 books on the Turkish economy, media and the Kurdish question.

Previous Article
Alarm as Turkey’s ruling party moves to empower night watchmen
Next Article
How Far Can Turkey Challenge NATO and the EU in 2020? 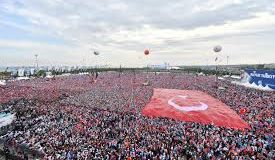 How Far Can Turkey Challenge NATO and the EU in 2020?
NAT 1st February 2020
Submit an Op-Ed
Tweets by NewsAboutTurke1