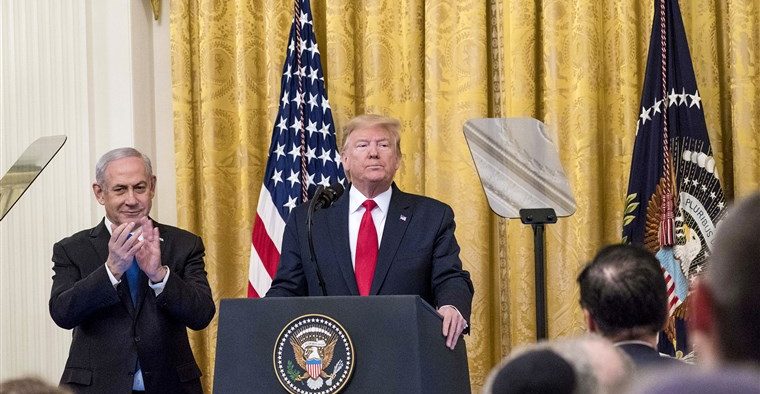 A Middle East that has been the political and military hotbed of world superpowers for hundreds of years, this time in a new world and with the new policy will be influenced by the seemingly peaceful policy of the West. Due to the unveiling of the Century Deal plan that included only the Israeli side and no Palestinian representatives, Trump`s government tries to offer a win-win opportunity for both sides, a realistic two-state solution that removes the Palestinian government’s risk to Israeli security.
The deal of the century by the Trump administration has literally reversed the Oslo process. Contrary to the Oslo process, which had been conditioned upon its occupation of the land and the establishment of an independent Palestinian state on the borders of 1967 year, the Arab states now forced to establish normal relations with Israel not only without having any land but also any authority and existence of a Palestinian state. According to this seemingly peaceful thought (The Middle East Peace plan), without formal recognition of the borders related to 1967 (Green Line) Arab States are now supposed to establish a formal diplomatic relations with Israel in a way that Perhaps the Palestinian issue may be resolved. It seems that the Palestine issue will not be resolved by reversing the Oslo process, but rather there will not exist any Palestine that cause to conflict the countries of the region with Israel.
In fact, the deal of the century is a complete humiliation for the Palestinian side. Although this agreement is about the formation of a serious Palestinian state, in practice no guarantee to Palestinian side is given. Furthermore, it has only been asked to accept the conditions assigned to it and to assume that all their affairs will now be managed by Israel.

In fact, this shameful Transaction Plan, in which no provision was made to guarantee Palestinian relations with neighboring countries other than Israel, included the complete annexation of Quds and its isolation. More than this it is the complete destruction of the right of return of Palestinian refugees.
Meanwhile, Moscow, which has consistently benefited from all the events in the Middle East, is waiting to see the benefits of such an agreement, not because it promotes peace in the Middle East, but because it allows the strong side of the deal to benefit the existing conditions. Looking back on the history of the Palestinian-Israeli conflict, we will be fully aware of Russia’s role in Jerusalem’s decisions. For example,during the Soviet era, Soviet involvement in relations between Israel and the Arabs has always been bright. Now, after many years, citing Russia’s political behavior in the region, it would be clear that Putin’s regional and pro-Russian policies would favor global partnership. Accordingly not only is Russia not on the side of the right, but it is systematically and profoundly seeking to establish an identity of Palestine and Israel that does not undermine its regional interests. If, to date, it has not explicitly stated its opposition to the plan, it is not a reason for its non-interference in the region’s issues, but rather a deterrent to Moscow’s regional interests.
Will this plan benefit both parties?
As it has been the case, the international community has always been in favor of a two-state solution, which means the establishement of Palestinian and Israel close to each other. But Trump`s new peace plan for the Middle East does not accord with this claim completely. The plan in which The Palestinians have less land share than in the past. Israel, meanwhile, will give up land that holds Arab citizens in exchange for the land it owns. This has long been a desire of Israelis as a way of reducing the number of Israeli Arab citizens.In addition, the city of Quds is given to Israel while the Palestinians have the right to establish a capital in the suburbs. The plan implies that there will be no Palestine as an independent country and this “state” will be under Israeli control, and its formation will only be possible after the end of a four-year period in which the Palestinians will have been operating under a set of strict conditions. In general, it can be said that despite the international community’s acceptance of any settlement with the Palestinian-Israeli conflict, Trump’s Middle East peace plan does not share the positions and the interests of the parties alike and it is in favor of the interests of the Jewish side.
In conclusion, Trump`s “deal of the century “seems to be less peaceful and in fact, it tries to increase the power of Israel. Aside from this, Washington’s proposal will not only calm Jerusalem, but may even aggravate tensions between the Palestinian and Israeli states because of its unilateralism.

Written exclusively for News About Turkey (NAT) by Aming Bagheri

Amin Bagheri is a member of the Iranian International Studies Association. His research focuses on the Middle East.

Who is supplying Russia with drones?
NAT 9th October 2022

Who is supplying Russia with drones?

Invitation: Are you interested in understanding and exploring the reality of Catalonia (Catalonia OpenDoors) ?
NAT 19th February 2020
Submit an Op-Ed
Tweets by NewsAboutTurke1