Why Doğu Perinçek is now Turkey’s logical successor to Erdoğan

Why Doğu Perinçek is now Turkey’s logical successor to Erdoğan 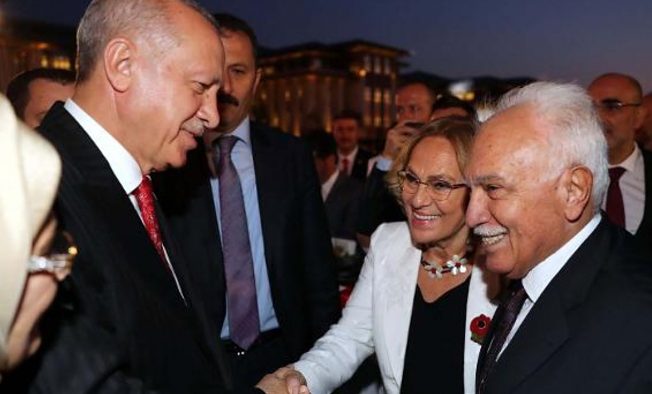 Many in Turkey have started to think about a question that they never speak out loud: Who would succeed President Recep Tayyip Erdoğan? Or rather, who would succeed him if he passes away before he loses an election.

Under normal circumstances in a democracy this would not be a burning question; the gears of the system would turn and produce a successor who could try radical policies, but would not actually be able to change much in terms of fundamental issues.

But in Turkey, with all the amendments to the constitution, the presidential seat is now where executive and legislative powers – as well as judicial control to a large extent – converge. The laws Erdoğan wants to pass now simply go through parliament before anyone even has the chance to say “Hey, we do not have much power left at this point, do we?”

The latest example of that has been the multiple bar associations act, clearly aimed at weakening the power of lawyers to criticise human rights violations and erosion of the rule of law. Criticise Erdoğan’s Religious Affairs Directorate (Diyanet) in April, have your entire system upended by July.

The Turkish presidency is now involved with every aspect of daily life, with every appointment waiting for its approval. As such, if – God forbid – Erdoğan were to pass away before Turkey holds elections or returns to its former parliamentary system, the country would certainly fall into crisis.

So, the question remains: Who should succeed him in such a situation?

My candidate is, of course, Doğu Perinçek: Turkey’s favourite China-and-Russia-loving nationalist brand of communist revolutionary who also loves to offer his support to the decidedly un-communist Erdoğan.

Yes, it is true that Perinçek’s Fatherland Party (VP) has never garnered enough votes to win seats in parliament. But who has? Not the Worker’s Party (İP) – VP’s former incarnation.

There is a commonly-held belief that VP cadres are strong among Turkey’s bureaucracy. That may be true, but what’s actually important is that Perinçek is the father of internet memes in Turkey, with such classics as flying off the handle at the mention of Ottoman Sultan Abdulhamid, and innocently receiving flowers from the notorious leader of an armed Kurdish movement of four decades, Abdullah Öcalan.

We may never know who defended Abdulhamid, but we know that Perinçek can defend Erdoğan’s musings that ‘wouldn’t a social media ban be nice’, because he did just that last week when he said a “national state” has to enact a dictatorship, because the communist leader stands against “the freedom to be a pawn to the United States”. He can also maintain Turkey’s relationship with Russian trolls and root for a China-style intranet.

You see, Perinçek is one of the very few people who could carry on Erdoğan-style politics. A mere two years before doing just that, Erdoğan himself was scolding people who demanded Hagia Sophia’s conversion into a mosque, drawing an equivalency between the former Orthodox cathedral and the mosques scattered throughout the Balkans that have either been torn down deliberately or left to rot.

Perinçek the communist is also one of the very few who could sustain a similar alliance with the far-right Nationalist Movement Party (MHP) like Erdoğan can. He does agree on an awful lot with the very movement that started as an anti-communist student movement.

One issue I personally can think of could be that the ruling Justice and Development Party (AKP) base is not entirely receptive to Perinçek. But in such a scenario, Perinçek could just play the Süleyman Soylu card.

A former critic of the president, Soylu is now Interior Minister and is highly popular within the AKP. It would cause an initial surprise, but the masses will be quick to get used to a Soylu-Perinçek partnership.

What about Erdoğan’s son-in-law, Finance Minister Berat Albayrak? Well, he appears to be the natural heir, but only a fraction within the AKP actually support him. He’s not somebody who could receive support from certain, darker sections of Turkey’s behind-the-scenes forces like some people.

But, back to Perinçek! He can say the exact opposite of whatever he believed a minute ago, and remain somewhat consistent – nothing short of a super power, in my humble opinion. Soylu does not have this going for him, that is for sure.

Discussing this matter brings to mind a 2017 Turkish short film “The Last Schnitzel” which depicts the adventures of an unfortunate presidential aide who is tasked with frying up a chicken schnitzel for the president, 200 years after the last chicken has died and just before the Earth gets destroyed in an apocalyptic scenario.

I do not want to spoil the film. Watch it, it is available on several streaming platforms. It was not, however, available in Istanbul film festival, perhaps because it did not have the necessary permits like the authorities said at the time, or because it reminded viewers of a certain somebody.

In any case…The aide finds a creative solution in the end, appeasing the president and saving the nation in the nick of time, after everybody else has left the dying planet.

And I’m left thinking, if Turkey’s next president does not return to a parliamentary system, we may find ourselves in a very similar situation with discussions that have no end, lagging behind the rest of the world.