Turkey in Battle to Defend Lira Despite Dollar Weakness

Turkey in Battle to Defend Lira Despite Dollar Weakness 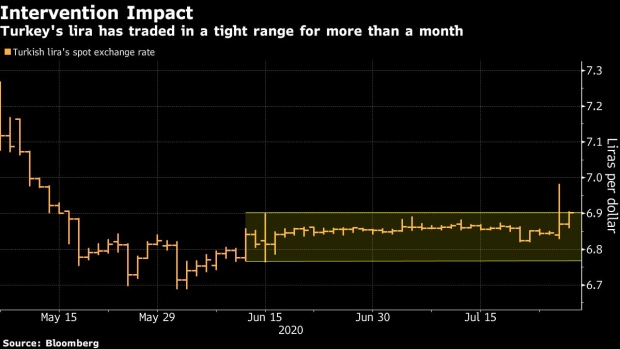 (Bloomberg) — Not even the dollar’s swoon is helping the Turkish lira, which is being weighed down by a widening current-account deficit and an outflow of foreign capital.

The currency fell as much as 1.4% against the dollar Tuesday, its third successive decline, defying attempts by state-run lenders to stem the selloff. On Monday, it tumbled the most since April in intraday trading, hovering close to the psychological 7-per-dollar mark.

Turkish state-run banks have sold about $2 billion to support the lira this week, according to three people with knowledge of the matter. While the lenders don’t comment on their activities in the foreign-exchange market, traders say such interventions have kept the currency in a tight range for more than a month.

“Seems like a big battle is under way this morning again around the lira, with state banks very active in its defense,” said Timothy Ash, a strategist at BlueBay Asset Management in London. “The lira is now a heavily managed exchange rate.”

The lira’s weakness looks starker when set against the deepening losses in the dollar, analysts said. The U.S. currency as measured by the Bloomberg Dollar Index has retreated to a two-year low and is heading for a fourth monthly decline.

It also lays bare the cost of economic policy in Turkey this year. While a front-loaded easing cycle and state-sponsored credit binge have softened the blow from the coronavirus pandemic, they have exacerbated the economy’s vulnerabilities and left the currency exposed.

Meanwhile, an attempt to contain volatility in the lira by restricting foreign investors’ ability to trade the currency has compounded a flight from Turkish assets. Foreigners have pulled more than $12 billion out of the local-currency bond and equity markets in the past 12 months.

The current-account balance swung back to a deficit in December and analysts in a Bloomberg survey project it will widen to 2% of gross domestic product for 2020. The fiscal shortfall may more than double in the year to 6.5% of output.

Apart from the Argentinian peso, the Turkish lira is the only major emerging-market currency to have fallen since the dollar peaked on March 23, unable to catch a break from the prospect of looser financial conditions that a weaker U.S. currency affords their economies.

The underperformance is telling given how much money authorities have spent on currency interventions. Turkey’s gross currency reserves have dropped almost 40% since the beginning of the year to $49.2 billion. Reserves including gold stand at $89.4 billion. As of the end of June, $54.4 billion of that was money borrowed through short-term swaps, central bank data showed