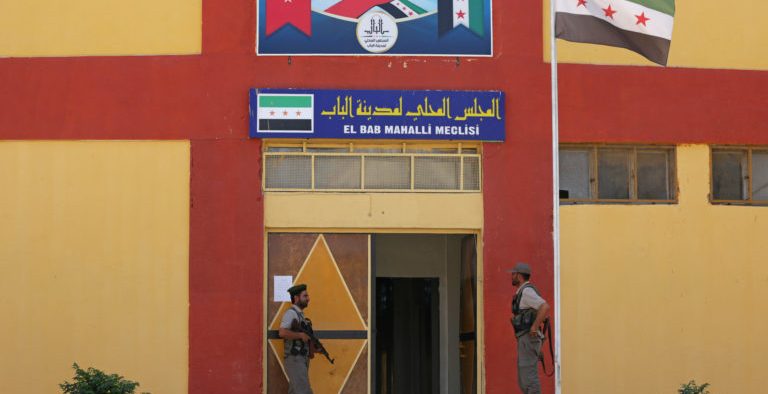 Turkish and Syrian opposition flags at the al-Bab city council building, in the northeast part of the Aleppo Governorate under Turkish-SNA control, July 2018. Khalil Ashawi/Reuters

Nine years after its eruption, the Syrian war has left behind a fragmented country. Turkey, Russia and the United States all have a military presence on the ground. Outside the areas controlled by the Syrian regime, foreign actors have carved out spheres of influence via coordination and cooperation with non-state actors. Turkey, for instance, has backed Hayat Tahrir al-Sham (HTS)—an al-Qaeda affiliate formerly known as Jabhat al-Nusra—in Idlib and the Syrian National Army (SNA) in the northwest and between Tal Abyad and Ras al-Ain in the northeast. These pockets of foreign-local alliances—and the accompanying governance structures they are establishing—underscore the formation of disconnected zones of control outside Syrian government control, and Turkey’s widening influence in particular.

Analysts have highlighted the tactical gains and strategic failures of Turkish foreign policy in Syria under the leadership of President Recep Tayyip Erdoğan. Notably, Ankara failed to realize its primary aim of toppling Syrian President Bashar al-Asad and remains far from achieving its goal of establishing a so-called safe zone along the Syrian border. But focusing on these failures obscures how Turkish military incursions are shaping political and power configurations not only in Syria but also in Turkey.

Turkey’s demographic, administrative and military practices in areas that fell under Turkish-SNA control during the Turkish military incursions in 2016, 2018 and 2019 resemble early phases of state formation. These areas are the northern Aleppo Governorate, the district of Afrin and the area east of the Euphrates River between Tal Abyad and Ras al-Ain. Surprisingly, often overlooked in the discussion on the Turkish presence in northern Syria is that Ankara’s administrative and military practices in Syria are creating political and economic beneficiaries in Turkey, as well as enabling the ruling Justice and Development Party (AKP) to suppress Kurdish political representation and curtail civil and political rights domestically.

A proper analysis of Ankara’s increasingly deep engagement thus requires an account of who benefits and who loses in Turkey from the Turkish presence in northern Syria. Among the beneficiaries are the Turkish military-industrial complex and the construction sector, as well as various political and security factions within the Turkish state that share a strong commitment to the nation’s sovereignty and territorial integrity, despite their partisan and ideological differences. The losers, on the other hand, are the Kurdish movement and anti-war activists, whose civil and political rights are systematically violated. Turkish war-making efforts in northern Syria are catalysts of rising authoritarianism in Turkey and of Syria’s potential future balkanization.

Turkey and the SNA Collaborate to Create a Sunni Arab Corridor

Turkey, after abandoning its initial objective of toppling Asad in favor of a Muslim Brotherhood-led government, currently has three goals with regards to Syria. First and foremost, Ankara is determined to halt Kurdish autonomy east of the Euphrates River. Secondly, it seeks to establish a predominantly Sunni Arab corridor in the Turkey-SNA controlled areas, similar to Hafiz al-Asad’s policies in the 1970s that attempted to create an “Arab belt” as a buffer separating Kurds in southern Turkey from northern Syria’s Kurdish population. Last but not least, Turkey aims both to repatriate refugees who currently live in Turkey as well as hinder new refugee flows.

Although Turkey’s goal of repatriating refugees currently seems unlikely, it is making progress in increasing the Sunni Arab presence in predominantly Kurdish areas such as Afrin through resettlement, manipulation of demographic data and intimidation. Ankara’s concurrent extension of its infrastructural capacity to the areas under its control together with its efforts to maintain a monopoly over violence also resembles the early stages of state formation. For example, Ankara’s October 2019 incursion into the area between Tal Abyad and Ras al-Ain caused alarm among analysts about possible demographic engineering attempts to replace the Kurdish population. Erdoğan’s remarks in the preceding months about Turkey’s determination to repatriate Syrian refugees to a Turkey-controlled “safe-zone” in northern Syria only heightened these worries. While mass-scale repatriation is unlikely any time soon, recent reports nevertheless point to ongoing small-scale resettlement of the SNA fighters’ families from Turkey-controlled areas in the northwest to Tal Abyad in the northeast.

Ankara also manipulates data for the purpose of demographic engineering. Turkey provides the technological infrastructure for civil registry records in SNA-held areas, which means that the Turkish Ministry of Interior Affairs has administrative control over the database. According to a report published in October 2019 by Syrians for Truth and Justice, the birthplaces listed on some identification cards of internally displaced persons were misrepresented and even forged.[1]

In addition to resettlement and the manipulation of the civil registry records, displacement of the Kurdish population also contributes to increasing the Sunni Arab presence in areas controlled by Turkey. In Afrin, for instance, Turkey’s proxy fighters have been accused of imprisoning individuals who were suspected to be affiliated with the Kurdish Democratic Union Party (PYD) and its military wing—the People’s Protection Units (YPG)—which Turkey considers an offshoot of the Kurdistan Workers’ Party (PKK).[2] There have also been reports of kidnappings and confiscation of property. Most of the Kurdish population in the town of Shaykh al-Hadid, for example, left after Turkey’s occupation of Afrin. Hundreds of families whose sons fought alongside Turkey and who were displaced from the Damascus countryside—including from Homs, Hama and Idlib—then settled in Shaykh al-Hadid instead.[3]

Alongside service provision, Turkey is also attempting to establish a monopoly over violence in the areas that it controls. Key to these efforts has been Ankara’s determination to unite local rebel groups. Around 30 groups affiliated with the Free Syrian Army came together at the end of 2017 and merged in October 2018 with the National Front for Liberation, which consisted of 11 groups with origins in Idlib. All these groups, once unified, were renamed the Syrian National Army (SNA). Turkey also formed and trained a police force to complement the work of the SNA.

Domestic Catalysts for a Turkish Presence in Syria

The Turkish construction sector also benefits from Turkey’s presence in northern Syria. Turkish companies have been employed in the construction of a series of highways, especially in the Operation Euphrates Shield area.[6] Turkey’s Muslim Businessmen’s Association (MÜSIAD) and Syrian businessmen are also reportedly cooperating on reconstruction projects in the Aleppo countryside.[7] The Turkish Cooperation and Coordination Agency (TİKA), which is a key government agency in government-led real estate investments in Turkey, also invests in Syria’s reconstruction.[8] Last but not least, Ankara’s so-far-unrealized plan to build cities and towns in northern Syria with infrastructure including hospitals, schools, mosques, homes and other facilities further points to the close connection between Syria’s war economy and the construction sector. The initial Turkish draft plan for a reconstruction project, announced by Erdoğan during his visit to the UN General Assembly in September 2019, proposed settling around 1 million Syrian refugees in a safe zone 298 miles (480 kilometers) long at a cost of around $22 billion (151 billion Turkish lira).

Beyond the benefits accrued by the military-industrial complex and the construction sector, Ankara’s military incursions into northern Syria allowed Erdoğan to garner mass support on two fronts. Despite its unlikeliness, the promise of the repatriation of refugees is an important source of legitimacy for Ankara’s ongoing engagement in Syria—especially given the rising social hostilities against Syrian refugees within Turkey.

Along with repatriation of refugees, preventing Kurdish autonomy under the leadership of the YPG and PYD emerges as another justification. Turkey saw northern Syria as a security threat after YPG advances between 2014 and 2016 led to the foundation of self-administered cantons in Afrin, al-Jazeera and Kobani (Ain al-Arab). The sense of threat was enhanced by the col­lapse of the peace process in Turkey and the renewal of the civil war with the PKK in 2015. The objective of curtailing the YPG and PYD has brought otherwise disparate political actors together, rendering Ankara’s military activism in Syria almost unquestionable within Turkey. The three military incursions into al-Bab and Jarablus, Afrin and the area between Tal Abyad and Ras al-Ain received widespread popular and political support from an amalgam of factions that share a strong commitment to Turkey’s national sovereignty and territorial integrity.

Kurdish and non-Kurdish critics of Turkey’s military incursions into northern Syria have been subjected to severe policing, and at times, imprisonment. For instance, 27 out of 30 university students tried on terrorism charges for protesting Turkey’s military incursion into Afrin in 2018 were sentenced to 10 months of imprisonment.[10] Similarly, hundreds of citizens were taken into custody for their tweets against Turkish military actions in Syria.

The Writing on the Wall in Syria

Decision makers in Ankara have long justified Turkey’s military presence in Syria by citing concerns over border security. Yet, given Turkey’s attempts at establishing an autonomous Sunni Arab corridor in northwestern and part of northeastern Syria, one question remains: where does the at-risk border lie? Is it the official Turkey-Syria border? Or is it the boundary of the Turkey-SNA zone that extends 19 miles (30 km) into Syrian territory? If it is the latter, does this indicate the coming balkanization of Syria given that foreign-local alliances—outside of Syrian regime control—maintain multiple zones, each with their own governance structures?

It is not easy to answer these questions without speculating. Still, state building efforts orchestrated by Turkey in Syria are very tangible. Yet Turkey is not immune to significant challenges from both the international arena and the Syrian domestic sphere. The local Syrian population’s mixed views about Turkish governance, daily fighting among Turkey’s proxies over issues such as taxation and challenges faced by the so-called Free Syrian Police together demonstrate that the Turkey-SNA zone lacks the symbolic power necessary for manufacturing public consent.[11] Moreover, Turkey also lacks full legitimacy at the international level for its actions in Syria. The European Union and other international actors considered Turkey’s latest military incursion in October 2019 a breach of international law.

As for support within Turkey for Ankara’s presence in Syria, it seems that these challenges of legitimacy hardly matter, especially given the strong anti-Kurdish sentiments within the Turkish political class and society. Turkish war-making has been a profitable enterprise for the ruling elites and their cronies. Consolidation of power has, however, come at the expense of political plurality, international credibility and a sense of reality about the limits to this power—a burdensome cost to many when compared with the benefits gained by a few.

Author’s Note: I would like to thank the two anonymous reviewers, Güney Yildiz, Arzu Yilmaz and Gerben Zaagsma for their careful reading of earlier drafts and insightful comments.

Sinem Adar is an associate at the Center for Applied Turkey Studies (CATS) of the German Institute for International and Security Affairs (SWP) in Berlin.

[6] Gregory Waters, “Between Ankara and Damascus: The role of the Turkish state in north Aleppo,” Middle East Institute, June 20, 2019.

Previous Article
The Kurdish Freedom Movement, Rojava and the Left
Next Article
CHP’s Kılıçdaroğlu: Half of Turkey’s population not governed by elected leaders

CHP’s Kılıçdaroğlu: Half of Turkey’s population not governed by elected leaders
NAT 30th July 2020
Submit an Op-Ed
Tweets by NewsAboutTurke1