Powerplay in the Middle East: Turkey is not alone – by Matt Roggo

Powerplay in the Middle East: Turkey is not alone – by Matt Roggo 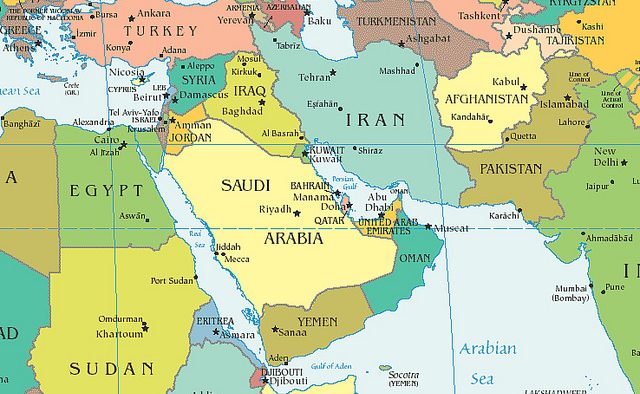 Let me introduce three bullet points and briefly comment on them. This piece is not about human rights, democracy and the presidents of Turkey and Russia. What interests me is the situation in the Middle East. The hope and the argument for the near future is this: Sooner or later, President Erdoğan and his successors will adapt to the new reality, the new reality with its new priorities:

(i) Keeping the West out of Muslim countries, except for cultural exchange and fair trade relations.

(ii) Avoiding a confrontation with Russia in Syria and in Libya, finding common ground with Russia.

(iii) Adapting to the requirements of the emerging China Bloc, that is, nations that want, or are forced, to collaborate with the communist government in Beijing.

If we consider points (i) to (iii) we can see the potential conflict within NATO, an organization with questionable legitimization. It seems that the NATO is defining Russia and China as its main enemies, dangers to be contained by deploying military capacity on land and on sea. This is NATO led by America. A dangerous thing, an absurdity conjuring up the political situation prior to World War I. There must be an alternative to NATO, or at least a countervailing power.

Commenting on (iii) I would add that it is a fundamental mistake to decouple Russia and Turkey from the Western world, but that’s what actually happens. Both authoritarian republics, Turkey and Russia, are heirs to former empires, which is something worth remembering. Apart from that, every nation has vital state interests, be they economical, political or military. Every nation, not only Turkey.

Then there is the hidden American plan to draw a new map of the Middle East. This plan is simple – too simple, as it turns out: one Israel is not enough, America needs another ally like Israel, and that would be a new Kurdish State. The history and claims of the different parts of the Kurdish nation are a topic for another discussion. I do not speak against the Kurdish people. The point I want to make is that a “second Israel” protected by the West would go against the interests of all other actors in the region, not only Turkey – against Syria, against Iraq, against Iran, possibly against Jordan, Israel and Egypt (their common interest is stability). The repercussions of such a landscape change would most likely be observed in other Muslim regions and countries, too.

All this comes down to the central problem in this power game: Turkey’s membership in NATO. That’s the central contradiction when we speak about Turkey. I dare to predict that in the global context described Turkey’s membership in NATO becomes untenable. If a downgrading of Turkey’s status at NATO is possible, that road should be taken. It will be better for all nations involved. Conflicts with Turkey are unavoidable, and this for different reasons, not simply because Turkey is “bad” and the usual blame game in favor of regime change and economic dependence in the interest of the West.

With all sympathy for the Kurdish people – the time for a Kurdish State has not come. Such a state should be legitimate in the eyes of its neighbors. The more it is perceived as a “second Israel” working with and for the USA, the more terror and military activity will result out of it. The creation of a sovereign Kurdish State should be somehow “interesting” to other Muslim nations ceding populations and territories in the process. A new Kurdish State would be doomed if it would be perceived as yet another Western colonial entity representing foreign interests in the region. Now is not the time. Now is the time to end wars. Peace for the next generation. Peace in the name of God, if that’s possible.

It’s one thing to say “Turkey’s government is evil,” and another to grasp what’s really at stake in the Middle East. China’s increasing influence is a matter of fact. Personally, I would not say that China (or any other dictatorship) is a “model state,” but again, it’s important to separate political arguments from moral judgments. Moral judgments have their place, and so has the personal freedom of every citizen, but that should not obfuscate the view on risks and chances for an entire region – the Middle East with its discontent populations and frail borders. China is on the rise, and Turkey and Russia have no other choice than to jump on the rolling train. The West deprives them of an alternative. They are supposed to be nations without strategic interests – something that doesn’t exist.

The grand picture looks very much like this: The powerplay in the Middle East and in large regions of both hemispheres will take place between communist China and its allies (the China Bloc) and nations and organizations in conflict with the China Bloc. China will change the game. With a very weak EU, a quickly regressing USA and a Canada and Australia without the least weight Beijing will take over soon. This is not good. This is not bad. This is change. A new era in the Middle East and far beyond.

I do not attribute the considerable success of China’s export industry and monetary policy to the CCP only. The low-wage and low-protection framework of the communist system (and no-war) is doubtlessly a catalyst, while some results of Chinese communism would be outlived by an eventual system change. However, I do not expect China’s economic and military power to crumble if they ever should significantly deviate from their Maoist course. This is not a pro-China statement, needless to say. This is the future that seems to appear on the horizon. Here is another voice that says the same: China will change the game. Completely. Turkey and the Kurdish people do not stand outside the global context, they are aspects of it:”

(…) China certainly eyes further expansion deeper into the Middle East and eventually develops a direct territorial link with Europe. Therefore, with China’s massive economic presence in the region, it will emerge as a new balancer between rival regional powers, replacing the US. Since the primary nature of Chinese interests and presence is economic, it is unlikely to ignite flames of military conflicts. With China as the new balancer aiming to chart a new geography of trade and bringing the ancient Silk Roads back to life, the logical outcome in the light of progressively reducing US presence and meddling is most likely the redefinition of bilateral relations in the region.”

Matt Roggo, PhD is a Swiss intellectual, a new conservative against racism and globalism. He studied Philosophy and Sociology at Berne, Basel and Geneva universities. He is writing an alternative blog on philosophy and is active on Twitter in the context of the 2020 elections in America. Readers are welcome to contact the author: @SwissFederalist