Peace without the Palestinians: Why Turkey must resist

Peace without the Palestinians: Why Turkey must resist 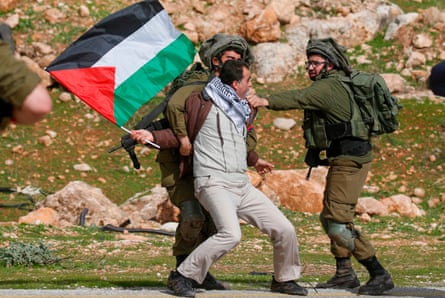 Let’s face it: There is no justice and no peace between Israel and Palestinians. There is absence of war, yes, but otherwise it’s a total stalemate. The demands of the Israeli are not acceptable for the Palestinians, and the demands of the Palestinians are not acceptable for the Israeli. Simple and fatal. The Arabs are divided, as usual, and they still don’t understand that Iran is the strongest power in the region, number two after Israel. Overview over. That’s how it was. That’s how it will be. The cynical truth. A tragedy.

Now to Turkey under Erdoğan. Turkey is entangled in a net of contradictions. This is not Machiavellian politics. This is burning your house down. Turkey’s strategy is no strategy at all: Today this, tomorrow that. Turkey against the rest! This is much worse than a Turkey neutralized through an EU membership under the wings of Germany. Turkey is still a member of NATO. As such – and in concert with the leading culprits US / UK – it is participating in the crimes against the Syrian state and the Syrian people. If you are not completely out of your senses you understand that this is the policy of a sick old man on the Bosporus, of a dysfunctional Turkish government. If Turkey would be a vigorous young man with a vision (to use such an appealing metaphor) it would either act as a mediator, or, if not willing or able to rescue its ailing neighbor Syria, stay away from the battle field altogether (no soldiers, no terrorists, no weapons). The worst damage to Turkey’s long-term interests is the fact that its hurtful policies and its Kurdistan paranoia is pitting it against its most potent potential allies: Iran, Russia, and yes, Syria, or what remains of Syria. Iran and Russia – soon the “bulldogs of China” in the Middle East – are pro-Syria and pro-Palestine, as they should be. Iran is against the new business partners Israel and Saudi Arabia, a position that makes sense from the Iranian regime’s perspective. Iran is keenly aware of a possible regime change war waged by NATO members in partnership with Israel and Saudi Arabia. A prohibitive prospect for Turkey. Turkey can never engage in a protracted war against Iran, and it should not, not as long as Turkey is a Muslim country. Democrat hawks and born again neocons in Washington considered a war against Iran since the Obama years. Luckily for the rest of the world, Secretary of State Hillary Clinton couldn’t pull it off. The result of her reflexes would have been disastrous. God is merciful!

Turkey pretends to stand for Islam and to endorse the Palestinian cause, as Iran does. And it makes the same mistake as Iran: making use of terrorist groups, thereby giving the West a welcome pretext for intervention “to protect human rights,” etc. The time has come for Turkey to realize that the big red sun of China is rising over our heads. The NATO allegiance and Russia, Iran and Syria as official enemies prove to be an absurd position. Rather than dancing at two weddings, Turkey should seek its influence and advantage by promoting and aligning itself with the coming China Bloc and abandon the nervous, anachronistic positions of NATO member states. NATO can’t build military facilities in Ukraine, in Belarus, in Finland and in the Baltic States without provoking Russia and poisoning relations with Moscow. NATO can’t fight a war against China on Taiwan’s behalf, and we better not mention North Korea. All of this is military-industrial complex nightmare dreaming behind bombproof walls. A huge business and a maximum of destruction in a minimal lapse of time. One day President Erdoğan will understand the contradiction in the present Turkish position. And if not Erdoğan, then his successors.Let me put the message straight: Either it’s “Turkey with China” or “Turkey against the rest.” Today this, tomorrow that, and Turkey against the rest of the world will be the nation’s demise. Turkey will sink to Third World status after two or three generations. Total global insignificance, a bit like Canada, but economically on crutches. Turkey must now get its act together and face the future. A strong Turkey with a coherent foreign policy is in the interest of the Middle East. The incoherent noise out of Ankara is unacceptable. Turkey needs a serious conservative profile with a foreign policy that puts Turkey’s interests first (which is normal), with priorities that can be understood by other governments, and the readiness to participate in the actual wind of change: the Middle East of the 21st century with communist China as hegemonic power. In other words: Turkey should become more like Russia.

Now let me explain how the patronizing “peace process” with Israel will turn out (I will mimic corporate media talk). Take the Arab nations A, B, C and D negotiating with the Trump government (with Jared Kushner and his staff), and among one another. They agree on more symbolic gestures and sign “historic peace treaties” with Israel – without Palestinian representation, of course, but “in the interest of Palestinians.” This “season of hope” and “wind of change” will benefit the nations A – D immensely, while nothing changes on the ground beyond the flurry of media symbolism. On the other side of this uneven equation stand “the Palestinians,” you know, the trouble makers and terrorists of yore we will now call “our friends” for convenience. The buck is then passed to the Palestinian camp for being “negative” and for “missing an historic opportunity.” And then, suddenly, a terror attack out of nowhere – or a violent encounter near a Jewish settlement. Aye, and what then? Back to normal! No, not “normalization,” but flat out “normal.” A conflict without solution. Or with a solution: the capitulation of the Palestinian side.

Turkey may have three ways of looking at this: (1) the continuing conflict is an open-end scenario, that is, an occasion to meddle, to forge new alliances, to do military maneuvers, etc., (2) conflicts all over the Middle East are useful to prevent an independent Kurdish State supported by the West, or (3) a Palestinian state will be a victory for anti-West and anti-Israel forces in the region and reset the power equilibrium in favor of Turkey’s natural allies Russia, Iran and Syria. At this time the Turkish government under Erdoğan is far from that insight and from an awareness of the alternative “China or the West.” Turkey has yet to understand the sea change brought about by China. Once Turkey learns to anticipate the future, it will be on the winning side, and the EU and NATO are things of the past. The coming of China and the displacement of Western interventionism – that’s the key to the new Middle East. In the meantime, Turkey should do at least 10% right, and that’s resisting a patronizing plot to isolate Palestinians, provoke Iran, and further assault Syria. The map of the Middle East is a post-imperial and post-colonial mess, but no-one has the power and the acuity to change it. If you can’t change it, keep it. Keep it and send foreign soldiers home. Do it now!

Matt Roggo, PhD is a Swiss intellectual, a new conservative against racism and globalism. He studied Philosophy and Sociology at Berne, Basel and Geneva universities. He is writing an alternative blog on philosophy and is active on Twitter in the context of the 2020 elections in America. Readers are welcome to contact the author: @SwissFederalist

The Print (India) on the Israel / UAE treaty: https://theprint.in/world/uae-and-israel-deal-is-neither-a-peace-treaty-nor-will-it-end-the-palestine-conflict/486981

The crimes against the Syrian state and the Syrian people are documented by investigative journalist Vanessa Beeley: www.globalresearch.ca/author/vanessa-beeley

Previous Article
Women’s organisations in Turkey outraged by the quick release of soldier accused of repeatedly raping a Kurdish teenager
Next Article
Is Erdogan trying to split NATO with his East Med gambit?

Is Erdogan trying to split NATO with his East Med gambit?
NAT 28th August 2020
Submit an Op-Ed
Tweets by NewsAboutTurke1