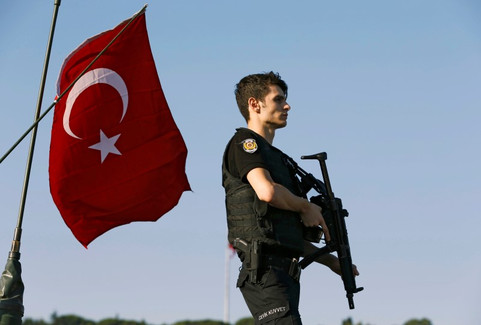 After a little over a year in Brussels as an MEP, and closely following the EU’s foreign affairs, it astonishes me how ineffective the European Union leverages its power on the world stage.

At this very moment, a mid-sized power named Turkey is punching above its weight by interfering in multiple conflicts in the Mediterranean region in a bid to defend its geopolitical interests and we are letting it happen right under our noses.

With a military presence in Libya and Syria, Turkey exercises considerable influence in these conflicts.

By contrast, the EU merely has its naval Operation Irini in place near the coast of Libya, which plays a modest role in enforcing the UN arms embargo.

EU foreign affairs chief Josep Borrell has limited options in his foreign and security policy instruments and can only resort to intensifying diplomatic efforts, alas with little effect.

To put it simply, the EU is not a geopolitical factor of importance in conflicts in the Mediterranean region. This is baffling.

The EU has great interest in ensuring stability, cooperation and progress in our direct neighbourhood. Yet, we stay on the sideline and let others intervene.

The escalating conflict between Turkey and EU member states Greece and Cyprus about the exploration of gas in the eastern Mediterranean Sea is a testament to this sad conclusion.

The most recent development, namely Turkey threatening Greece with war, should be cause for all European member states to stand in full solidarity with both Greece and Cyprus.

Unfortunately, the opposite is true.

Various individual interests of member states leave the EU completely divided with the absence of a joint strategy as a result.

Our leverage potential, as the second economic block in the world, can only be achieved if we act as a united front. When we fail to do so, we effectively allow Turkey to take advantage of our strategic weakness. In the meantime, Josep Borrell endlessly calls for ‘dialogue’ and has warned to impose sanctions on Turkey so many times that it can only be described as an empty threat.

The EU’s response to offensive Turkish behaviour has a complete predictability and proves ineffective.

The repetitive calls for de-escalation through mediation and dialogue are proof that soft power cannot be Europe’s answer to everything.

Just in the last year, Turkey invaded northern Syria, ‘opened up’ its gates to Europe for migrants, embarked on a military intervention in Libya, threatened a French frigate, illegally searched for gas fields in the eastern Mediterranean, bought crucial Russian military equipment and now openly threatened a European member state and fellow Nato-ally with war.

This unilateral Turkish behaviour is paralysing Nato coherence and cooperation.

Looking at this depressing (and sadly, impressive) list, we can clearly conclude that the EU’s current policies and strategy towards Turkey are not working.

In fact, the EU-Turkey relationship is worsening with no end in sight, while Turkey pursues its interests, with no regard for and at the expense of the EU’s interests.

It is time for the EU to find its voice as a ‘geopolitical player’ and use it accordingly.

Simultaneously, we need a complete revision of EU-Turkey relations. Starting by thinking more strategically about this relationship, acknowledging the importance of Turkey and the value of good neighbourly relations, but also by finding a new balance in our cooperation on many vital aspects such as security, migration and trade.

Aside from needing to re-evaluate our relationship with Turkey in general, right now Europe needs to show unity and unconditionally back the Greeks and Cypriots.

Calling on improved dialogue cannot be our only answer any longer. Instead, I propose we immediately start the process of ending Turkey’s status as a candidate EU member state.

Finally, the European Council should impose severe sanctions, if Turkey chooses the path of further escalation.

In the drafting of these sanctions, everything should be on the table: the cost to Turkey’s interests must be severe in order to result in the desired deterrent effect.

We should make very clear that certain actions have repercussions and that we will not tolerate this behaviour.

Previous Article
Turkey’s virus deaths rise to levels not seen since May
Next Article
Does France’s failure in Mali spell a victory for Turkey?

Does France’s failure in Mali spell a victory for Turkey?
NAT 15th September 2020
Submit an Op-Ed
Tweets by NewsAboutTurke1