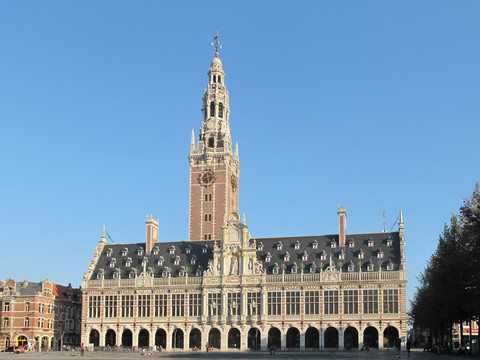 It now seems Turkey’s president Recep Tayyip Erdoğan is not been satisfied with scores of schools he banned at home, and aims to carry out his crusade outside Turkey’s borders.

His latest target is the Gülen Chair, created at Catholic Leuven University back in 2010.

Leuven’s catholic University, one of Belgium’s best universities, has decided to close one of its respected yet controversial chairs.

And many say the chair is being closed not because of an academic failure or a scandal, but as a result of the Turkish government’s relentless pressure.

By bowing to pressure from an authoritarian leader, Leuven University sets a dangerous precedent that would result in less academic freedom but more self-censorship.

The Fethullah Gülen Chair was founded in 2010, and has successfully given PhD degrees and instructed hundreds of students.

However, the new administration of the university has abruptly decided not to renew the contract of the chair.

Professors who have critised the decision point at Erdoğan’s long arm, and the lack of resistance from Leuven University.

After the coup attempt of July the 15th, 2016, Erdoğan closed 15 universities inside Turkey by various presidential decrees.

In another serious blow to higher education in Turkey, hundreds of academics were dismissed just because they asked for a peaceful end to the Kurdish conflict. Their only ‘sin’ was to sign a petition.

In its statement, Leuven has argued that it was not closing the chair but not extending its contract, which expired in August 2020.

So far, the university has denied any political pressure from Ankara.

However, it is a known fact that the Erdoğan government wages a global all-out war against Gülen movement in the wake of the botched military coup of 2016, with Ankara accuses Gülen of masterminding.

European intelligence services, however, have so far not bought the Turkish version of the coup, and refused to list Gülen movement as a terrorist group.

Turkish pressure intensified after the coup attempt, but the former rector, professor Rik Torfs, fought against the Turkish onslaught.

Speaking to EUobserver, Torfs said the decision by the new rector was “shameful” for academic independence.

Torfs added that he had a similar meeting with the Turkish ambassador in 2017 – and made clear that he would not cave in to any blackmailing.

“On the table there were two issues. First was the recognition of our diplomas by the Turkish authorities. Secondly the excavations at Sagalassos in Turkey carried out by the Leuven University. We made it very clear that we would not be blackmailed” Torfs said.

Sagalassos is an archaeological site in southwestern Turkey, about 100km north of Antalya.

Since 1990 Sagalassos has been a major excavation project, led by Marc Waelkens of the Catholic University of Leuven.

Faced with Leuven’s resistance, Turkish authorities listed the Belgian university as an organisation supporting terrorism, refused to recognise the diplomas of the university, and threatened to stop the excavations at Sagalassos.

Torfs complained that universities these days are managed like companies, with business-like approach.

“For me academic freedom and independence are important. Diversity of opinions is richness. Unfortunately it is now the time of company-like universities.”

Erdoğan and his government often brag about the global war they are waging against the Gülen group.

Hundreds of Gülen followers have been snatched from the countries where they live by clandestine operations, which the EU has called “illegal”.

Many Gülen-affiliated schools in Africa have been transferred to Turkish government-controlled foundations, under Ankara’s pressure.

Professor Johan Leman, the first chair holder of the Gülen Studies post, told this website that as soon as the new rector was elected, he was invited to Sagalassos by the Turkish authorities.

“Apparently he ‘understood’ during this visit that Ankara was expecting him to close the Gülen Chair at the end of its tenure”, Leman said.

In a written statement, Leuven University has argued that the academic interest in the chair has also fallen dramatically.

“I think this is not true. When I was teaching I always had at least 100 students in each course. On the top of it, in the last six months we had the pandemic, it is only normal that the inscriptions would decrease”, said Leman.

Professor Leman has no doubt that the chair was closed by Turkish government pressure, and that that will tarnish the reputation of Leuven University.

Mehmet Bayrak, chairman of the IDP, the Gülen-affiliated platform which finances chair, said he was deeply disappointed that Erdoğan’s attack on academic freedom has seemingly won a battle in Europe.

All over Europe, populist leaders are on the rise. They hate liberal democracy and demand a docility in the press, courts and universities.

European universities should not be an accomplice in their authoritarian march.