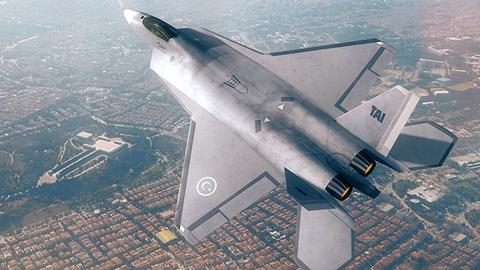 Right now the TF-X is all plywood, paint and bold claims. It’s likely to remain so.

Here’s What You Need To Remember: In working on its own radar-evading warplane, Ankara might simply be trying to prove to Washington that it can threaten the F-35’s near-monopoly on stealth-fighter exports, either by building a plane of its own or helping Russia to finish the Su-57.

The mockup of the TF-X fighter bears a resemblance to the U.S. Air Force’s own F-22. But whereas the F-22 is a real, front-line warplane with an actual combat record, the TF-X is unlikely to even get built.8.8M5.2KProblem China’s J-20 Stealth Fighter Doesn’t Have a Gun

Developing a stealth fighter is expensive. Just three countries in theory can do it without spending themselves into a crisis: the United States, China and Russia.

And just two of them — America and China — actually have done it. Russia’s Su-57 program has struggled to reliably produce meaningful numbers of working planes.

Turkey, with the world’s 17th-largest economy, is unlikely to join that exclusive club.

The War Zone reporter Joseph Trevithick has written the best explainer on the likely-doomed Turkish fighter.

The Turkish government first announced the TF-X program, also known as the National Combat Aircraft, which abbreviated MMU in Turkish, in 2010. TAI won the contract to develop the aircraft, in 2015.

The Turkish air force plans to eventually replace the bulk of its American-made Lockheed Martin F-16C/D Viper fighter jets with this indigenous design and hoping to have the first examples enter service as early as 2028.

Since 2015, TAI has proposed at least three different configurations, including two single-engine variants and a twin-engine type. The mock-up is of the twin-engine concept, which is the one the company had settled on previously.SPONSORED CONTENT

The TF-X looks great. The problem is money. It costs around $100 billion in total to develop, build and operate a fleet of a few dozen stealth fighters, according to an assessment by Japanese air force general Hideyuki Yoshioka, who in 2011 helped to oversee Japan’s own boutique stealth-fighter program.

The figure checks out. The United States has spent around $70 billion developing and building 194 F-22s plus billions more operating them since 2005. The Pentagon expects to drop no less than $400 billion on around 2,300 copies of three versions of the F-35, not including operating costs.

Turkey by contrast spends just $20 billion annually on its armed forces. Try squeezing a $100-billion stealth fighter into that budget.

And don’t count on exports to make the TF-X cheaper. The F-35 easily dominates the world market for stealth fighters, and should continue to do so for many years.

The TF-X is an example of what Teal Group analyst Richard Aboulafia calls “national fighter concepts” – that is, advanced combat aircraft tailored to the needs of a single country and lacking strong export potential.

Of course, it’s possible Turkey doesn’t really plan on fully developing the TF-X. The fighter concept might just be leverage as Ankara squabbles with Washington over the Turkish military’s competing efforts to buy both U.S.-made F-35 stealth fighters and Russian-made S-400 air-defense systems.

The Russian system could gather sensitive data on the F-35 and render the type more vulnerable. Washington has suspended Turkey’s participation in the F-35 program unless it cancels the Russian deal.

The Turkish government in return has threatened to partner up with Russia on the faltering Su-57 program.

In working on its own radar-evading warplane, Ankara might simply be trying to prove to Washington that it can threaten the F-35’s near-monopoly on stealth-fighter exports, either by building a plane of its own or helping Russia to finish the Su-57.

Even that strategy seems likely to fail. The F-35 program is big enough to survive without Turkey and to steamroll any competitor. And Turkish investment might not be enough to save Russia’s own stealth fighter.

Right now the TF-X is all plywood, paint and bold claims. It’s likely to remain so.

TAI CEO Temel Kotil claimed the fighter would fly by 2025. Be skeptical.

David Axe served as the former Defense Editor of the National Interest. He is the author of the graphic novels  War Fix, War Is Boring and Machete Squad. This article is being republished due to reader interest.