Turkish President Recep Tayyip Erdogan has for nearly two decades taken strides to transform Ankara’s place in the world. Today, his dreams seem further from reach than ever before.More than 10 years ago, then-Prime Minister Erdogan made a decisive foreign policy pivot. No longer would Turkey grovel at the gates of the European Union, begging to be let in. Instead, Turkey could once again project regional strength, expand its influence over its former imperial subjects in the East, and become a global force to be reckoned with.It was an idea that captured the imagination of his popular base, buttressing his bid to maximize the breadth of his powers. Erdogan’s allies in Egypt and Syria made huge political gains in the early years of the Arab Spring, which first began in December 2010 and Erdogan’s Neo-Ottoman dream appeared to be materializing.

But fast-forward a decade, and the President’s allies in the region — largely groups affiliated with the Islamist Muslim Brotherhood — are a grossly diminished force. Outside of regional bastions of support in Qatar, Somalia and the Tripoli-based government in war-torn Libya, Erdogan’s power projection has left a bitter taste in the mouths of many regional leaders. 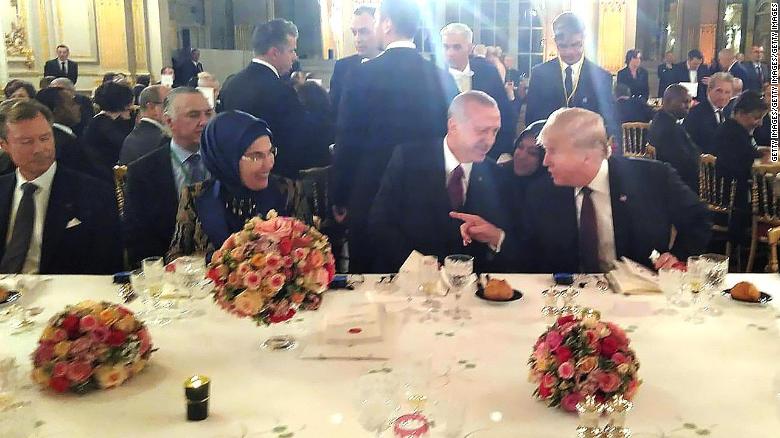 US President Donald Trump and Turkish President Recep Tayyip Erdogan sitting next to each other and chatting at a dinner hosted by French President Emmanuel Macron on November 10 2018 in Paris.

He’s also drawn the ire of European countries, namely France, Greece and Cyprus, which have publicly tried to contain Turkey’s reach in the eastern Mediterranean. A floundering Turkish economy, exacerbated by the effects of Covid-19, has thrown another wrench in the works of Erdogan’s project, and limited his ability to shake off Turkey’s growing isolation.”Erdogan’s slogan was that Turkey was going to rise by and through leadership over Muslim-majority states in the Middle East,” said Soner Cagaptay, Beyer Family Fellow and Director of Turkish Research Program at The Washington Institute for Near East Policy, and author of a trilogy of books about the rise of Erdogan.

“But now with the exception of Qatar, Somalia and half of the government of Libya, it has good ties with no Muslim majority country nearby.”Those regional powers hostile to Erdogan appear to have found common cause with some European countries. Egypt, Israel, Cyprus and Greece have intensified strategic cooperation over several initiatives, namely the extraction of gas reserves in the eastern Mediterranean, and have sidelined Ankara in the process. France, which has opposed Turkey’s campaign against Kurdish fighters in Syria and its backing of the Tripoli-based government in Libya, has lent support to the eastern Mediterranean energy initiative. The United Arab Emirates — which has backed efforts to quash, sometimes brutally, Turkish-backed groups — appears also to have given tacit support to the endeavor.The US administration of President Donald Trump, which has largely maintained a good relationship with Erdogan, has also recently appeared to side with Turkey’s rivals. Recently, Secretary of State Mike Pompeo said he was “deeply concerned” with Turkey’s actions in the eastern Mediterranean. Last month, the US also announced it would waive a decades-old arms embargo on Cyprus. 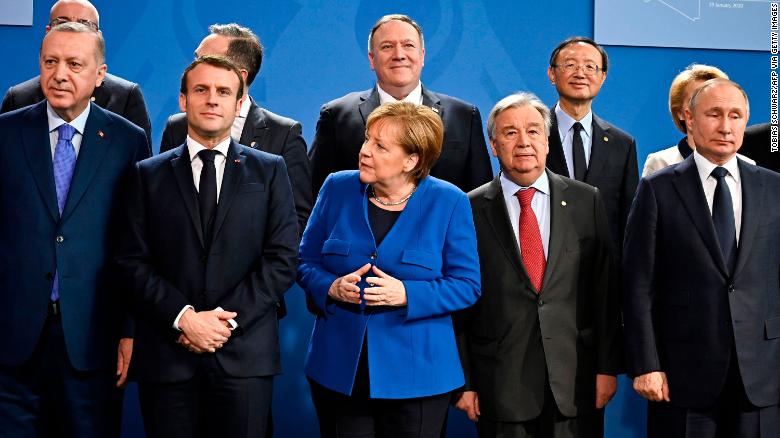 World leaders gather in Berlin on January 19, 2020 to make a fresh push for peace in Libya, in a desperate bid to stop the conflict-wracked nation from turning into a “second Syria”.

“All of this didn’t happen overnight. It happened as a consequence of (Ankara’s) more assertive, more conflictual and more combative foreign policy,” said Sinan Ulgen, a Turkey analyst and Visiting Scholar at Carnegie Europe. “I (also) think the EU, and the US particularly did mismanage the relationship with Turkey.

“Nonetheless, this is the outcome. Therefore all of this coalescing at this moment in time. But it did take 10 years to come to this point.”Turkey’s muscular foreign policy recently culminated in its support for Azerbaijan’s military campaign to retake the separatist region of Nagorno-Karabakh. The renewed conflict, which pitted Azerbaijan against neighboring Armenia, has claimed hundreds of lives. Erdogan has gone his own way, once again, refusing to join the international community’s call for a ceasefire.Ethnic kinship between Turkey and Azerbaijan, and a growing bilateral military relationship, can be seen as driving forces for Turkey’s staunch support for Baku’s bid to retake the majority-Armenian enclave of Nagorno-Karabakh and other territories are under Armenian military control, analysts say. But so does an urgency for Erdogan to call foul on the international community. Nagorno-Karabakh is internationally recognized as a Azerbaijani territory, a point that the Turkish leader wishes to underscore.Erdogan’s stance on Azerbaijan’s conflict “goes well with Turkey’s rhetoric about the double standards of the international community and the ineffectiveness of multilateral institutions,” said Ulgen.”When a Turkish president comes to power or a prime minister, the first thing they do is they pay a visit to Turkish Cyprus and Azerbaijan,” said Cagaptay. “Erdogan has broken with all traditions of Turkey, with the West, with Israel, with the EU, with the Middle East. But he has not broken with that tradition.”

Economy in the doldrums

But circumstances that enabled Erdogan to revolutionize Turkey’s foreign policy have evaporated, analysts say. In the early 2000s, Erdogan produced excellent economic results, bolstering his bid for both domestic and foreign policy transformation. Today’s Turkish economy is a far cry from that, which led to sizable losses for Erdogan’s party in municipal elections, and may eventually prompt a retreat from the international scene.The first decade or so of Erdogan’s rule saw millions of Turks being lifted out of poverty, an economic boom, further diversification of the Turkish market, and even a precipitous drop in infant mortality rates. In recent years, however, the currency has sometimes taken a nosedive, government debt has ballooned, and inflation has risen. As with many other economies, the Turkish economy is expected to shrink in 2020, but may recover next year. 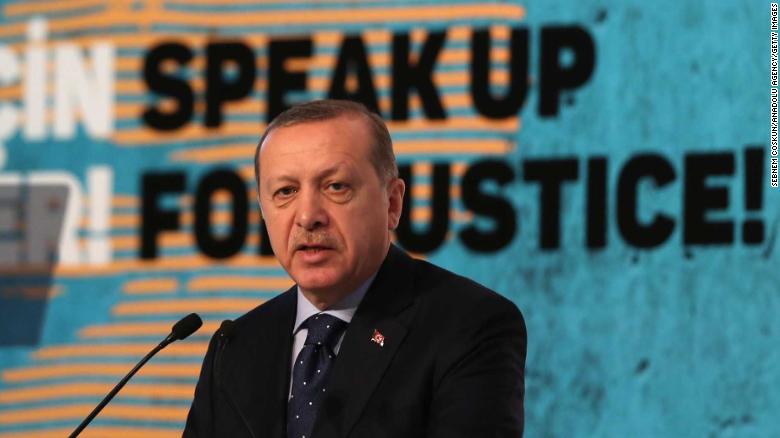 “The economy is Erdogan’s Achilles heel, not only domestically but also in foreign policy,” said Cagaptay. “Not only does the economy determine if Turkey can continue to flex its muscles, but if the economy tanks, Turkey won’t have the budget to devote to all these battles and fronts.”Turkey’s economic future is intimately tied to its international relationships. A tanking economy could lead to a request for International Monetary Fund assistance, which could come with foreign policy strings attached. An internationally unpopular Turkey could miss out on badly needed gas extraction prospects in the eastern Mediterranean.”That’s the major dilemma facing Turkish policy makers, it’s not the limits on foreign policy assertiveness per se. It is what that foreign policy assertiveness and combative rhetoric does to the country’s economic prospects,” said Ulgen.