The Turkish lira is on its worst losing streak since 1999

The Turkish lira is on its worst losing streak since 1999 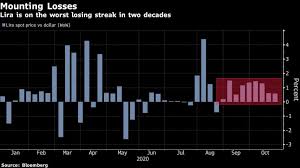 Turkey’s lira headed for its longest weekly slide since 1999, abandoning a tentative rebound after the central bank spooked investors by refraining from an interest-rate hike just when economic and geopolitical risks are mounting.

The ninth week of declines also took the currency closer to the psychological 8-per-U.S. dollar mark, underscoring markets’ concern that the country’s monetary policy remains too loose for its economic and credit conditions

After an unexpected rate hike in September encouraged wagers that the central bank had shifted to a hawkish stance, policy makers surprised the markets by keeping the policy rate on hold in their latest meeting Thursday. While the bank continued tightening by expanding another rate corridor, traders saw it as inadequate to defend the lira.

“The willingness is not there yet,” said Viktor Szabo, a senior fixed-income manager at Aberdeen Asset Management in London. “Years of policy mistakes are now culminating in the loss of reserves and pressure on the currency. Yesterday’s decision also underlined that authorities are not willing to slow down credit growth, which is essential to restore the balances.”

The current streak of losses evoked memories of 1999, a turbulent year for Turkey. The government was dissolved, early elections were called, and two devastating earthquakes killed thousands. The troubles eventually led to the economic crisis of 2001.

Low real rates and waning foreign-investor interest in Turkish assets are piling pressure on the lira as the country faces the risk of U.S. sanctions, disputes in the eastern Mediterranean and Caucasus and economic pain from the pandemic. Turkey has already spent foreign-exchange reserves faster than any other major developing economy in a bid to support the currency. Foreign investors sold $13.3 billion of Turkish equities and bonds this year, the most since at least 2005.

The drop in the lira is the latest blow for a currency that used to trade almost at par with the U.S. currency less than two decades ago. It has posted losses every year since 2012, pressured by the credit-driven economy’s dependence on imports and dollar funding as well as a monetary policy that’s usually criticized by investors for being too loose.

Turkey could benefit from a competitive lira in a move toward an export-focused economy, Treasury and Finance Minister Berat Albayrak said in response to emailed questions from Bloomberg last month.