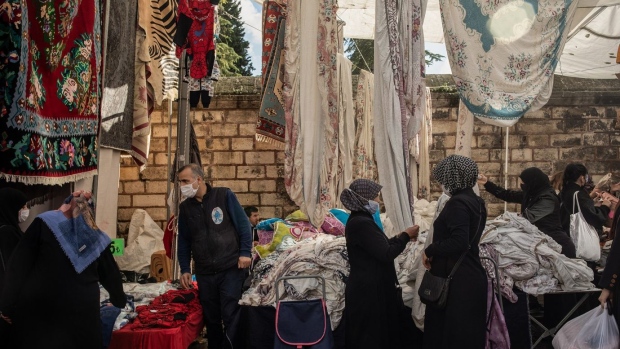 (Bloomberg) — The lira’s best week in almost two decades may have done little to restore faith in the currency among many Turks.

Demand for dollars among local companies and individuals barely slowed last week, even as the lira soared more than 10%, according to five currency traders at private lenders who asked not to be identified because they’re not authorized to speak publicly. The currency paused its rally on Monday, slipping 0.9% to 7.7257 versus the greenback.

While overseas investors were piling into the lira on signs President Recep Tayyip Erdogan won’t stand in the way of a long-awaited interest-rate hike this week, locals and companies pounced on the opportunity to use a stronger currency to acquire dollars, the traders said.

“Local retail investors were unwilling to sell their hard-currency deposits last week,” said Onur Ilgen, head of treasury at MUFG Bank Turkey. “On the contrary, they were gradually buying the U.S. dollar after the pair broke below the 8 handle.”

Foreign-currency deposit accounts rose more than $1.5 billion in first three days of last week, according to data from the Banking Regulation and Supervision Agency. Companies have almost $53 billion of foreign-currency debts coming due in a year or less, central-bank data show.

The lira has weakened every year since 2012, encouraging Turks to keep their assets in foreign currencies or gold accounts even when the currency is strengthening.

Locals’ total foreign-exchange deposits were at an all-time high of $224.2b billion as of the week ended Nov. 6, according to central bank data.

Previous Article
Paralyzed woman sentenced to prison on alleged terrorism charges
Next Article
Turkey vs. the West: A Tug of War Beyond the Aegean

Turkey vs. the West: A Tug of War Beyond the Aegean
NAT 16th November 2020
Submit an Op-Ed
Tweets by NewsAboutTurke1