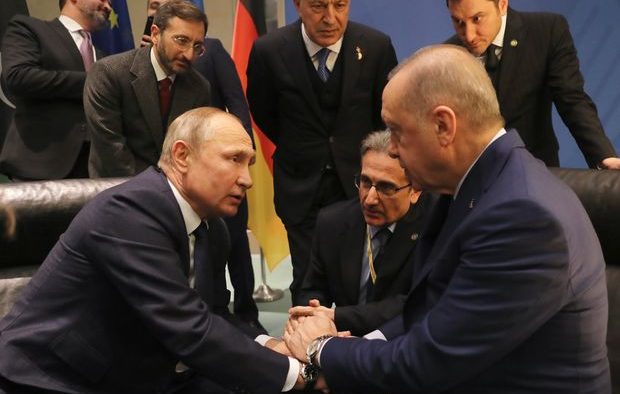 Turkey is seeking to mend relations with traditional western allies and regional powerhouse Saudi Arabia as rifts with Russia, Joe Biden’s U.S. election victory and the threat of European sanctions force a foreign-policy rethink, people familiar with the discussions said.

After he was sworn in with sweeping executive power more than two years ago, President Recep Tayyip Erdogan made a high-stakes pivot away from the pursuit of closer ties with the West. Turkey veered closer to Moscow, alienating and antagonizing fellow members of the North Atlantic Treaty Organization.

Recent events have changed the calculus, the people said.

Ankara’s interests are increasingly at odds with those of Russian leader Vladimir Putin. Russia and Turkey were on opposite sides in Libya’s war before a truce was agreed, and have clashing aims in Syria’s conflict. Turkey then muscled into Russia’s Caucasus backyard with its support for Azerbaijan in the 44-day war with Armenian forces over Nagorno-Karabakh.

Then there’s the U.S., where President Donald Trump, who declared his personal rapport with Erdogan even while they quarreled, is leaving the White House. And in Europe, leaders are set to discuss penalizing Turkey for its unilateral energy exploration in contested waters of the Mediterranean at a European Union meeting starting Dec. 10.

Sanctions would imperil Turkey’s economic recovery from pandemic restrictions just weeks after a new team of top officials began attempts to get to grips with a collapsing currency.

Erdogan is sounding conciliatory. “We don’t have issues with any country or institution that cannot be solved through politics, dialogue and negotiation,” he said on Sunday as he urged the EU to help overcome obstacles holding up Turkey’s bid to join the bloc and abide by agreements on customs and visa-free travel. “We express the same wish in relations with our ally America.”

Officials have hinted that Turkey, in a bid to avert U.S. punishments, would ring-fence from NATO systems the Russian-made S-400 air-defense missiles it bought and tested. Erdogan has sent his envoy to Brussels to de-escalate tensions with the EU.

Still, repairing ties also roiled by western support for Kurdish fighters in Syria and U.S. charges against a major Turkish bank for sanctions-busting, won’t be straightforward.

Biden last December derided Erdogan as an autocrat and pledged to bolster his domestic opposition, while Ankara’s military cooperation with Russia alarmed NATO powers who can be expected to drive a hard bargain before again fully embracing Turkey. Turkey’s drilling for gas in the Mediterranean has upset Greece and Cyprus, and Erdogan has rowed with French President Emmanuel Macron over the latter’s comments on Islam.

Trump suspended Turkey from helping build the F-35 fighter jet after the Russian missile deal, yet Congress is pushing for harsher penalties. It’s considering legislation that would force the president to impose sanctions on Turkey for flirting militarily with Moscow.

According to the people who discussed Turkey’s change of heart, Ankara believes Biden’s enduring faith in multinational institutions and transatlantic ties will help it repair damage with NATO partners and improve the likelihood of long-sought weapons deals. Turkey’s footprint in Middle East battle zones boosts the alliance’s ability to contain an expansionist Russia, they said.What’s moving marketsStart your day with the 5 Things newsletter.EmailBloomberg may send me offers and promotions.Sign UpBy submitting my information, I agree to the Privacy Policy and Terms of Service.

Turkey wants to develop its defense industry, preferably through production of tanks, missiles and warplanes with NATO allies. It’s pushing Canada to end its export ban on some drone technology, the people said, and wants France to agree joint production of Eurosam missiles. Russia has so far failed to deliver on expectations it would transfer technology used in the advanced S-400 or undertake joint production, they said. Similar demands by Turkey blighted its efforts to secure U.S.-made Patriot missiles.

Erdogan separately used a phone call with Saudi Arabian monarch Salman bin Abdulaziz to express his desire to heal ties with the kingdom, the people said. The countries’ relations neared collapse after Saudi agents murdered Washington Post columnist Jamal Khashoggi, a critic of the Gulf kingdom’s leadership, at the Saudi consulate in Istanbul in 2018.

Turkey, which charged two top aides to Saudi Crown Prince Mohammed bin Salman for ordering the killing, has done all it can to shed light on the murder, but it’s now time to focus on bilateral issues, the people said. Interviews at stores in Riyadh suggested an unofficial boycott of Turkish goods by Saudi authorities may already be easing.

— With assistance by Donna Abu-Nasr