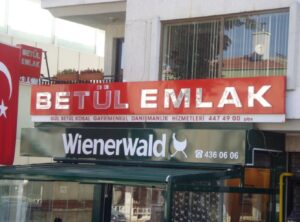 A Turkish real estate agent who operated in a district where foreign embassies and ambassadors’ residences are located in the capital city Ankara was investigated for an espionage on behalf of Iran, confidential documents obtained by Nordic Monitor have revealed.

According to the documents, Gül Betül Kobal, owner of a real estate firm Betül Emlak who was detained in the past for her alleged links to an organized crime network, was subject of a secret investigation by the police after a tip alerted about her suspicious links to Iranian embassy officials who were later listed as key suspects in the terrorism investigation.

Kobal was caught the attention of the police twice in the past before her alleged links to Iranian intelligence surfaced in 2012. According to the file in the police records, she was detained on September 3, 2010 as a suspect in an organized crime network led by Vedat Inci who took over the leadership in the crime syndicate after the death of notorious gangster Lokman Çetin. Kobal was released by a judge in the arraignment hearing pending trial at the time.

She was also flagged when her business phone was found on the seized documents when a multi-national police crackdown on the cells of a militant Marxist-Leninist organization the Revolutionary People’s Liberation Party (DHKPC) on April 1, 2004. Kobal was at the time working as manager in a real estate firm Biyen İnşaat Ticaret İç ve Dış Ticaret Limited Şirketi. DHKPC was listed as a terrorist organization by Turkey, the United States and the European Union. The group claimed responsibility in a number of terror attacks including a suicide bombing at the US Embassy in Ankara in 2013.

The anonymous email, sent to the police hotline on October 12, 2012, claimed that Kobal had been spying for Iran and passing private information about Turkish nationals as well as state secrets to an Iranian operative in exchange for a cash.

The information was forwarded to the intelligence and counterterrorism departments for investigation and the National Security Directorate (Emniyet) was informed about the tip on October 24, 2012.

The police confirmed that Kobal has been operating in the district where many foreign embassies are located. It also verified that she had a contact with a number of Iranian embassy officials including political counsellor Ali Hassan Salami, Iran’s Cultural House manager Seyed Asghar Seveotorabi and embassy staff Majid Feyzollajd. The phone records obtained by the police further showed that she had been on contact with a number of other Iranian officials as well.

However, the preliminary investigation in Ankara provincial department failed to find a solid evidence showing that Kobal was engaged in espionage.

A copy of the tip and preliminary investigation report was later incorporated into the confidential terrorism investigation pursued by the Office of Chief Public Prosecutor in Istanbul which had been investigating the Islamic Revolution’s Guards Corps (IRGC) Quds Force activities since 2011. The investigation in Istanbul already identified a number of Quds Force operatives and their Turkish contacts and collected overwhelming evidence to take the case to the court.

Interestingly enough, among suspects listed in the prosecutor’s investigation file was Salami, Iranian embassy political counsellor, as well as Seveotorabi. They were placed under surveillance and their phones were wiretapped with an investigating judge’s order. In other words, real estate broker had in fact been in a contact with IRGC suspects who were operating in Turkey under the diplomatic cover as embassy officials. Istanbul prosecutor was about to wrap the probe and indict suspects which would result in their detention before the trial starts. However the government of President Recep Tayyip Erdogan stepped in to quash the probe into Quds Force.

Alerted about the ongoing investigation into the IRGC Quds Force in December 2013 after a corruption probes — that were made public and incriminated then Prime Minister and now President Erdoğan, his family members and his political and business associates –, the government hushed up the Quds Force probe. The investigating prosecutor was sacked before he filed the indictment against Quds Force suspect in a case that was branded as the most comprehensive espionage investigation ever conducted in Turkey with tens of thousands of pages that included surveillance videos, photos, wiretap transcripts, financial records and witness statements.

It would have been possible that Kobal would be incriminated in Istanbul investigation. She was in clear when her contacts fled Turkey after the secret investigation was exposed in a pro-government media which framed the case as bogus.

Previous Article
Organization set up by former Erdoğan aide is starting to train hit squads
Next Article
Turkish President Erdogan’s bodyguard, wanted by the US, engaged in covert intelligence ops in Libya