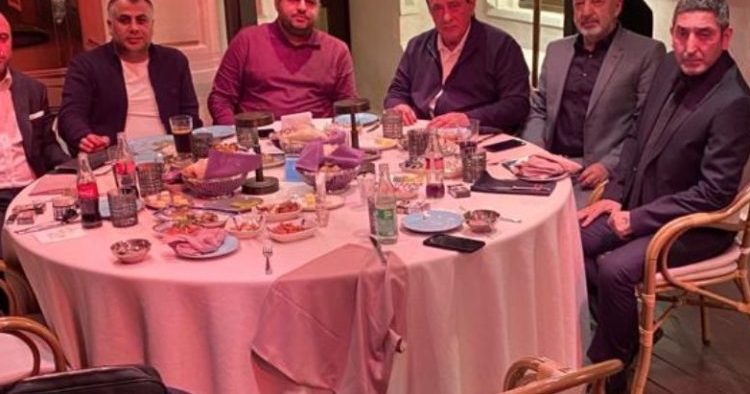 In a changing Turkish media landscape, Alaattin Çakıcı, a far-right-linked notorious gangster and former intelligence services hit man, has become an important figure with links to the new owners of Turkish media outlets.

Çakıcı tweeted a photo of himself enjoying dinner with Necat Gülseven, the new owner of Turkey’s 3N MEDYA Group, at the Four Seasons Istanbul, a luxury hotel on the Bosporus.

According to the Media Ownership Monitor project initiated by Reporters Without Borders (RSF) and other reports, the 3N Medya Group owns TV100, Show Radio, Radio VIVA, Bizim Ev Tv, the Yeni Birlik daily and various magazines. Murat Kelkitlioğlu, a pro-government propagandist, is head of the group and a member of the board.

Çakıcı was released from Sincan Prison in April by an amnesty secured by the Nationalist Movement Party (MHP) and endorsed by President Recep Tayyip Erdoğan. He had been serving sentences for a number of crimes including orchestrating the murder of his ex-wife in 1995.

Çakıcı, now 67, had worked with Turkey’s National Intelligence Organization (MIT) since 1987 in running clandestine operations both in Turkey and abroad before he was detained in France. He served a six-month sentence in Nice before being extradited to Turkey in December 1999 and is now back at the center of politics. He was involved in carrying out murders that remain unsolved on behalf of dark forces nested in the security and intelligence branches of the government.

As the rule of law has effectively been suspended in Turkey in recent years, the Islamist government of President Erdoğan and its nationalist partners have turned to mafia groups to run the country, intimidate opponents and promote a climate of fear. Çakıcı has been busy consolidating various mafia groups on behalf of the government and issuing threats to opposition politicians since his release from prison.

On November 17, Çakıcı threatened Turkey’s main opposition Republican People’s Party (CHP) leader Kemal Kılıçdaroğlu in a handwritten statement released on Twitter. Insulting the politician as an “ignorant informant who serves traitors like a dog,” the mafia leader vowed to punish Kılıçdaroğlu with impalement. He defended MHP chairman Devlet Bahçeli as his respected elder and took offense at Kılıçdaroğlu’s criticism of the MHP leader.

Transformation of the Turkish media has critical implications for the country’s domestic politics, its foreign policy and President Erdoğan’s political agenda. In the last decade the Turkish government has increased state intervention in the media by way of subsidies, regulations for cyber censorship and ownership of media, and unprecedented legal, political and corporate pressure on journalists.

The redistribution of state-seized media assets, political and financial pressure and more recently direct state takeovers of critical media outlets have fostered a change in the ownership structure of the Turkish media sector.

A failed coup on July 15, 2016 allowed President Erdoğan to further consolidate his power over the Turkish media and has become a tool that exacerbated the process of the waning of private ownership and free market competition and the waxing of government intervention. In the aftermath of the attempt, pressure on the free media has peaked, and under state of emergency rules five news agencies, 62 newspapers, 16 television channels, 19 periodicals, 29 publishing houses and 24 radio stations were closed down by government decrees.

In 2020 Turkey was ranked 154th out of 180 countries in the World Press Freedom Index compiled by RSF, which describes Turkey as “the world’s biggest jailer of professional journalists.” According to the Stockholm Center for Freedom’s “Jailed and Wanted Journalists in Turkey” database, 175 journalists are behind bars and 167 are wanted and either in exile or at large.