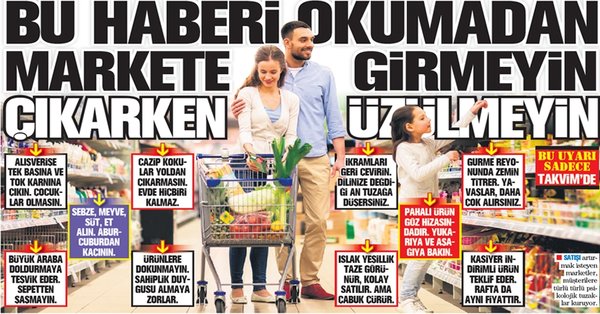 Turkish pro-government newspaper Takvim has published a headline featuring a 10-point grocery shopping list, which advises against shopping while hungry and being accompanied by children, as the country grapples with soaring consumer price inflation.

“Do not go grocery shopping until you read this article,’’ Takvim said in the article published on Saturday, which urged shoppers to use smaller baskets instead of shopping carts.

“Do not touch the items. A sense of ownership forces one into purchasing,’’ the article said, “and make sure there are no children with you.’’

President Recep Tayyip Erdoğan has addressed the hike in food prices, saying the Trade Ministry was working hard to deal with the problem and the authorities would bring the situation under control.

Meanwhile, ministry officials have been carrying out inspections of retailers across the country, imposing fines on businesses that it considers increase prices unfairly.

Takvim’s headline raised eyebrows on Turkish social media, with users accusing the daily of insulting the intelligence of readers.

What can be said about those who publish a headline like this in a country, where people are living below the poverty line?’’ one Twitter user asked.

“Citizens: We are hungry, Takvim: Shop on a full stomach,’’ another user wrote.

“Did you have no shame in reporting on an emotional connection with rice after a 30 second encounter,’’ another user asked.