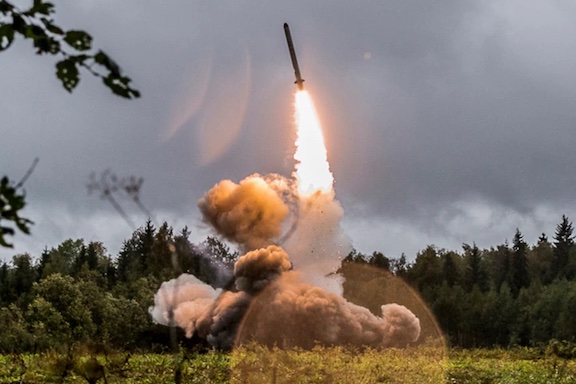 Words have meanings and consequences as Prime Minister Nikol Pashinyan found out when he told a journalist last week that the powerful Russian Iskander missiles, supposedly fired by Armenia during the Artsakh War last November, “did not explode or exploded 10 percent.” This surprising statement was in response to an interview by previous President Serzh Sargsyan in which he asked why Pashinyan had not ordered the use of the Iskander missiles during the early part of the Artsakh War.

Several days after the Prime Minister’s highly controversial statement, his spokeswoman announced that Pashinyan “was not briefed correctly regarding the Russian missiles.” But it was too late. The damage was done.

No one could have predicted the chain of unexpected events that followed Pashinyan’s words questioning the merits of the Iskander missiles that Russia had exported exclusively to Armenia. A large number of Russian military experts and political leaders reacted very harshly to Pashinyan’s statement viewing it as disparaging of the prized missiles of Russia and the prestige of its defense industry.

However, the reaction within Armenia was no less devastating. When First Deputy Chief of the General Staff of the Armed Forces Tiran Khachatryan, a Lieutenant General, was asked to comment on Pashinyan’s statement about the Iskander missiles not exploding, he responded with a chuckle that it was not possible and not serious.

Upon hearing of this slight, Prime Minister Pashinyan immediately ordered the firing of the Deputy General Staff. His dismissal was endorsed by Pres. Armen Sarkissian, according to the process outlined in the constitution. The Prime Minister had surely overreacted to Khachatryan’s snub, particularly since Pashinyan himself had appointed him in June 2020 and awarded him the prestigious “National Hero” medal for his outstanding role during the Artsakh War.

An Iskander missile at a military exercise in St. Petersburg, Russia in 2017 (Russian Defense Ministry photo)

In retaliation, dozens of top Armenian military leaders released a joint statement on Feb. 25, 2021, demanding the resignation of the Prime Minister and his government. The statement was signed by Onik Gasparyan, Chief of the General Staff and 40 other high-ranking military Officers, including 17 generals and Commanders of all five Army Corps. Later, several other military and police officials added their signatures.

The military’s statement expressed its “resolute protest” against the “short-sighted and baseless” dismissal of the First Deputy Chief of the General Staff “without taking into account the national and state interests of the Republic of Armenia, solely based on personal and pretentious sentiments.” The statement added that “in such difficult conditions for the country, such a decision is an anti-state and irresponsible step. The Prime Minister and his government are no longer able to make adequate decisions in this critical and fateful situation for the Armenian people. The Armed Forces, for a long time, patiently tolerated the ‘attacks’ by the incumbent authorities to discredit the Armed Forces, but everything has its limits…. The current authorities’ unproductive governing and the most serious errors exhibited in foreign policy have brought the country to the brink of collapse. Based on the created situation, the Armed Forces demand the resignation of the Prime Minister and the government….”

Pashinyan immediately announced on his Facebook page the firing of the Chief of the General Staff. The Prime Minister called the military’s statement “an attempted military coup,” urging his supporters to gather at the Republic Square where he joined them and marched in Yerevan streets holding a megaphone. This was a highly irresponsible act on the part of Pashinyan, venturing to the streets during what he described as an attempted military coup, which could have led to tragic consequences for the country had anyone harmed him.

In the meantime, the Armenian military took no further steps beyond its call for the resignation of the Prime Minister which the Prime Minister wrongly described as an attempted coup. However, the statement could be viewed as interference in political affairs which violates the constitution. It is clear that the military’s intent is having the Prime Minister resign without taking any military actions.

Turning to the unconstitutionality of the military’s statement, there are counter points to this argument. The military stated that they could no longer remain quiet while the country is on the brink of collapse. The national interest of Armenia has to be of paramount importance. After all, the military is the guardian of the nation’s security. Furthermore, Pashinyan and his supporters cannot all of a sudden claim to be defenders of the constitution, when they have been violating many of its provisions in the past three years. The Prime Minister has repeatedly pressured the courts and has stacked the Constitutional Court with his allies to get verdicts desired by the government. Pashinyan and his supporters similarly pressured Pres. Sarkissian to force him to sign the Prime Minister’s order. Ironically, the democratic principles endorsed by Pashinyan when coming to power have dissipated turning the country into a one-man rule, a dictatorship. Given the Prime Minister’s partisans’ overwhelming majority in Parliament, other voices have been mostly muzzled. All suggestions to form a government of competent experts have been ignored, leaving Pashinyan with a mediocre and incompetent cadre of officials and advisors.
Pashinyan’s only important attribute is that he is not corrupt — which is very positive, but that alone is not enough to lead the state through such turbulent waters. After all, Armenians are not looking for a saint, but a competent leader who can solve the country’s complex problems.
Furthermore, Pashinyan and his followers did not always practice what they are preaching now. Back in 2018, when there were widespread street protests by Pashinyan and his supporters, a large number of Armenian soldiers illegally left their barracks and marched with the demonstrators. Even though this was a violation of military rules and interference in politics, Pashinyan did not take any action against these soldiers. In a similar situation occurred in 1998, when Defense Minister Vazgen Sargsyan forced then President Levon Ter-Petrosian to resign. No one complained that it was unconstitutional.

Shortly after this new crisis in Armenia, leaders in Azerbaijan and Turkey issued self-serving statements on the situation in Armenia. In my opinion, both of these countries, led by dictators, are in no position to comment on developments in Armenia, let alone give Armenians lectures about democracy. They should look at themselves in the mirror and keep their mouths shut.
Having suffered a devastating defeat at the hands of our enemies in the Artsakh War, Armenians cannot afford now to attack each other. We need to place the national interest above all else. Having lost most of Artsakh and thousands of soldiers, let’s not risk losing Armenia itself.

Pashinyan, the leader of the ‘Velvet Revolution,’ should not have told his followers last week that there will be no more ‘velvet’ which could be interpreted as a threat to anyone who disagrees with him. Should the military also adopt a no velvet approach, the outcome would be tragic for the entire Armenian nation. The best solution would be for the Prime Minister, having lost territories and thousands of soldiers, to resign by his own volition without facing any threats or protests. Otherwise, having demanded Pashinyan’s resignation, the military leaders may carry out their demand by force, to ensure that they themselves are not arrested. Such a group arrest would deprive Armenia of its entire military leadership. Months from now, under calmer conditions, new parliamentary elections should take place with a clean slate, hopefully excluding Pashinyan and the other former leaders. The people have the right to decide by a majority vote who their new leader should be.