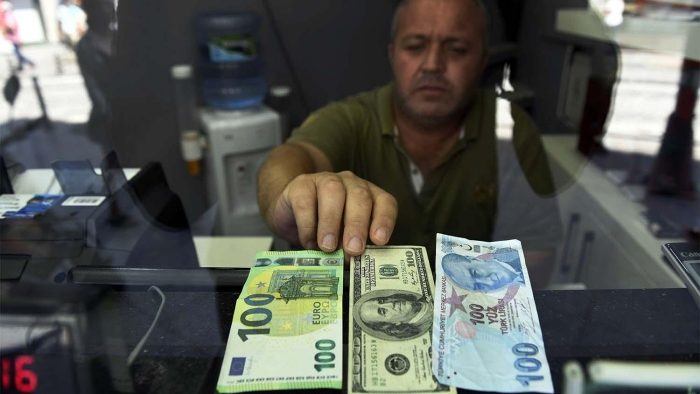 The lira slid by 1.9 percent to 7.67 per dollar, almost doubling losses this year to 4 percent. It was its lowest level since Dec. 21. The MSCI International Emerging Market Currency index dropped 0.4 percent to the weakest in three months.

The Turkish lira had led a rally in emerging markets in the early part of the year, rising more than 7 percent to as strong as 6.89 per dollar by mid-February. But concerns about the global economy and Turkey’s own economic and monetary policy mix have reversed those gains – the currency is trading more than 10 percent lower from its Feb. 16 peak.

Some emerging markets may face an unenviable choice between hiking domestic interest rates or letting their currencies weaken, Neal Shearing, chief economist at Capital Economics in London, said in a report to clients on Monday.

“If bond yields continue to rise, not only will the policy response differ between countries, but so will the extent of the economic pain,” Shearing said.

Some economists have called on the central bank to raise rates again at a meeting of its Monetary Policy Committee (MPC) next week, to help contain inflation and defend the lira.

The bank says that it is committed to meeting a year-end goal of 9.4 percent for consumer price inflation and that annual price increases will start to slow after it tightened monetary policy.

“Seems that central bank now has no choice but to hike again on March 18, and I think they will need to go to 20 percent,” said Tim Ash, senior emerging markets strategist at BlueBay Asset Management in London. “They have to get ahead of the curve. Not hiking at the last two MPCs was a mistake.”

The lira had hit a record low of 8.58 per dollar in early November after the central bank kept interest rates at below inflation to help the government engineer a borrowing boom. That lax monetary policy led to a widening in the current account deficit and concerns among investors for economic stability and the independence of central bank officials.

Turkish President Recep Tayyip Erdoğan, who replaced the central bank’s governor on Nov. 7 with Naci Ağbal, a former finance minister, is expected to announce a package of reforms this week to help stabilise the economy and attract investment.

The government plans to prioritise the measures in a timetable, Dünya newspaper reported on Monday.

Inflation in Turkey and many other emerging market countries is also expected to come under pressure from a rise in global oil prices. Turkey imports nearly all of the energy it consumes.

The Russian ruble fell by 0.5 percent to 74.69 per dollar on Monday. Russia is a net exporter of oil and natural gas.