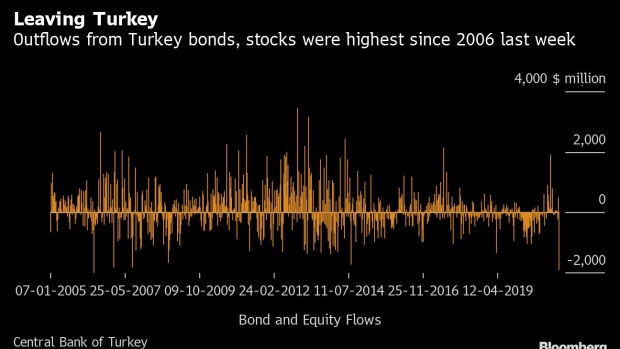 International funds sold $1.9 billion of Turkish government bonds and stocks in the week ending March 26, the biggest outflow since May 2006, according to the latest data released Thursday. The exodus spurred an 11% decline in the lira over the same period, pushing it close to a record low.

Overseas funds had been pouring money into Turkish assets ever since former Governor Naci Agbal started raising borrowing costs in November in an attempt to rein in inflation. For many, Agbal’s dismissal — which came just days after he delivered a larger-than-expected rate increase — was a sign the policy maker would revert to a loose policy setting that had undermined confidence in the nation’s assets for years.

For local households and companies, the selloff was an opportunity to lock in profits. Turkish retail and corporate accounts sold more than $8 billion last week to buy liras, the most since a currency crisis in August 2018, stemming the currency’s decline.

Turkish residents hold $252 billion of foreign-currency deposits, a hedge against runaway consumer prices and bouts of volatility. They had amassed around $15 billion of foreign tender between November and the beginning of the year as the lira rallied.Governor Sahap Kavcioglu has sought to reassure investors by pledging to maintain a tight monetary policy stance. During a presentation to investors on Thursday, he said the bank would consider continuity while evaluating monetary policy, according to person with direct knowledge of the briefing.