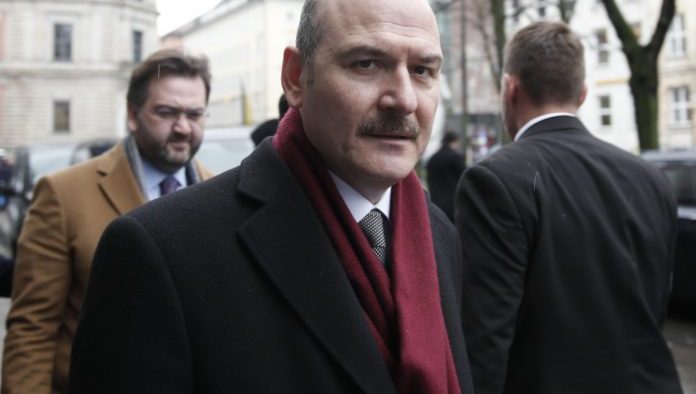 Interior Minister Süleyman Soylu has announced that he will take recent allegations made by notorious Turkish mob boss Sedat Peker, which include providing support for the mafia, to court, while accusing the country’s opposition leaders of giving credence to claims by “mafia dirt.”

“I’m calling on this shameless part of an operation whose brain was destroyed by the drugs he used: I’m taking your allegations and slander to court so that everything will be revealed. I defer to the authorities,” Soylu said on Thursday, calling on Peker, who is believed to be in Dubai, to return to Turkey and turn himself in.

“There are — of course — some places that you derive your courage from,” Soylu continued, listing the names of some of Turkey’s opposition party leaders in the written statement released on Twitter.

“After all, you have an elder brother like Kemal Kılıçdaroğlu. You have an elder sister like Meral Akşener. You have a brother like Ali Babacan. You have a mentor like Ahmet Davutoğlu,” the minister said, referring to the leaders of Turkey’s main opposition Republican People’s Party (CHP), Good (İYİ) Party, Democracy and Progress Party (DEVA) and Future Party (GP), respectively.

Soylu also alleged that Peker has the support of the Birgün, Cumhuriyet and Sözcü dailies in addition to terrorist organizations.

“If you had any contact with me at any point in your life and if it is proven, I agree to any type of punishment, including capital punishment, and humiliation before the eyes of our glorious nation,” the minister challenged in the conclusion of the statement.

Peker, who is believed to have moved to Dubai after Turkey filed a Red Notice request with Interpol, has been making striking revelations about state-mafia relations and drug trafficking and murders implicating state officials in videos he released on Youtube.

He has thus far published four videos, each of which has garnered millions of views, and put forward several claims against Soylu in the last installment released on Thursday, where he sarcastically said, “He [Soylu] said I was a ‘dirty mafia.’ … Today, I’ll tell you about the ‘clean’ Süleyman.”

Peker, a notorious Turkish nationalist, alleged that it was connections to his family that had helped Soylu rise through the ranks of the right-wing True Path Party (DYP) before he joined the ruling Justice and Development Party (AKP) in 2012 at the invitation of Turkish President Recep Tayyip Erdoğan.

Peker also claimed that Soylu helped him avoid police prosecution by notifying him that an investigation was being prepared against him, before he fled Turkey in early 2020. He also said Soylu previously told people that he “liked” Peker.

“What has changed in such a short period of time? Aren’t you the one who gave me police protection and then extended it a year later?” the mafia boss questioned.

Peker further alleged that Soylu’s resignation in April 2020, which prompted a wave of support on social media before Erdoğan quickly announced that the minister would stay in place, was not an abrupt decision but a scenario plotted in advance, with the minister ordering bot account holders and news websites with links to Peker to support him.

Soylu’s attempt to resign due to widespread criticism over a mere two hours’ notice for a 48-hour COVID-19 lockdown that caused chaotic scenes in large cities strengthened his position since he offered to take individual blame — even though the lockdown was approved by Erdoğan — and then won a public endorsement from the president.

Once a staunch supporter of Erdoğan, Peker left Turkey following the publication of a report related to arms trafficking to Syria that was allegedly carried out under the guise of humanitarian aid. Although police recently raided his villa in İstanbul’s Beykoz district as part of an organized crime operation, they failed to detain him since he was out of the country.

Turkish Embassy in Tirana spied on Erdoğan critics, describing them as ‘malignant cells’
NAT 14th May 2021
Submit an Op-Ed
Tweets by NewsAboutTurke1