Can Biden tame the almighty Erdogan?

Can Biden tame the almighty Erdogan? 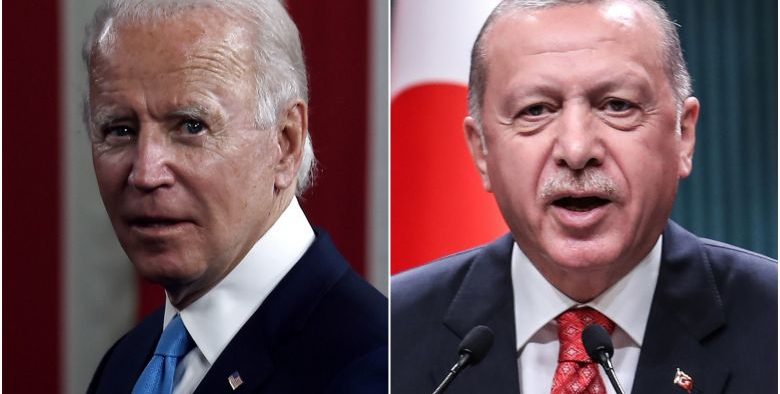 At the hottest temperature of the Cold War, a sociological survey involving Soviet and U.S. housewives revealed something strange, but true. In the same number of words, the Americans said: “Russians are bad people” and the Russians responded: “Americans are bad people.”

was even though the American respondents conceded that  This they had not met any Russian and their Russian counterparts agreed that they had not come into contact with any American. These are the dangers of stereotypes for which the U.S. and Russian governments were responsible or irresponsible, whichever way you look at it.

I remembered this phenomenon when I heard that U.S. President Joe Biden, who had no hurry at all in speaking to a confidant of his predecessor, Turkish President Recep Tayyip Erdogan, was now set to meet him on the sidelines of the Brussels NATO Summit.

Come June 14, 2021, Monday, global eyes and ears will be turned in the direction of the Belgian capital, Brussels. And chances are it won’t be for the NATO Summit but rather the outcome of a sideline meeting between U.S. President Joe Biden and his Turkish counterpart President Recep Tayyip Erdogan.

Relations between U.S. and Turkey significantly went bad after Turkey’s acquisition of S-400 defense missiles from Russia in 2019, resulting in Ankara’s expulsion from the F-35 stealth fighter jet programme and sanctions against its defense industry.

Here are the two Heads of State, though NATO allies, already with their opinions about each other, actually miles apart, telling the world they are ready to mend their countries’ ties. But the U.S. President calls his Turkish counterpart “aristocratic” while the Turkish President calls his U.S. fellow “interventionist”.

Together they want to refurbish the wall between their countries. But they don’t tell us the aggregate ratio of the bond between the “aristocratic” and “interventionist” sides of the U.S.-Turkish relations wall.     Erdogan sees some “positive agenda” with Biden along the lines of some other European leaders. But at the same time he stores at the back of his mind that Biden’s likelihood of raising hell about the acquisition of Russian S-400 air defense missile system would be the stumbling block.

And Biden has no choice here. What would he tell the Congress at home in respect of the Countering America’s Adversaries Through Sanctions Act (CAATSA) which mandates penalties for transactions deemed harmful to the interests of the United States?  How safe is the classified information about the F-35 jet fighters’ development programme in the wake of this?  What would he tell fellow NATO members at the Brussels Summit?

At the same time, Erdogan knows very well that the last thing the U.S. would do is risking losing NATO’s second largest military strength to adversaries, meaning Russia and China. Turkey is also the key to U.S. influence on the Middle East affairs. Turkey is home to a U.S. military base.

Thus when Erdogan advances issues like calling for sincere and respectful approach based on what he calls “common interests and values” be is fully aware of the situation on the ground.  This is why he dares warn that US risked losing a precious friend if Biden tries to corner his country. He also refers talks with Biden “a new era” in relations between the two countries.

It is here that the words of the Global Forecasting Director at the Economics Intelligence Unit, Agathe Demarais, come to the fore. The fact that the U.S. and Europe have become “increasingly frustrated” by Erdogan’s emboldened foreign interventions and “erratic” behavior towards allies and adversaries.

There have been reports suggesting that Biden planned to demand a written commitment from Erdogan. This is a far-fetched idea.  How many international protocols has Turkey signed, including the Istanbul Convention, and from which it has withdrawn with impunity? If Erdogan transgresses provisions of his own country’s constitution, what is difficult about an agreement with Joe Biden?

As of now, Erdogan sells the idea of his commitment to normalization in foreign policy and reforms on the home front. What is he doing on both fronts? Syria. Libya and in the eastern Mediterranean let alone, he is conducting transnational abductions of people deemed opposed to his autocratic rule. The latest of them were in Nairobi, Kenya, East Africa and in Kyrgyzstan’s capital, Bishkek, in Central Asia. He is on the witch hunt of anybody he takes linked with a Turkish Muslim cleric Fethullah Gulen living in U.S. exile. Of all targets, his victims are teachers.

Erdogan, by his own decree, is the chairman of an institution that programmes his country’s MiT secret agents’ abduction operations abroad.  When the President of Kyrgyzstan, Sadyr Japarov, asked him about Orhan Inandi, the latest abduction in Bishkek, he responded that he did not know Inandi, had no knowledge of the matter and did not want to hear anything about FETO supporters.

This must be a big lie. The incident had been covered by 24 media agencies but he never knew anything about it. He forgot that he was the source of the news about the earlier Nairobi kidnap involving the same kind of victim, who is Gulen’s nephew.

If this is the man from whom Biden wants a written commitment, then something must be wrong somewhere. How can you conduct a virginity test on a person in advanced gestation stage? There has got to be some other reasons or complications behind such a move.

These complications have been better explained by Anthony Blinken, U.S. Secretary of State, in his address to the Senate Foreign Relations Committee in response to Senator Robert Menendez’s question about Turkey.  Blinken has confirmed that “Turkey is not behaving the way a NATO ally should.”

Besides the S-400, he says, “the actions in the Eastern Mediterranean are also quite disturbing…”  In his question, Sen. Menendez pointed out that “Turkey is constantly violating international law… such as threatening Cyprus … declaring exclusive economic zone between Turkey and Libya, interfering in Greece’s exclusive economic zone… showing aggression towards Armenia through Azerbaijan …”

Blinken confirms “we have these and (other) overlapping interests with Turkey. We also have concerns about human rights and the treatment of journalists…”

When I was compiling this analysis, a report of The Arrested Lawyers Initiative (ALI) arrived on my desk adding more flesh to what Blinken had to say. “According to our survey there is a steady increase in the use of anti-terrorism law on individuals… official statistics highlight that prosecutors have filed more than 420,000 charges … within the last eight years.

“What is worse, between 2016 and 2020 more than 265 individuals have been sentenced for membership of an armed terrorist organization.” The Council of Europe report says Turkey has the largest population of inmates convicted for terrorism-related offences. Out of 30,524 inmates in CoE countries, 29,827 belong to Turkey.

That is how far Turkey has gone versus its people, NATO and the international laws. Can Biden, with all the intriguing U.S. interests in Turkey tame the almighty Erdogan?