It’s not a revelation; it’s a statement of fact and it ought to be repeated whenever Paris Saint-Germain are discussed: since 2011, PSG have been owned by Qatar Sports Investments (QSI), a subsidiary of the sovereign wealth fund of the state of Qatar.

Without that vital preface, one neglects a significant part of every PSG story, and indeed the entirety of this one.

Bankrolled by one of the richest nations in the world for the past decade, PSG’s transfer activities have altered the playing field in European football beyond recognition, as deals for the likes of Neymar (€222m from Barcelona in 2017) and Kylian Mbappé (€145m from Monaco in 2018) have sent inflationary waves across the transfer market.

It was partly — although certainly not solely — as a consequence of that hyperinflation that Barcelona, one of the world’s most storied clubs, found themselves in a situation where they were unable to prove to the Spanish Football League that they had the funds to retain the services of Lionel Messi.

PSG pounced, snapping the 34-year-old up on a free transfer and once again igniting the debate over football’s finances. 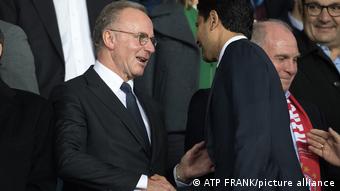 Following the move, ex-Bayern Munich CEO Karl-Heinz Rummenigge was among those who said tougher rules on club wages and player transfers are an “absolute necessity.”

“Financial Fair Play (FFP) already exists, it just needs to be adapted and used more stringently,” he told Germany’s Sport Bild newspaper, referring to the UEFA regulations which stipulate that, in principle, clubs should not spend more than they earn and that only a maximum of €30 million per year may be covered by external investors.

As a result of the pandemic, UEFA has temporarily relaxed the regulations, for example allowing clubs to submit joint financial reports for 2020 and 2021, giving the clubs more wriggle-room. But, in the case of state-owned entities like PSG – and UAE-owned Manchester City – calculating income and identifying the provenance of such funds is not always straight forward.

In February 2020, following revelations in German news magazine Der Spiegel, UEFA barred Abu Dhabi-backed City from the Champions League for breaches of FFP regulations – namely accusing them of artificially inflating the value of sponsorship deals with Abu Dhabi-based companies – and for failure to comply with the governing body’s investigators.

The Manchester club overturned the ban at the Court of Arbitration for Sport later that year, the panel finding that “most of the alleged breaches were either not established or time-barred” – the latter meaning that the alleged offenses had simply taken place too long ago to be relevant.

At Wednesday’s press conference introducing Messi as a Paris Saint-Germain player, PSG president and Qatar Sports Investment chairman Nasser Al-Khelaifi insisted that his club has always complied with FFP. “We have followed the Financial Fair Play regulations from the day we started and will do until the end,” he said.

Indeed, FFP isn’t the immediate issue here. Just like the deals for Gianluigi Donnarumma (from AC Milan), Sergio Ramos (from Real Madrid) and Georginio Wijnaldum (from Liverpool), PSG have technically signed Messi on a free transfer.

They will pay him a reported €25m per year over the course of his two-year contract, plus a €25m signing-on fee, but those costs can be spread over the course of his deal. When compared to the estimated €500m that Manchester City were reportedly calculating last year when assessing the feasibility of a potential Messi transfer, PSG have got themselves a bargain.

“Before we do anything, we check with our commercial people, with our financial people, and with our legal team,” Al-Khelaifi said. “We had the capacity to sign Leo [Messi], we knew that we could sign him.” 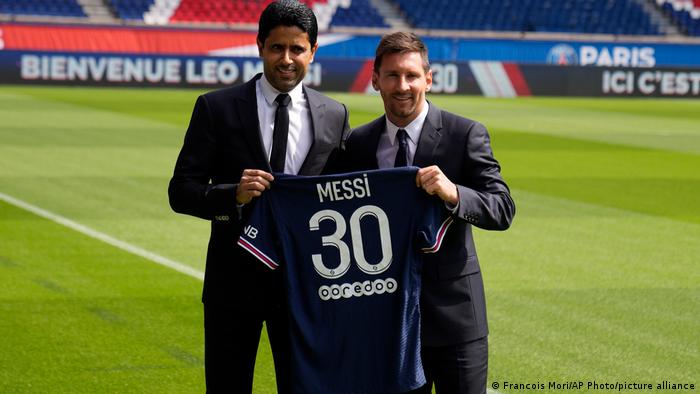 And no wonder he sounded confident. Messi’s arrival in Paris doesn’t just have fans salivating at the prospect of the Argentinian legend lining up alongside Neymar and Mbappé in a front three usually only seen on video games; it also caps off a remarkable few months of footballing diplomacy for Al-Khelaifi personally.

Just four months ago in April 2021, the 47-year-old was under immense pressure from his counterparts at Barcelona, Real Madrid and Juventus to sign up to the proposed European Super League, but steadfastly refused their overtures. When the whole endeavor collapsed in 48 spectacular hours, Al-Khelaifi replaced Juventus chairman Andrea Agnelli as chair of the European Club Association (ECA), which represents the interests of those clubs who regularly compete in European competition.

In short, Al-Khelaifi has emerged as one of the most powerful men in world football and will be heavily involved when UEFA and the ECA discuss any changes to FFP, which Rummenigge and UEFA president Aleksander Ceferin believe are so necessary.

Back home in Qatar, there will be further accolades to come for Al-Khelaifi as the 2022 World Cup edges ever closer, representing the highpoint of the country’s inroads into sports marketing across the globe over the past decade.

For Qatar, it’s a project designed to diversify the nation’s economy, reduce its reliance on oil and earn itself influence among western nations. For critics, it’s “sportswashing” – a process of subtly laundering Qatar’s reputation and covering up extensive human rights abuses, including workers’, women’s and LGBTQ rights.

According to a recent report in British newspaper The Guardian, more than 6,500 migrant workers have died in Qatar since the country won the right to host the 2022 World Cup, with at least 37 directly linked to the construction of stadiums. The Qatari government insists that the death rate is proportionate to the number of migrants in the country and that measures have been taken to improve working conditions.

And with Messi now effectively employed by the state of Qatar, it would be a big surprise were he not to compete in one final World Cup with Argentina, having just won the Copa America for the first time. 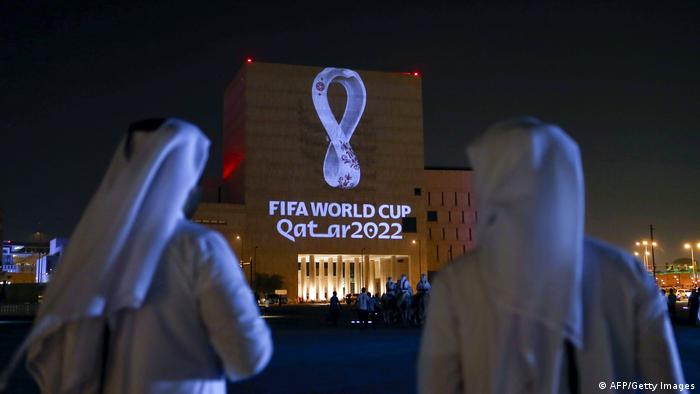 Qatar will host the World Cup in 2022, the culmination of over a decade of involvment in international sport

That would be an added bonus for Qatar in terms of international recognition, with the country still embroiled in a complex regional dispute with its neighbors Saudia Arabia and the United Arab Emirates, a dispute which is also not entirely unrelated to football.

It was only in January 2021 that a Saudi-led coalition reestablished diplomatic ties with Qatar after a four-year economic blockade in retaliation for Qatar’s alleged links to Islamist groups such as the Muslim Brotherhood, which they acknowledge, while denying any links to al-Qaeda or the so-called “Islamic State.”

During the blockade, Al-Khelaifi’s beIN Sports television channels were banned in Saudi Arabia – although their content was still made available via a pirate service known as beoutQ, which Qatar alleges has the official backing of Saudi Arabia. When a Saudi-led consortium attempted to purchase English football club Newcastle United in 2020, Qatari-owned beIN Sports, which owns regional broadcasting rights for the Premier League, wrote to the league to warn against allowing the takeover, which has been blocked, for now.

Saudi Arabia, Qatar and the UAE have all competed to host prominent sporting events, from horse racing to boxing to Formula One. Beyond the Gulf region, Russia has hosted the 2014 Winter Olympics and 2018 World Cup, Azerbaijan has hosted Europa League finals and Euro 2020 games, while China will host the Winter Olympics in February, just 14 years after the Beijing Summer Olympics.

All have dubious records when it comes to human rights, democracy and freedom of speech, but such is the geopolitical context in which Lionel Messi’s move to PSG must inevitably be seen. 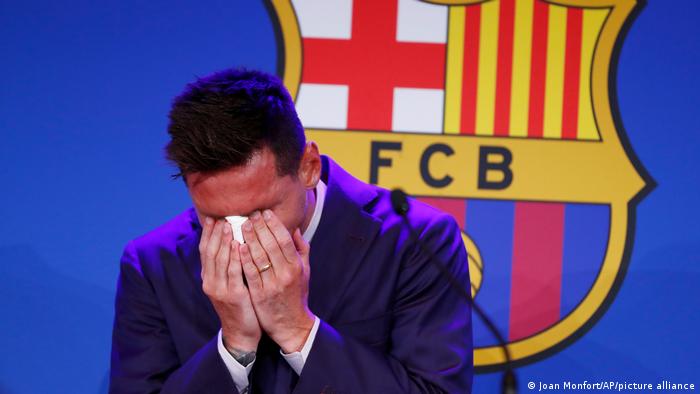 In comparison, the question of the regulation — or not — of football’s transfer market pales into insignificance, but it’s a question which recent events have made all the more pressing.

Of course, the dire financial situation which led to Barcelona’s desperation to sign up to a European Super League and, when that failed, compelled them to release Lionel Messi, cannot solely be blamed on PSG and Qatar; catastrophic mismanagement exacerbated by the pandemic had the Catalans teetering on the brink anyway.

But the hyperinflation of market prices by the purchasing power of state-owned clubs is certainly a factor in forcing clubs like Barcelona to take ever greater risks in an ultimately hopeless attempt to compete.

Indeed, were it not for more astute financial management, Bayern Munich could easily have found themselves in a similar situation, which explains Karl-Heinz Rummenigge’s desire to see some form of regulation.

Not that the German giants are entirely blameless themselves, also benefitting as they do from sponsorship deals with Qatar. State airline Qatar Airways adorns the sleeves of Bayern’s jerseys, while the team has been traveling to Doha for annual warm-weather winter training camps since 2011. Bayern do, however, remain majority member-owned, as per German Football League (DFL) regulations, and some of those members continue to be vocal critics of their club’s dealings with Qatar.

Now, after Manchester City’s successful CAS appeal exposed the limitations of UEFA’s current FFP regulations, after the aborted attempt to form a breakaway Super League, and after PSG snapped up arguably the world’s greatest ever footballer, where will football go next?

Rummenigge may have handed over the reins at Bayern to Oliver Kahn this summer but he remains on the UEFA ExCo as a representative of the ECA, now fronted by Al-Khelaifi. The two men will play an influential role in determining the future of European football’s financial regulations, or lack of, but both have very different interests.

On Friday, Bayern will kick off the new Bundesliga season with a young, inexperienced coach and a squad substantially weaker than that which won the Champions League in 2020, when they beat PSG in the final.

PSG, meanwhile, will feel they can finally go that one step further and win the biggest prize: not just the title of European champions for the team nominally from Paris, but the ultimate geopolitical coup for the state of Qatar, with Lionel Messi lifting the trophy. 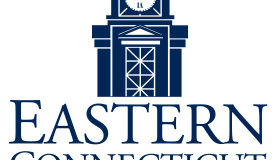