Who are the Taliban 2.0? Afghanistan’s new status quo

Who are the Taliban 2.0? Afghanistan’s new status quo 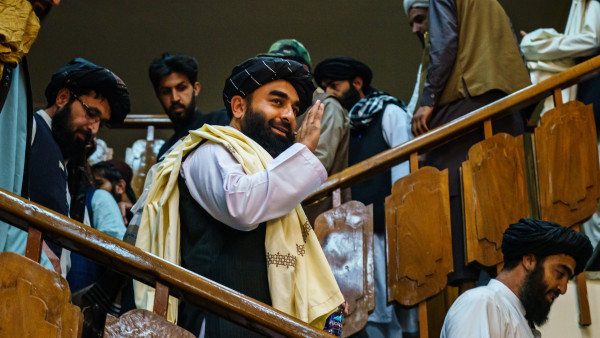 In-depth: The New Arab speaks with Haroun Rahimi, a law professor at the American University of Afghanistan, who offers his expert analysis on the new status quo.

As Afghanistan enters its third day as the Taliban’s so-called “Islamic Emirate”, global media attention is fixed on how the militants are ruling.

Gracing live TV and dominating social media, the Taliban of 2021 are showing that they are radically different from their extremist predecessors, which emerged out of Pakistani “madrassas” (Islamic schools) in the 1990s and seized power until the US invasion in 2001.

While the group has used propaganda channels from the start, including via radio and online media, during their offensive that began after US President Joe Biden declared the withdrawal of all US troops from Afghanistan, their digital campaign has been carefully and efficiently managed.

“As Afghanistan enters its third day as the Taliban’s so-called ‘Islamic Emirate’, global media attention is fixed on how the militants are ruling”

With a Whatsapp complaints commission and a purported commitment to a free press that steers clear of “character assassinations”, the Taliban’s PR has entered a new chapter – a far cry, for now at least, from the days of public stonings in football stadiums.

The New Arab interviews Haroun Rahimi, a law professor at the American University of Afghanistan, who offers his expert analysis on the new status quo.

“The Taliban’s PR campaign did not start today,” Rahimi tells The New Arab. The group are known to have successfully engaged with people’s policy queries on a range of social media platforms, chiefly Twitter, where there are electronic armies of pro-Taliban accounts and followers of the group’s commanders, ideologues and spokesmen.

This is where the Taliban generated traction and where the government failed, according to Rahimi.

“They were better at responding to the queries and questions of journalists, academics and analysts. If you reached them on Twitter, Whatsapp, Clubhouse, you’d get a response instantly. And they wouldn’t offer simple answers, they would come back with data and explanation,” Rahimi says

The government’s ability to shape the war narrative was fraught by its media apparatus – a centralised process manned by a very small group that was slow to interact with observers.

But if the Taliban appeared to have the upper hand in the academic sphere, their PR campaign was most effective when it played out on the battlefield.

“Through their media channels, the Taliban conducted effective outreach. They reached out to government forces and the local elite, offering them amnesty and the chance to switch sides,” Rahimi said.

While the Taliban are alleged to have committed serious human rights abuses in rural Afghanistan – including the summary execution of soldiers, pro-government militia and civilians – reprisal attacks by Taliban fighters were neither publicised nor acknowledged by the group’s leadership.

“When they captured (Ismail Khan), they put him in front of the camera. Obviously, they were making him talk, probably at gunpoint, so he was coerced to say nice things about the Taliban. But Mullah Amir Khan Muttaqi (a senior Taliban leader) appeared to trust him so much he offered him the chance to go to Kabul and mediate a surrender among the leadership of the Jamiat-e-Islami, whose ranks include ethnic Tajik militia commander Atta Mohammed Noor,” said Rahimi.Instead, the Taliban made a concerted effort to emphasise that their fighters were treating enemy captives “mercifully”. Most notable is their treatment of Ismail Khan, a Soviet-era commander who led a fierce anti-Taliban uprising in Herat.

The professor, a native of Herat, said his local Twitter feeds showed him that that the Taliban’s much-publicised interaction with the veteran commander was “not lost on Heratis” and that it may work to the group’s popularity in the overwhelmingly anti-Taliban city.

“Ordinary Afghans are all too aware of the Taliban’s doublespeak”

A war tactic or a governance strategy?

Reflecting more broadly the Taliban’s communications activities, Rahimi says that it’s unclear whether it constitutes the group’s war tactic – their modus operandi when they are vulnerable and trying to consolidate power and international legitimacy – or the early signs of a governance strategy of inclusiveness and tolerance.

Ordinary Afghans are all too aware of the Taliban’s doublespeak. In the mid 90s, the group maintained that they did not seek a government but wanted to dismantle warring militias and restore law and order. They were welcomed by the then de-facto leader of the mujahideen, Burhanuddin Rabbani, but took over and instituted a brutal authoritarian regime.

More than two decades later, Afghans of a latter generation bore witness to how the Taliban engaged in peace negotiations with the government while conducting relentless military campaigns and the targeted assassinations of critics, journalists, and human rights defenders.

“The international community has a short attention span but Afghans have perspective. The credibility of a revamped Taliban, a Taliban 2.0, is affected by context,” Rahimi says.

Searching questions over the Taliban’s ability to effectively govern emerge from the reality that it is an insurgent group with very little experience of running an effective government or providing services.

“In the areas under their control, it was the government that was running schools and paying public servants. This is why the Taliban are afraid of the disruption of public services in Kabul, it is why they are telling government workers to return to key institutions and keep the state intact,” Rahimi says.

As the group is unlikely to have any technocrats to whom they can offer government portfolios, the insurgency-cum-government may be supported by doctors, lawyers and engineers whose views align with the group.

If remaining figures of the old guard – so far a negotiation trio composed of chief Afghan government negotiator Abdullah Abdullah, ex-president Hamid Karzai and Hizb-e-Islamic leader Gulbuddin Hekmatyar – feature in any future government, they will serve little purpose other than rubber-stamps for the group’s legitimacy, Rahimi says.

“Success in an insurgency does not equal success in a government”.

By: Kamal Afzali – a journalist at The New Arab.