Friends of Iran are now in power in Kabul

Friends of Iran are now in power in Kabul 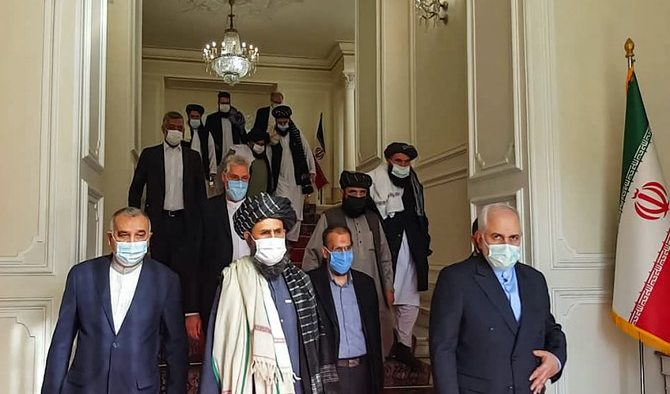 The Taliban have seized power in Afghanistan, causing many countries — including the UK, Italy, Spain, Denmark, Sweden, Norway, Denmark and Finland — to evacuate their citizens and shut their embassies in Kabul. Iran, however, has kept its embassy open. Iranian Foreign Ministry spokesman Saeed Khatibzadeh, quoted by official news agency IRNA, stated: “The embassy of the Islamic Republic of Iran in Kabul is fully open and active. Iran’s consulate general in Herat is also open and active.”

It is critical to closely examine the Iranian regime’s ties with the Taliban, as their relationship will have important implications for the region.

While some scholars, politicians and policy analysts argue that the Taliban and the Iranian government are natural foes because one is Shiite and the other Sunni, such an observation is extremely simplistic and a misconception. The Iranian regime will ally itself with any group, regardless of its religious orientation, as long as it shares interests with Tehran’s ideological and revolutionary principles. Some examples include Iran’s strong alliances with Venezuela, North Korea, Hamas and Al-Qaeda.

One of the key shared interests between the Taliban and the Islamic Republic is their robust opposition to the US. This is why the Iranian leaders cheered America’s withdrawal from Afghanistan. They see this development as a blow to Washington and a manifestation of its foreign policy failure in the region.

Before the Taliban’s takeover, Ali Shamkhani, the secretary of Iran’s Supreme National Security Council, tweeted in January: “In today’s meeting with the Taliban political delegation, I found that the leaders of this group are determined to fight the United States.”  This infuriated the Afghan government and surprised many because President Ashraf Ghani was still in power. Yasin Zia, chief of the general staff of the Afghanistan National Army, responded by tweeting: “Unfortunately, your understanding (Shamkhani) of the ongoing war in Afghanistan is inaccurate. The Taliban is not fighting against the US, but against the people of Afghanistan. We will act decisively against any group which is the enemy of the people of Afghanistan.”

It is also worth noting that Iran has long provided shelter to Taliban leaders, who have been traveling there since 1996. Foreign Policy magazine reported in 2016 that Taliban chief Mullah Akhtar Mansour “was killed in Pakistan by an American drone… after leaving Iran, where his family lives. US officials say that Mullah Mansour regularly and freely traveled into and out of Iran.”

In addition, the Iranian regime has long been providing the Taliban with cash and weapons. Rahmatullah Nabil, the former head of Afghanistan’s National Directorate of Security, in 2017 accused Iran of providing the Taliban with arms and financial aid. And two unnamed Western officials told Foreign Policy magazine in 2016 that the Iranian government was “providing Taliban forces along its border with money and small amounts of relatively low-grade weaponry like machine guns, ammunition, and rocket-propelled grenades.”

While the Iranian regime used to keep its ties with the Taliban a secret, it has now changed its policy and is publicly supporting the group. For instance, Kayhan, a newspaper that is funded by the Office of Supreme Leader of Iran and is considered a mouthpiece of Ali Khamenei, has been attempting to paint a positive picture of the Taliban. It wrote: “The Taliban today is different from the Taliban that used to behead people.”

The Iranian regime has long been providing the Taliban with cash and weapons.

However, former Iranian diplomat Ali Khorram warned the regime: “Thinking that the Taliban will come under Tehran’s command is tantamount to growing a snake up your sleeve. As far as Iran’s national interests are concerned, the liberal government of Ashraf Ghani is a hundred times better than a radical (Daesh)-Taliban government. You were deceived by Russia and Israel in Syria. Take care not to fall in a bigger trap laid out in Afghanistan for you by the West, Israel, Turkey and other regional players.”

Before the US confirmed its withdrawal from Afghanistan, a Taliban delegation met publicly with senior Iranian officials, including former Foreign Minister Javad Zarif. During their January meeting, they reportedly talked about “relations between both countries, the situation of the Afghan migrants in Iran, and the current political and security situation of Afghanistan and the region.”

It appears that the Iranian regime had been preparing for a Taliban takeover of Afghanistan, as Zarif pointed out following this meeting that “political decisions cannot be made in a vacuum and an inclusive government must be formed in a participatory process and needs to consider all fundamental structures, institutions and laws, such as the constitution.”

Finally, the Iranian regime’s close ties with Al-Qaeda show that Tehran is not opposed to the Taliban harboring terrorist groups, as long as their targets are the US and Iran’s other rivals.

Tehran sees itself as a winner as a result of the Taliban’s takeover of the Afghanistan government because Iran-Taliban ties are formidable.