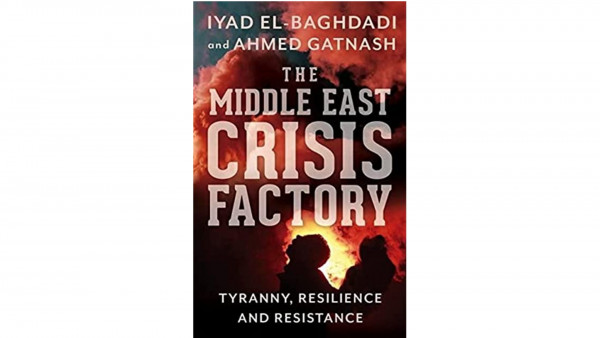 Tracing the formation of the contemporary Middle East from its turbulent past, ‘The Middle East Crisis Factory’ is an invaluable text for readers wishing to understand why, from antiquity onwards, the Middle East matters.

‘Why is the Middle East so messed up, and how can it be fixed? The problem starts with the question itself. Human societies are living breathing things; you don’t fix living things, you heal them.’

This passage from the book captures the essence of this refreshingly bold and visionary analysis of the challenges facing 500 million residents of the MENA region.

The Middle East Crisis Factory, written by two prominent activists, punctures a number of myths about the region and offers cogent explanations of why and how this part of the world became reduced to simplistic tropes that talk about “ancient animosities between Muslims and Jews,” “blood feuds between Sunnis and Shias” and the inevitability of authoritarian government.

“Those sincerely interesting in ‘achieving peace in the Middle East’, need to support the development of strong civil society actors in these nations and encourage the positive intergenerational change that may take another 30 years”

The authors also argue that addressing the problems in the Middle East involves unlearning false choices such as “the region is not ready for democracy” and “the only offer available is either dictatorship and theocracy.”

This study systematically dismantles such stereotypes by surveying the historical origins of the political order in the region and points out that between the eighth and thirteenth centuries, Middle Eastern societies were among the world’s most scientifically advanced and produced polymaths that generated world-changing innovations in engineering, arts, culture and philosophy that laid the foundations for the renaissance.

The authors note that widespread political destabilisation occurred in the aftermath of the Mongol invasions and Black Plague in the fourteenth century and argue that the region never fully recovered from these traumatic episodes’ despite incorporation into the remarkably resilient Ottoman Empire.

The eventual decline of the Ottoman Empire in the face of rising European power in the nineteenth century and eventual dismemberment after the First World War led to the creation of most of the nation-states recognisable today.

The colonial encounter left a deeply negative imprint on the region’s political order and psyche resulting in the internalisation of narratives about the superiority of Western civilisation and its systems of education and governance.

El-Baghdadi and Gatnash suggest that the late colonial period in the first half of the twentieth century correlates with a decades-long soul searching among intellectuals and activists who struggled to respond to the morass of challenges left after the departure of foreign rule.

The postcolonial era also saw the emergence of many corrupt native elites that would continue a political dependency relationship with Western power. The various crises afflicting the region in the modern period are contextualised with the complicated legacies of empire, the creation of the of Israel and the long shadow of the Cold War, War on Terror” and aftermath of the Arab Spring.

These extremely messy realities bring us to the last sixty or so years of what the authors call the vicious triangle of tyrants, terrorists and foreign intervention, and show how these systems of oppression are interrelated and rely upon one another.

The authors use the case of the Assad regime to remind us that he allowed  Al-Qaeda fighters to cross into Iraq and strategically released ISIS members from jail to create chaos to further his desire to stay in power. El-Baghdadi and Gatnash argue that ‘It’s about time we realised that dictatorships are not responsible global partners and, if given space, will only create more instability…whatever appears as ‘stability’ under a dictatorship is a facade, and even the most formidable dictatorships are always just a few steps away from crisis.’

The authors, not only provide a compelling analysis of what went wrong but also offer ideas for what can be done to shape better futures. As first-hand witnesses, they chart the region’s demographic, economic and social trends, and consider the legacy of the Arab Spring and assess the impact of the subsequent counter-revolution and extreme hardships inflicted on the populations of Syria, Iraq and Yemen.

They contend that there are alternative routes to developing stable democracies but, that this would require shaping constructive counter-narratives that shifts the conversation toward building a sense of sustainable peace.

These are of course very difficult live issues as many of these nations are undergoing severe challenges and face uncertain futures. The hopes from Arab Spring are not extinguished as people continue to fight for their rights as demonstrated in Sudan in 2018 and Iraq and Lebanon in 2019. A particularly interesting section of the book is El-Baghdadi and Gatnash’s views on Western foreign policy and the question of intervention.

Rethinking a number of policy problems, they present ambitious and pragmatic ideas that reject both aggressive military intervention and cynical deals with dictators. Indeed, Western governments have good self-interests reasons to reverse their historical foreign policy positions – which created refugees’ flows to the West, caused social tensions and resulted in unexpected political consequences. Prevention is obviously better than cure,

The book ends with a warning and impassioned call to action.  The authors predict that unless dramatic changes take place, the next twenty years are likely to be a painful continuation of political stagnation, authoritarian consolidation, uprisings, civil wars, terror waves, interrupted transitions and successful and unsuccessful revolutions.

“The book is an essential, accessible read for anyone interested in how events in Middle East have global repercussions”

In the longer view of history, it’s important to be reminded that the road to peaceful European democracies took many decades, two World Wars and millions of deaths before the continent arrived at a peaceful settlement. And even then, it is currently going through volatile periods with the mainstreaming of Far-right sentiment, populism and election of authoritarian politicians.

Those sincerely interesting in ‘achieving peace in the Middle East’, need to support the development of strong civil society actors in these nations and encourage the positive intergenerational change that may take another 30 years. People living in free societies should push their governments to put human rights at the top of their foreign-policy agendas.

As El-Baghdadi and Gatnash remark ‘…we cannot solve this problem by empowering the very actors who created it. We cannot keep doing the same thing over and over and expect different outcomes. Authoritarian conditions persist in the MENA region, the same cycle repeating itself well into the future.’

The book is an essential, accessible read for anyone interested in how events in the Middle East have global repercussions and provides persuasive strategies to correct its current course.

Dr Sadek Hamid is an academic who has written widely about British Muslims. He is the author of  Sufis, Salafis and Islamists: The Contested Ground of British Islamic Activism.

An Alternative History of Islam