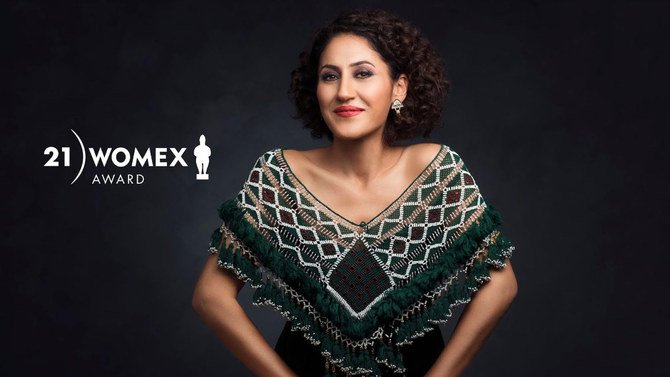 A Kurdish singer-songwriter has won a prestigious international award for maintaining the “highest artistic integrity in the face of political pressure.”

Aynur Dogan received the WOMEX 21 Artist Award, which was introduced in 1999 to acknowledge the social and political importance of musical excellence at an international level. The prize also recognized Dogan’s “long-term dedication to the preservation and innovation” of Kurdish and Alevi culture.

The 46-year-old artist said she was honored that her “years-long efforts on this rocky path” was accepted and welcomed internationally.

“I know that it is hard to make it acknowledged (get acknowledgement for) a traditional music that is not familiar to everybody,” Dogan told Arab News. “It is also very challenging to make it with a language that is not recognized widely.”

She was born in the southeast Turkish province of Dersim (Tunceli) and left home in 1992 for Istanbul, where she was able to establish contact with the music world, attend music classes and learn to play instruments.

She released her first album in 2002 with Kurdish songs — a significant taboo at the time — and faced restrictions and bans on her songs and concert appearances.

A court banned her 2004 album “Kece Kurdan,” alleging its lyrics had inspired separatism. The ruling was later annulled.

One of her concerts during the Istanbul Jazz Festival in 2010 was interrupted by audience members who booed her for singing in Kurdish, causing her to leave the gig.

But the restrictions were gradually lifted over the years, and her melancholic music and rich voice became popular among a wide Turkish audience.

She has become a cultural symbol for the Kurdish community, releasing several albums that focus on its folk music and oral traditions.

“This prize reminded me that I’m not alone and I have a point in promoting music in my mother tongue,” she said. “It also inspired a positive message to the community I belong to. Their happiness, their pride makes me so happy. I used my music as an instrument to overcome the challenges I face. My previous experience showed me that your determination and your self-awareness help yourself in breaking the national boundaries and making your music globally accepted.”

She has collaborated with several artists and groups, including Yo-Yo Ma and the Silk Road Ensemble.

“To hear Aynur’s voice is to hear the transformation of all the layers of human joy and suffering into one sound,” the famous cellist said when speaking about Dogan. “It reaches so deep into our soul, tears into our hearts, and then we are for one moment, joined as one. It is unforgettable.”

Music critic Naim Dilmener said that Dogan’s musical style was one of the strongest examples of world music being performed beyond mainstream languages.

“She performs in Kurdish and she is doing it in the best way,” he told Arab News, praising her “great interpersonal communication (skills) and social network” that had given her a broad audience on an international scale.

She was able to sing at the most famous musical festivals around the world and had “plentiful” followers, he added.

Dogan performs more often in Europe than in Turkey, with concerts planned for the coming months in Germany, the UK and Netherlands.

She was awarded the Master of Mediterranean Music Award in 2017 from the Berklee College of Music in Boston, in the category of Mediterranean Women in Action, for her efforts to promote Kurdish folk oral traditions and blend it with modern Western styles.

“Another characteristic of Aynur Dogan is her ability to move us to tears in each of her songs. I don’t know how she can do it, but I think it is because of her superhuman skills,” Dilmener said.

She has also used her success to build her audience and connect the younger generation with the roots of Kurdish music.

Turkish people mostly know Dogan for her cameo in the blockbuster movie “Gonul Yarası” (Heartbreak). She sang “Dar Hejiroke” (Fig Tree of the Mountain) and made the movie’s main character cry with the lyrics and her rich voice.

Her latest album “Hedur / Solace Of Time” has eight songs and was released in Feb. 2020.

She will be on a European tour in the coming months to promote the album, and will receive the WOMEX award on Oct. 31 in Porto.