Will Turkey ditch Muslim Brotherhood to mend ties with Egypt and UAE?

Will Turkey ditch Muslim Brotherhood to mend ties with Egypt and UAE?

After eight years of hostility, Turkey is engaged in intensive diplomacy with Egypt, the United Arab Emirates, and Saudi Arabia, publicly expressing interest in mending ties with these influential Arab states.

While Turkey aims to put an end to its regional isolation and improve its economy, the Arab Sunni trio eyes solutions in Libya and Syria, as well as an end to Turkish incitement and support for the Muslim Brotherhood. Is compromise possible and how will it influence existing regional alliances?

The relations between Turkey and the Arab countries grew sour during the Arab Spring turmoil when Ankara aligned itself with Muslim Brotherhood movements all across the Middle East. The Muslim Brotherhood seemed victorious back then, celebrating its rise to power in both Tunisia and Egypt.

By 2013, however, everything changed. Another revolutionary wave, as well as army involvement, had removed Muslim Brotherhood Egyptian President Mohamed Morsi and soon relations between Cairo and Ankara were halted and ambassadors called back home. Egyptians, as well as their Emirati and Saudi allies, were wary of Turkish and Qatari involvement in Egypt’s internal affairs, while Ankara declined to recognize President el-Sisi’s legitimacy and used various forms of mass media to insult and incite against him.

This rift, however, was much more than a personal vendetta; it was a battle of ideologies. Turkey and Qatar had aligned themselves with the Muslim Brotherhood and its offshoots, and Ankara turned into a safe haven for thousands of exiled Muslim Brotherhood members, while Egypt and the Gulf states – Saudi Arabia, the UAE, and Bahrain – waged a fight against forms of political Islam and religious extremism.

The rift was deep and deemed irreconcilable, as Egypt and the UAE grew closer to Greece and Cyprus, forming the so-called Hellenic alliance, holding joint military drills, and expanding cooperation in the energy field. Israel also nurtured its relations with both Greece and Cyprus and with Arab countries.

“Ankara is worried about the Hellenic alliance, it’s wary about Greece performing military drills with Emiratis and Saudis and it needs to revive investments in the Turkish economy from these countries. This is the background to what is happening today. Basically, Turkey would like to sabotage the Hellenic alliance and to stop it from growing,” he said.

Ofir also sees a connection between US elections results and changing regional dynamics, and underlines the tactical nature of the new Turkish approach: “Erdoğan seems to be wary of [President Joe] Biden and his new policies toward Turkey. That’s what pushes him closer to Egypt and other Arab countries,” he said.

In December 2020, Egypt, Saudi, the UAE, Bahrain, and Qatar signed the AlUla agreement that ended the Arab blockade of Qatar. This reconciliation apparently paved the way for a gradual rapprochement between the Arab states and Turkey, as Qatar offered to facilitate ties between the two sides.

And what’s behind Egypt’s agreement to engage in a dialogue with Ankara?

Haisam Hassanein, a policy analyst and a former Glazer Fellow at the Washington Institute for Near East Policy, believes Cairo is eyeing two important goals: “Egypt seeks the withdrawal of Turkish forces and allied foreign militiamen from Libya.

“This will allow an internationally backed political process to proceed to end the country’s decades-old civil war. Also, Egypt wants the extradition of 15 members of the Muslim Brotherhood who are wanted in Egypt in connection with terror attacks after Morsi’s 2013 removal,” Hassanein told The Media Line. 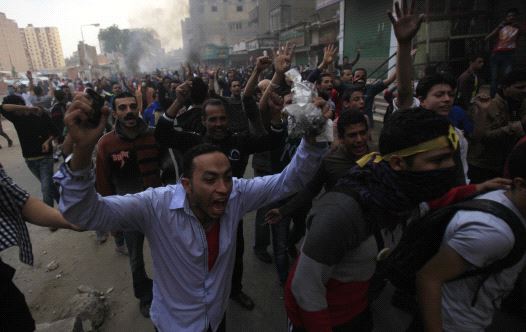 Supporters of the Muslim Brotherhood and ousted Egyptian President Mohamed Mursi shout slogans in front of riot police and army and their supporters, during clashes at El-Talbyia near Giza square, south of Cairo, November 29, 2013 (credit: REUTERS)

Soon after the second round of Egyptian-Turkish talks in Ankara concluded on September 8, Egyptian Prime Minister Mostafa Madbouly said that despite the progress, “there are some outstanding issues between the two countries,” indicating that if these issues are resolved, the countries could restore their relations by the end of this year.

According to Madbouly, the Libyan file remains the key issue for Egypt. “No country should physically intervene in Libya,” he told journalists in Cairo.

The Turkish foreign minister, Mevlüt Çavuşoğlu, responded by defending his country’s military role in Libya in the local media. “Turkey’s presence in Libya, Syria, and Azerbaijan has redefined political equations and results,” he said.

In the spring, Çavuşoğlu mentioned that his country was ready to sign a deal with Egypt over maritime boundaries in the Eastern Mediterranean, and since then the two sides have been carefully looking for de-escalation.

There is also little doubt that Turkey will remain a staunch supporter of political Islamic movements in the region, even if it tactically dims its involvement, Ofir said.

“They partially muted some anti-Egyptian incitement on Turkish-sponsored channels and closed a few Muslim Brotherhood centers in the countries. However, there are thousands of Muslim Brotherhood exiles who reside in Turkey and carry out their activities from there. This support has an ideological nature,” he said.

Ten years after the spark of the Arab Spring, Turkey-friendly Islamist parties are failing all across the region, being removed from power in Tunisia, losing elections in Morocco, and being unable to recover in Egypt.

According to Hassanein, over the past couple of years, Ankara gradually became convinced that this fragmented Muslim Brotherhood opposition-in-exile was “a losing horse that could no longer be used to intimidate the Egyptian president.” He expects Turkey to no longer allow inflammatory discourse against Egypt, which might result in the departure of some Muslim Brotherhood figures for other destinations, such as Qatar.

While it’s still unclear how far Turkey will go in dimming its support for the Muslim Brotherhood, it is obviously interested in increasing Saudi and Emirati investment in its economy.

Not only the Turkish, but also the Saudi, Emirati, and Egyptian economies have shrunk since the beginning of the pandemic, and all are looking for ways to speed the recovery. Abu Dhabi conglomerate International Holding recently announced that it was seeking investment opportunities in Turkey in sectors including health care, industrial and food processing, and Erdoğan said he was expecting “serious Emirati investment” soon.

For now, it seems that while all sides are ready for gradual de-escalation in order to benefit economically, but that just as in the case with Qatar, the wariness will remain when the ties will grow warmer. The central issues of dispute, Turkey’s support of the Muslim Brotherhood as well as its military presence in Libya and Syria, will still prove hard to resolve.

At the same time, the rapprochement might also affect the future of the Hellenic alliance and the slow development of the East Med natural pipeline designed to deliver natural gas to Europe.

During the last few months, Turkey has signaled that it is also interested in mending ties with Israel, especially in the sphere of energy. The gaps between Ankara and Jerusalem are still significant, and it remains to be seen whether the current geopolitical developments will also incorporate Turkey-Israel relations in the future.