Turkey-EU relations in the post-Merkel era

Turkey-EU relations in the post-Merkel era 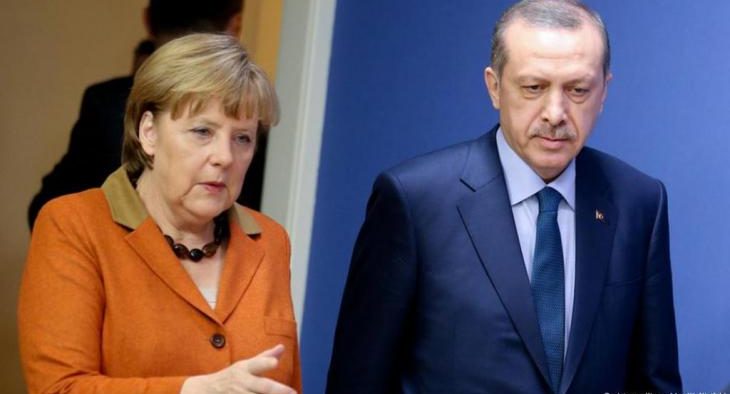 German Chancellor Angela Merkel played a crucial role in the shaping of Turkey-EU relations. Every single detail was not worked out by her, but her fingerprint has been visible in most crucial turning points. When Turkey’s ruling Justice and Development Party, in its early years in power, was genuinely doing its best toward Turkey’s EU accession, Merkel coined a new concept in this process. She said that Turkey should not be admitted to the EU as a full-fledged member, but should enjoy the status of a “privileged partnership.” Nobody offered a clear-cut definition for this concept. Furthermore, there was not in the EU a status called “privileged partnership.” So this concept permanently hung in the air without a proper definition.

Merkel thought Turkey was too big to be absorbed by the EU and that it belonged to another culture, the Islamic world. Turkey’s population amounted at that time to 80 million while Germany’s was 81 million. It was clear that in light of its growth rate, Turkey’s population was going to exceed that of Germany in a few years’ time. This would mean that Turkey was going to have the highest number of seats in the European Parliament. Furthermore, the free movement of labor within the EU would facilitate a further increase of Turkish citizens in Germany, where they already constituted the highest percentage of foreign labor.

After the accession in 2005 of the Greek Cypriots to the EU and French President Nicolas Sarkozy’s policy of obstructing Turkey’s accession process for futile reasons, Merkel’s privileged partnership formula was pushed to the second rank. Without appearing in the forefront, Merkel remained steadfast in her position.

On the other hand, she demonstrated her statesmanship when Germany assumed the sessional chairmanship of the EU in 2007. She said that Germany remained steadfast in its position of supporting the privileged partnership for Turkey, but the “pacta sunt servanda” (“agreements must be kept”) rule required that accession negotiations with Turkey should continue. In other words, she put her role as the sessional chairman of the EU council before her title as German chancellor. Few leaders would accurately distinguish between these two roles.

The only area that is alive in Turkey-EU relations is the issue of Syrian and Afghan refugees, and these issues have nothing to do directly with the accession process.

Now that Merkel’s time is almost over, there is a new situation. Turkey’s EU accession process has already been stalled for the foreseeable future, if not for ever. Turkish president Recep Tayyip Erdogan and foreign minister Mevlut Cavusoglu mention from time to time that Turkey is committed to the accession process, but actions taken by the government on various EU-related issues prove the contrary. The backsliding in democracy and fundamental rights and freedom of expression are the most visible areas in this regard. The economy is shattered. The judiciary is in a deplorable situation.

Turkey has blatantly refused to implement binding verdicts of the European Court of Human Rights. It ranks as 117th in the World Justice Project index of 2021 among 139 countries.

The only area that is alive in Turkey-EU relations is the issue of Syrian and Afghan refugees, and these issues have nothing to do directly with the accession process.

We do not yet know what type of a coalition government will emerge in Germany. The German Socialist Party is likely to be the leading coalition partner in the future German government. Before the Merkel era, the SPD was one of the strongest supporters of Turkey’ s EU accession. Even if the SPD becomes the leader of the coalition, this would mean little for the revitalization of Turkey’s EU accession process because the circumstances are now different.

Merkel used to play a moderating role in Turkey’s conflict with Greece and the Greek Cypriots. We do not know whether the new German government will be eager to assume a similar role.

Apart from Turkey-EU relations, Germany will continue to be an important partner for Ankara. In such intensive relations there will be close cooperation in areas of common interests, and frequent disagreements as well.

Eighteen Turkish-origin Germans were elected as members of federal parliament (Bundestag) in the last elections. There are plenty of Turkish origin politicians in the provincial parliaments and municipal councils so they assume important jobs in the social and political life of the country. This makes another bond between Turkey and Germany.

During Merkel’s one-day farewell visit to Turkey, both the chancellor and president Erdogan underlined these bonds. But they also underlined their disagreements. This pattern of relations will probably continue in the post-Merkel era.

Germany’s opposition parties frequently criticized CDU-CSU policy for not having raised frequently enough the democratic deficiency and lack of human rights in Turkey.

Given broad relations between Turkey and Germany, we may expect these relations to continue more or less at the same level while Turkey’s EU accession process cannot be expected to be revitalized any time soon in the post-Merkel era.

By:  Yasar Yakis –  a former foreign minister of Turkey and founding member of the ruling AK Party.

Previous Article
Turkey’s expulsion of Western ambassadors cements authoritarian shift
Next Article
Turkey is the worst of the worst when it comes to transnational repression: Dr. Edward Lemon

Turkey is the worst of the worst when it comes to transnational repression: Dr. Edward Lemon
NAT 25th October 2021
Submit an Op-Ed
Tweets by NewsAboutTurke1