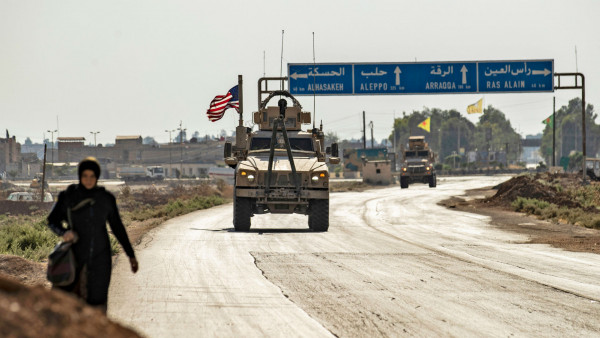 A touted gas deal involving Lebanon, Jordan, and the Syrian regime is not a sign that the Biden administration is rushing toward normalisation, analysts say.

In July, King Abdullah of Jordan made a visit to Washington to present a plan on Syria to President Joe Biden, marking a major shift in Amman’s official decade-long boycott of the Assad regime.

The king had already communicated with Bashar Al-Assad via intermediaries about a plan that would see Egypt supply gas to energy-depleted Lebanon via Jordan and Syria, with World Bank funding.

Assad, unsurprisingly, agreed to the proposal, keen to bring in much-needed commissions for his cash-starved regime and warm ties with Syria’s neighbours.

The problem for the king was the US’ Caesar Law, which has largely penalised any economic activity with Syria, and he would need Biden to order the Treasury to any freeze possible sanctions on Jordan if the deal was to go ahead.

“Biden didn’t say yes and didn’t say no but sent him Russia to discuss the plan with Vladimir Putin,” Ayman Abdel Nour, director of the All4Syria media network, told The New Arab.

“President Biden is waiting for his legal counsel to approve the deal and issue a statement in order [for] the Treasury not to sanction Jordan or Lebanon and write to the World Bank which will finance the deal. Until now the legal counsel did not write the memo.”

There are reports in Lebanese media this week that the Biden administration had issued a letter assuring that the parties involved in this would not be sanctioned by the US.

Yet there still remains strong opposition to this deal in the US houses, led by Republican Senator Jim Risch and Representative Michael McCaul.

A phone call between Assad and King Abdullah – the first one in a decade – followed, which was pounced on by pro-regime media implying this was another step towards Syria’s return to the Arab fold and that US normalisation with Damascus was imminent.

The Lebanon gas deal would undoubtedly be a major coup for the regime, giving it much-needed hard cash and prise a diplomatic opening in the region.

Yet the much-touted re-opening of the Jordan-Syria border – which was used as an example of this – was an act of smoke and mirrors, with Syrian nationals unable to enter the kingdom and around 80 percent of Syrian products barred from the Jordanian market, Abdel Nour said. The embargo on the Syrian regime remains very much in place.

There are also innumerable obstacles to prevent US normalisation with the Syrian regime, which is responsible for disappearing as many as 120,000 Syrians and has been consistently averse to making any concessions to the opposition.

The Caesar Law – named after a Syrian defector who smuggled proof of the regime’s programme of the mass slaughter of detainees – has made it effectively illegal for the US government to deal with the Syrian regime.

The Syrian American community have said they will lobby the government against any relaxing of the sanctions regime and oppose any attempt by Congress to overturn the Caesar Law.

“We might sue them if it progresses unless the government can find a loophole in the Caesar Law around this,” said Abdel Nour.

But Biden faces pressure from elements of the “Progressive” wing of the Democratic Party to end the US role as a global policeman and cease sanctions on regimes such as Syria, he added.

Jomana Qaddour, a Senior Fellow at the Atlantic Council, said that the US’ current Syria policy remains opposed to normalisation with the Syrian regime and that no reconstruction aid will be possible unless a political solution based on UNSC Resolution 2254 is implemented.

“The current administration has basically said that if anyone in the region thinks they can move things forward in Syria, using their own means and connections, then by all means let them,” Qaddour said.

“At the same time, US officials have said that for all this talk of reconstruction and wanting to engage with the Assad regime we haven’t seen one invest a penny in Syria yet. Although there is a lot of public noise about re-engaging with the regime and propping up Assad financially to save him, we haven’t seen the [kind of] robust assistance that Iran and Russia are keen on.”

There has been strong support among some Arab governments for re-engaging with the Assad regime. Iraq has been pressing Jordan to use its relationship with the US to work toward normalisation, while Egypt and the UAE have spearheaded recent efforts to have Syria re-join the Arab League. Abdul Nour said that Qatar and Saudi Arabia will likely veto such a proposal.

Qaddour believes that Gulf states will be mindful of the futility of investing in post-war regional countries where Iran has a stake. Saudi financial backing of the Saad Hariri government proved to be in vain when Iran turned on the money taps for its proxies in Lebanon.

The country is now bankrupt and the Saudi-sponsored Sunni bloc in Lebanon largely ineffective, with Hezbollah remaining the real power broker in the country.

Gulf efforts to bribe the Syrian regime out of the Iranian axis would likely end in a similar way, Qaddour said.

“As much as the Gulf would love to invest in the regime, I think it would be very difficult to match what the Iranians have given to Assad. I’m not sure Iran would ever allow Assad to make that trade-off with the Gulf,” Qaddour said.

“Although there is a lot of public noise about re-engaging with the regime and propping up Assad financially to save him, we haven’t seen the [kind of] robust assistance that Iran and Russia are keen on”

The Kurdish-dominated Syrian Democratic Forces (SDF) were said to be alarmed by Joe Biden’s rushed withdrawal of American troops from Afghanistan, fearing a similar scenario might develop in Syria and leave them at the mercy of IS, the Syrian regime, or Turkey.

In a bid to lull these fears, Biden dispatched the head of US Central Command, General Franz McKenzie, to eastern Syria to meet the head of the SDF, Mazloum Abdi, and assured him that the US would not depart, just yet.

Qaddour said that while the US will remain in Syria for now, the Biden administration does not plan on staying in Syria indefinitely and this will likely factor into US thinking.

“I do think there are other factors which could impact on our ability to stay in Syria. The Syrian regime has said it would push the US to leave Syria even by force,” Qaddour said.

“I don’t necessarily think that would be done via the Syrian regime forces but the allies – such as the Iranians – are keen to see their withdrawal from Syria’s most resource-rich region.”

Dareen Khalifa, a Senior Syria analyst at the International Crisis Group (ICG), said a priority for Biden, for now, will be on American troops working with Arab-Kurdish partners on countering IS.

This will de facto mean maintaining a residual US force in the country and continuing to deprive Assad of control over key resources in northeast Syria, such as oil and wheat, she said.

“Those major pillars of US engagement have not and probably will not change under this administration,” Khalifa told The New Arab.

There is an increasing potency to the IS insurgency in eastern Syria, which is likely to keep US forces occupied in the northeast for the coming years.

IS operatives move freely on both sides of the Euphrates River, launching attacks on Kurdish-led and regime forces while extorting and intimidating the local population, Khalifa said.

Analysis: In the space of just a few short years, Tehran has supplied its proxies with an unprecedented number of armed unmanned aerial vehicles – @pauliddon deep dives https://t.co/eIUJjMR0MM

The militants still control a small pocket of territory in central Syria, which had been a focus of regime offensives earlier this year, after a series of devastating attacks on the regime’s economic and military interests.

“Many of the [IS] attacks have been against SAA positions and patrols, while some have also targeted oil fields south of Tabqa,” Khalifa said.

“The proximity of these areas to northern Homs and Hama, where IS had grown in strength and expanded its geographic reach and effectiveness, has made the area more vulnerable to insurgent attacks.”

The SDF has also faced a testy relationship with the local Arab population in eastern Syria, as well as having to deal with a Covid-19 outbreak, drought, and an economic crisis.

Several Arabs have been killed by SDF forces during protests over the economic situation and the US has been unwilling to intervene.

“The Americans have always stayed out of day-to-day local governance and have attempted to do everything through the SDF, SDC (Syrian Democratic Council), and affiliated institutions,” Khalifa said.

These elements will add to US concerns about remaining in Syria, but the numerous pressures on the Biden administration, both local and regional, on accommodating Assad could prevent any march toward normalisation soon.

Wednesday’s attack on American troops at Al-Tanf base also highlights the vulnerable nature of the US presence in Syria and the temptations of the Biden administration to make a rapid pull-out.

By: Paul McLoughlin – a senior news editor at The New Arab.