The pull of conspiracy theories in Turkish political discourse

The pull of conspiracy theories in Turkish political discourse 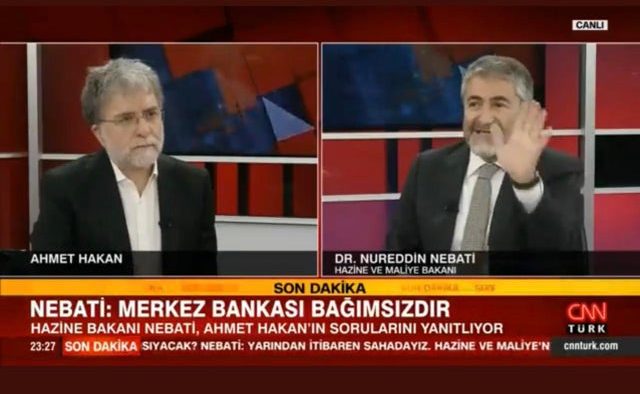 During a recent live interview with CNN Turk, Turkish Finance Minister Nureddin Nebati used a conspiracy theory to explain the country’s economic woes. The lira had lost nearly 40% of its value against the US dollar, Nebati said, because “the Fed was not an independent institution” and was instead “run by five big families.”

Despite their absurdity, conspiracy theories like the Fed-cabal claim are gaining favor among Turkish leaders. Deploying disinformation about others – from Germany to the CIA to the Fethullah Gulen Organization – has become a primary political defense, with good reason: Turks are a receptive audience.

Back in April 2018, when the Turkish currency hit a record low of 4.5 liras to the dollar, the Ankara-based Metropoll polling company found that 42% of Turks believed that “the decline in the lira was a plot of foreign powers.” Seven months later, polling company KONDA reported that 48% of Turks believed “the world is run by five big families,” whereas only 23% considered this statement to be false.

As these trends have continued, it’s no wonder that today’s leaders continue to keep up the charade.

It doesn’t help that President Recep Tayyip Erdogan is himself indulgent in post-truth oratory. For instance, Erdogan’s go-to culprit for domestic troubles is “the interest-rate lobby,” which he says has been actively (and singlehandedly) plotting Turkey’s economic demise, an idea first popularized during the Gezi Park protests of 2013.

Then there is ust akıl (mastermind), a term leaders use to refer to an omnipresent group opposed to what they claim is Turkey’s inevitable rise. The pro-government television network A Haber even produced a documentary called Mastermind in 2015. The two-hour-long investigation “exposed” ust akıl as consisting almost entirely of Jews and bending the world toward its will in the search for a 3,500-year-old “Ark of the Covenant.”

Again, crazy talk. But although pro-government media outlets like A Haber and state network TRT score miserably on international rankings for objectivity, they remain some of the only news channels watched by supporters of the Justice and Development Party (AKP), which makes up Erdogan’s base.

Given the environment, it’s not surprising that distrust in the media is at an all-time high. In 2018, the Reuters Digital News Report found that 40% of Turks distrusted the news, whereas only 38% believed what journalists reported. Moreover, 66% of participants said they relied on social media for their news.

These trends have continued. Turkey now ranks 31st out of 35 in the Open Society Foundation’s Media Literacy Index, owing to its “low potential to deal with effects of fake news and misinformation mainly due to underperformance in media freedom and education.”

“Post-truth” ideas were spreading freely in Turkey long before the term was crowned “word of the year” by Oxford Dictionaries in 2016. Political scientist and sociologist Şerif Mardin famously noted that “conspiracy theories are the historical philosophy of Turks,” while the concept of a “deep state” – anti-democratic forces within the political establishment – has captivated Turks for decades.

In other words, it is nothing new that Turkish politicians bend their words and make promises they cannot keep.

However, the high volume of state-backed disinformation coupled with the AKP’s strong hold on the media has pushed conspiracies to the fore. Erdogan’s mastery of blurring the lines between political aspirations and disinformation has spawned a type of politics devoid of truth and geared only to promote his agenda.

For instance, AKP supporters frequently reference the 2023 “expiry” of the 1923 Treaty of Lausanne as when the “golden age” of Turkey will begin, a fallacy that Erdoğan has promoted.

“We are determined to enter 2023 … as a stronger, more independent, and more prosperous country economically, militarily, politically, and diplomatically,” Erdogan said last July. “We continue to thwart the treacherous ambitions against our country’s unity and integrity, and the peace, and well-being of our nation.”

And yet there is no expiry date for the treaty, no hidden clauses to be unveiled next July, as any people with an Internet connection can see for themselves.

Not all conspiracy theories are as innocent as the Lausanne Peace Treaty. Some have real consequences.

Take, for instance, Erdogan’s obsession with vilifying George Soros, the Open Society Foundations’ founder, as “that Jew funding the Gezi Park protests.” This invective led to the closing of OSF’s Turkish offices in 2018, but not before OSF Turkey chairman Hakan Altınay and 13 of his colleagues were detained and indicted for trying to overthrow the government.

Philanthropist Osman Kavala, whom Erdogan dubbed the “remnant of Soros,” has also been jailed for more than four years.

Blatantly using conspiracy theories as a defense for their own failings has been the bread and butter of Turkish politicians for far too long. But in the absence of reliable sources and open access to information, there’s no stopping the rise of conspiracy theories among Turkey’s political elite.

As journalist Mustafa Akyol warns, “conspiratorial thinking has become a national problem,” with the educated and well-read powerless to change the narrative. In contemporary Turkey, where facts are politicized, a meaningful exchange of views is all but impossible.

By: Alexandra de Cramer – a journalist based in Istanbul. She reported on the Arab Spring from Beirut as a Middle East correspondent for Milliyet newspaper. Her work ranges from current affairs to culture, and has been featured in Monocle, Courier Magazine, Maison Francaise and Istanbul Art News.

Previous Article
How NATO’s most troublesome member became frenemies with Russia, and why it might not last
Next Article
Are Erdogan’s efforts to fix the economy working?