Why Russia and Ukraine are fighting over Snake Island

Why Russia and Ukraine are fighting over Snake Island

Snake Island leapt to international attention early in Russia’s war against Ukraine when its tiny garrison was told to surrender or face naval bombardment and certain death. “Russian warship, go fuck yourself,” came the now celebrated response from one of its guardsmen, Roman Hrybov.

Three months on, the 0.2 square kilometre island — barely more than an outcrop of rock — remains at the centre of a bitter fight as Ukraine and Russia vie for control of the Black Sea and the conflict’s broader propaganda battle.

Moscow has been unable to reinforce its position there to secure control against Ukrainian drone and air strikes. But nor can Ukraine, which has limited naval capacity, muster sufficient power to regain and hold the island.

The to-ing and fro-ing over the island is in many ways a microcosm of the war itself. Snake Island has strategic significance, as a military base there could dominate an area spanning hundreds of miles. But the fight has also taken on a totemic significance, spun by both sides to bolster morale.

Despite Hrybov’s valiant refusal to surrender, Snake Island’s garrison did lay down their arms and were later released by the Russians in a prisoner swap.

Snake Island “is strategically useful”, said a western official. “But it also has a symbolism that is possibly even more important.”

According to Greek mythology, Poseidon created Snake Island as a haven for Achilles and Helen. Today, with no trees or fresh water but boasting a helipad and two deepwater piers, the X-shaped rocky protrusion lies in the middle of Ukraine’s crucial shipping lanes. It is also just 35km from the coast of Nato member Romania. (Bucharest’s own claims to the island were dismissed by the International Court of Justice in 2009).

For Ukraine, preventing Moscow from using the island as a missile and naval base would help break Russia’s Black Sea economic blockade of maritime exports, including grain, of which Ukraine is a top global supplier.

Russia could also use the island as a base to attack Odesa and expand the conflict into Moldova and its Moscow-allied breakaway state of Transnistria. It could even potentially hinder the deployment of Nato weapons and troops from Romania.

“The one who controls the island can at any time block the movement of commercial vessels in all directions to the south of Ukraine,” Kyrylo Budanov, chief of Ukraine’s military intelligence, said on Friday.

So far, Ukraine has frustrated Russian attempts to turn Snake Island into a secure base, hitting Russian air defence systems and resupply vessels with air strikes and the Turkish Bayraktar drones that have led to some of Ukraine’s most spectacular military successes.

A video of aerial footage posted by Ukraine’s armed services on May 8 claims to show a drone strike taking down a Russian helicopter hovering over the island. Two days earlier, another video boasted that drone strikes had sunk a Russian patrol boat and destroyed a short-range missile system.

“This is what happens when you weren’t invited to Snake Island,” the post reads as techno music plays.

Moscow has its own version of events. During the attack, according to the Ministry of Defence, Russia shot down four Ukrainian aircraft, almost 30 unmanned aerial vehicles and at least three helicopters. Two dozen Ukrainian “saboteurs” were also purportedly killed, as was the deputy commander of Ukraine’s navy, Colonel Ihor Bedzai. Ukraine has confirmed Bedzai’s death but not the battle in which he died.

Michael Kofman, director of Russia studies at the CNA military think-tank, is less convinced, however. 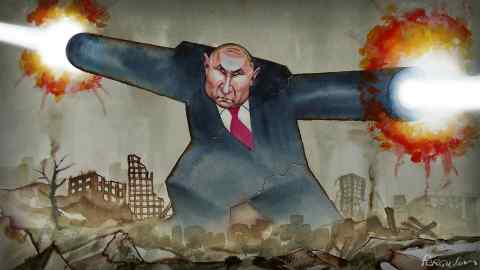 “You can tell from the Russian operation, it’s still unclear what they’re trying to do there,” he told a War on the Rocks podcast. “The Russian military has been the king of not well-co-ordinated efforts . . . sending in units without air support, then getting those lost and sending units to recover them . . . then sending a special forces unit with a helicopter and getting that killed by” Turkish drones.

The Russian army has similarly struggled to mount co-ordinated military operations in the battle for the Donbas, where the bulk of the fighting is now concentrated.

Militarily, analysts say Snake Island’s size and lack of cover make it all but indefensible. Unless Moscow manages to install air defence systems, or place a battleship with similar systems nearby, “Russian positions on the island are unsustainable”, Rochan Consulting, a military analysis group, wrote in a May 15 briefing. “Neither option looks currently viable.”

Ukraine’s immediate aim is not to physically control Snake Island, as its own troops would be as vulnerable as those of Russia. Rather, it wants to stop Moscow from fortifying its position and installing long-range air defence systems that could protect the area and allow for naval operations.

Andriy Zagorodnyuk, a former Ukrainian defence minister who advises the government on security, said Russia’s de facto control of Snake Island “becomes less critical if we destroy everything that arrives”.

Zagorodnyuk said two nearby oil rigs — now under Russian control — are also being used by Russia as military platforms to control and blockade maritime shipping.

“We need to deny their access to our territorial waters,” said Zagorodnyuk. “It’s very much pressing from an economic survival perspective should the war drag on.”