Turkey’s Growing Military Presence in the Kurdish Region of Iraq

Turkey’s Growing Military Presence in the Kurdish Region of Iraq 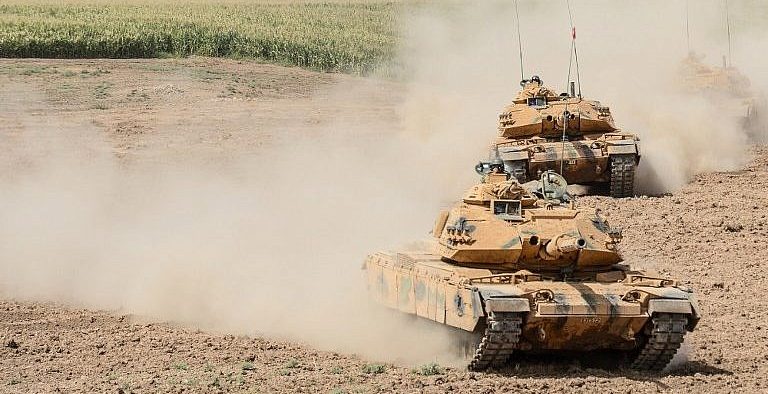 Turkey’s continued invasions in the KRI are part of Turkey’s broader regional strategy and expansion.

On Monday, April 18, the Turkish military launched a new invasion into the Kurdistan Region of Iraq (KRI), deploying ground and air forces into the mountains. As with previous incursions, Turkey used the pretext of fighting the Kurdistan Workers’ Party (PKK) to explain its entry into Kurdish territory. However, Turkey has established permanent military bases and posts after each military campaign since 2018. These bases are catalogued in a 2020 map released by the Turkish presidency, pinpointing forty military bases inside the KRI. Though the post was deleted soon after posting, the map remains on the internet.

Turkey frequently launches new operations within the KRI during the spring, translating into increasing land grabs in the KRI since 2018. Ankara’s pretext for these operations has some justification; the PKK presence in the KRI has been real since the 1980s. But for Turkey, the invasion of KRI has had far more significant outcomes than limiting the operations of the PKK. For example, the PKK has not lost its ability to launch attacks inside Turkey, but it has limited its activities to self-defense. Instead, Turkish occupation of areas inside the KRI will allow it to target the Kurdistan Regional Government (KRG) entity and its aspiration of independence or even the thought of repeating an independence referendum-like event.

The expansion policy in Iraq is part of Turkey’s regional aims that have been taking shape since 2018. Turkey continues to directly meddle in the affairs of Syria and Libya, and continues to balance its relations with the Muslim Brotherhood and Hamas while attempting to mend ties with Egypt and the Gulf states. Turkey also sided directly with Azerbaijan when it launched a war on Armenia in Nagorno-Karabakh, and is seeding its influence in Africa. Turkey has been playing a double game in the Russian invasion, but the international community is turning a blind eye as long as Turkish drones are sold to Ukraine.

Furthermore, Turkish interests in the region also extend to its ability to secure the current oil pipeline from Kirkuk to its Cihan port and perhaps a future gas pipeline like the KRG is in progress to establish with the help of Turkey. KRI’s natural gas is appealing for Turkey to control its security, especially as Turkey’s President Recep Tayyip Erdogan recently pledged to bolster Turkey’s access to natural gas through a deal with Iraq.

Though it might not be an easy ride for Turkey to take the Kurdish natural gas—given the disputes among Kurds themselves and with Baghdad—Turkey is still the sole place to make the case for any party to export the natural gas. The gas deal is essential for Turkey, and it enjoys international backing. As Europe struggles to find alternative suppliers in the wake of Russia’s invasion of Ukraine, this pipeline could replace a reasonable amount of the Russian natural gas being supplied to Europe, especially as expectations regarding increased production from Algeria and Libya have fallen by the wayside. Geopolitically, Iran is against such a deal with Turkey, but its own limitations as an importer—due to U.S. imposed sanctions—make it an unrealistic alternative.

As part of Turkey’s expansion policy, Iraq has been a significant target, including an attempt by Turkey to control a considerable number of Iraqi political entities. For example, Turkey has exploited the lack of Sunni leadership in Iraq since 2003, and after nearly two decades, Erdogan was able to recently unite the Sunnis under his banner. Indeed, Turkey’s attempts started from Nineveh after 2003 but expanded to include Sunnis in the west of Iraq. Today, the semi-unified Sunni bloc in the Iraqi parliament is directly influenced by Turkey. Likewise, Turkey used the Turkmen minority in Kirkuk and Nineveh for its political advantage. For example, the Turkmen Front party was established by Turkey in Erbil in 1995. Since then, the Turkmen Front has been supported by Turkey and is used for various agendas, including targeting the Kurds and their political parties in the disputed territory. Turkey went even further byestablishing militias for both Sunnis and the Turkmen Front. In 2015, without any agreements with Baghdad or the U.S.-led global coalition fighting ISIS, Turkey formed a Sunni force after establishing a military base in Nineveh’sBashiqa district. In Kirkuk, Turkey trained hundreds of fighters of the Turkmen and armed them as a pressure campaign against the Kurds under the pretext of fighting ISIS.

Turkey has also benefited from the intra-Kurdish division in the KRI, namely between the Kurdistan Democratic Party (KDP) and the Patriotic Union of Kurdistan (PUK), as well as divisions between the KDP and their fellow Kurds from Syria and Turkey. However, the geography, historical regional competition between Iran and Turkey, and the reality on the ground have made the KDP naturally attracted to Turkey and the PUK to Iran. Today, Turkey is a major supporter of the KDP to a point, as it takes advantage of billions of dollars of energy and trade exchanges with the KRG.

In Baghdad, Turkey has established a new level of relations with Iraq via the current cabinet headed by Mustafa al-Kadhimi. Baghdad in turn supports the constant Turkish bombardment of the Yazidi areas, targeting local forces loyal to the PKK. Moreover, in January 2021, Turkey officially deployed troops to Baghdad using its NATO membership status, gaining further influence in the country. Despite Baghdad’s occasional statements criticizing Turkish actions inside its borders, the current government agrees with Turkey’s overall approach when it comes to its “fight” against the PKK. For Baghdad, this is a “win-win” situation—Turkish leverage over the Kurds.

For example, Baghdad’s policies have always been to undermine the KRG’s entity—even more so after the Kurdish independence referendum. Turkey’s control over KRI territory has not moved Baghdad to take any action but condemnation. Despite the historical animosity between Ankara and Tehran, the two powers always agreed with Baghdadon crushing Kurdish aspirations. Moreover, a weak KRI translates to a stronger Baghdad, resulting in more Kurdish dependence on the central government. At the same time, it will make Baghdad the sole side dealing with Ankara, unlike the current arrangement where Turkey deals with the KRG, mainly with KDP directly.

Realistically, Baghdad is also constrained by Turkey’s water leverage on the country as its upstream neighbor, due in large part to successive Iraqi governments’ lack of water planning since 2003. For example, Turkey temporarily cut off of waters from the Tigris and Euphrates in a move that immediately impacted the country and became a political issueas farmers across Iraq struggled with droughts.

The negative Iranian influence in Iraq and its supporting of militias have also made Turkey a much more appealing alternative to Kadhimi’s government. Turkey is also much closer to the international community than Iran is, and can offer the most of any regional power. Turkey is already providing Iraq with drones, and Baghdad has dropped the Russian contract for MiG-29s in exchange for a deal for Turkish drones, with blessings from the United States. Additionally, Iraq is also a primary market for Turkish goods, as Turkish brands make up about 90% of those in Iraqi shopping malls.

These factors all suggest that Turkish influence and involvement inside Iraq will only continue to grow. Turkey suffers many domestic, economic and political issues resulting from Erdogan’s authoritarianism. Yet Turkish regional expansion is likely unstoppable, especially due to the lack of unity in the Arab world. Like other regional powers, Turkey is clearly interested in presenting itself as a leader of the Islamic world. Moreover, its geographic importance and military development in recent years make its importance in the region hard to deny. Even as Turkey faces elections in the upcoming year, its regional expansion policies will likely continue beyond an Erdogan presidency, were he not to be re-elected. With the Turkish opposition clearly aligned with Erdogan on a majority of his regional interventions—especially when it comes to the Kurds—this is a policy the KRI will have to grapple with long term.