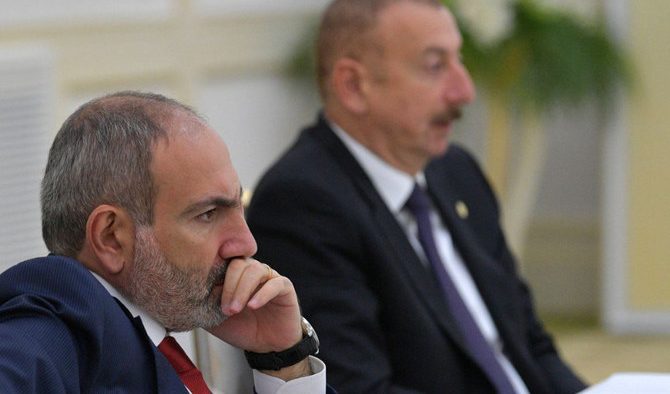 Several important developments have taken place recently in Azerbaijan-Armenia relations.
The first was a meeting on Dec. 14 of last year between President Ilham Aliyev of Azerbaijan and Prime Minister Nikol Pashinyan of Armenia, facilitated by European Council President Charles Michel. This was the very first meeting in three decades between Azerbaijani and Armenian leaders without Russia’s presence.
The second was a meeting on April 6 in Brussels, again facilitated by Charles Michel, who characterized the encounter as the true beginning of the “negotiations process” between the two countries.
The third was a landmark speech that Pashinyan delivered on April 13 in the Armenian parliament, in which he said: “Today, the international community clearly tells us that to be the only country in the world that on a bilateral level does not recognize the territorial integrity of an ally of Turkey, Azerbaijan, is a great danger not only for Artsakh (the name Armenians use for Karabakh) but also for Armenia. Today, the international community again tells us to lower the bar a bit regarding the question of the status of Artsakh and you will ensure a great international consolidation around Armenia and Artsakh. Otherwise, the international community says, do not rely on us, not because we do not want to help you, but because we cannot help you.”
He also pointed out that the Karabakh question was not, in his opinion, a territorial one but rather one that concerned the rights and freedoms of Armenians living there.
For decades, Armenia has considered this issue as a question of territory. Pashinyan became the first Armenian political leader to make this distinction. In fact, as the Soviet Union dissolved, Armenia committed itself to the preservation of Azerbaijan’s territorial integrity and the Soviet-era borders. The question of territory had thus already been solved in 1991.
Only a political leader who won a strong electoral mandate could take such a bold step. As expected, Pashinyan’s statement caused a storm both in parliament and on the streets. The opposition faction in parliament boycotted the parliamentary sittings for one week. These are understandable reactions in a highly politicized atmosphere. The boycott will have a limited effect on the unfolding of events because the international agreements are on Azerbaijan’s side.
A threshold has now been crossed with Pashinyan’s parliamentary address. More reactions may be expected, but everything is unfolding as it would in a pluralistic society.

A bumpy road lies ahead for both countries. Because of deep-rooted mutual negative perceptions, fanatics in both countries will raise objections to the process.

One of the merits of Pashinyan’s approach is that it made him the first political leader to address the heart of the Karabakh problem. No other leader so far had been able to make a distinction between the rights and freedoms of Karabakh Armenians and the international obligations that Armenia had assumed in becoming an independent country.
Russia’s temporary absence in the bilateral Azerbaijan-Armenia meeting does not of course mean that it will be sidelined indefinitely. After the ceasefire of the Second Karabakh War, Moscow monopolized the Minsk Process by practically excluding the two other co-chairs, the US and France. As Russia is now almost at war with NATO in Ukraine, the Minsk Process co-chairs may not be able to convene a meeting, but Russia may still stick to the process for the sake of remaining in command.
After the Second Karabakh War, a broad agreement was reached to set up a Joint Border Commission whose tasks would be twofold. One is the process of defining the borders of villages inhabited by Azerbaijanis or Armenians. In the almost seven decades of the Soviet era, it did not matter much whether a particular village was inhabited by Azerbaijanis or Armenians because they both were Soviet citizens. Neither did the borders of the village matter, whereas borders may now become a crucial issue. Russian archives will now become important because original borders were delineated by Josef Stalin in 1921. Russia will probably use this leverage to counterbalance EU-mediated negotiations.
The second task is demarcation, the process of physically marking the border by erecting poles.
Azerbaijan will not oppose committing itself to preserving the rights and freedoms of its citizens of Armenian origin. Apparently, it was able to persuade the EU Council president that these international commitments must be observed, mutatis mutandis, by both sides.
A bumpy road lies ahead for both countries. Because of deep-rooted mutual negative perceptions, fanatics in both countries will raise objections to the process and attempt to interrupt it, but if wisdom prevails, such obstacles could be overcome by moderate and realistic leaders.

By: Yasar Yakis – a former foreign minister of Turkey and founding member of the ruling AK Party.
Twitter: @yakis_yasar

KRI: Five killed in air strike near town east of Kirkuk
NAT 23rd May 2022
Submit an Op-Ed
Tweets by NewsAboutTurke1