‘Whataboutism,’ Is There Such a Thing? – by Nick Kossovan

‘Whataboutism,’ Is There Such a Thing? – by Nick Kossovan 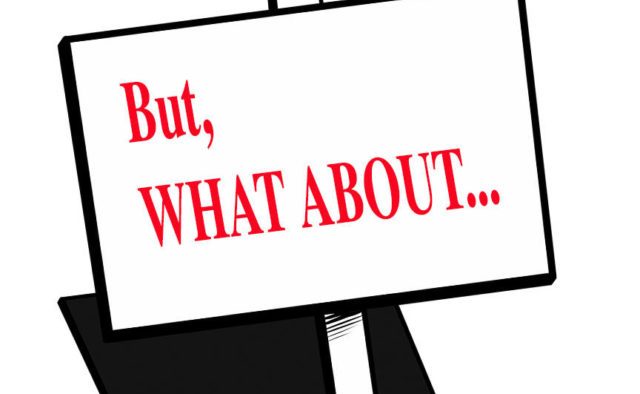 If everyone is guilty of something, is no one guilty of anything?

Morality doesn’t pick sides. It doesn’t care about borders, political ideologies, socio-economic status, religions, genders, race, ethnicity, sexual orientation or whether you like pineapple on your pizza. (Have I covered everything we use to divide ourselves?).

You’ll be having a conversation. Perhaps over coffee, a few drinks, or a meal. Inevitably Russia will come up, or Trudeau, or Biden. Your conversation partner bought into the social pressure that they’re a Russian sympathizer if they don’t stand by Ukraine as we’re being told to do. Finally, you give in to your animal instinct and ask the “elephant in the room” questions. “Obama launched airstrikes in Afghanistan, Iraq, Syria, Libya, Yemen, Somalia and Pakistan. Where was the outrage then?” or “Canada sanctions Russia for invading Ukraine. Why did Canada not sanction the U.S. when it invaded Iraq, Afghanistan, Syria, Libya, etc.?”

Have the nerve to mention the “mistakes,” made by our side, and the blended word whataboutism will be used against you. (Fun fact, “whataboutism” was added to the dictionary in October 2021.)

In philosophy, whataboutism is known as “tu quoque,” pointing out hypocrisy. I’ve yet to meet a person who doesn’t become defensive when their hypocrisy, or their side’s hypocrisy, is pointed out.

As to why Canada didn’t sanction the U.S. when it invaded Iraq, Afghanistan, Syria, Libya et al.; it’s in Canada’s best interest to take a hypocritical stance of not showing disapproval of its southern neighbour’s wrongdoings and sometimes going as far as supporting the U.S.’s wrongdoings.

Whataboutism was coined during the postwar years when American-Russian relations were rather tense, and the following back-and-forth occurred:

The Soviet Union would commit a crime, according to the West. Washington would call them on it. The Kremlin would then point out that the U.S. was also committing heinous acts. These accusations would contain the phrase “What about …” and point out America’s Jim Crow laws, which until the Civil Rights Act of 1964 weren’t entirely extinct, the U.S.’s bombing sprees, or any other embarrassing facts about the West. The U.S., and its western allies, began responding to the Russian critique by labelling it “Whataboutism.” American intellectuals would later use the term “moral equivalence.”

Whataboutism in action a few years back: Obama laments about Putin’s 2014 invasion and seizure of Crimea. In response, Putin mentions Kosovo and the Scottish Independence Referendum.

Western countries sell themselves as “developed” and “democratic.” They’re quick to criticize countries they dislike. The world cheered when Ukrainians stocked up Molotov cocktails and took up arms against the Russians. However, when Palestinians and Iraqis do the same thing, they’re labelled “terrorists.”

Whatever you call it: whataboutism, moral equivalence, two wrongs, double standards, it boils down to this: My side isn’t subject to the same moral rules as the other side. My side has excusing factors for what it did. (or is doing)

People who have the courage to be a libertarian thinker understand this: If it’s wrong when Stephen Harper did it, it’s wrong when Justin Trudeau does it.If Trump’s sexual predations were wrong, so were Bill Clinton’s predations. If Russia launching missiles at Ukrainians is wrong, then Turkey’s aerial bombing of Kurdish civilians is also wrong.

Western media tries to explain why our wrongs are less bad, less evil, and excusable, than the wrongs of “the other side.” Wrong is wrong regardless of who does it.

Trudeau letting in an unlimited number of Ukrainian refugees begs the “what about” question, why isn’t he doing the same for Afghans, Syrians, etc., refugees? You can draw your own conclusions as to the reasons why.

A question such as this comes across as being centrist. Actually, “what about” questions are far from ambivalent. Moral clarity requires disruptive conversations—uncomfortable conversations. Moral clarity condemns self-interest and the even worse self-serving consensus talk for the high-grade cowardly drivel it is.

Here’s an example. If there’s one thing both sides of Washington’s political divide agree on, and Canadians look at enviously, that is the virtue and beauty of U.S. force projection. Based on their actions Democrat and Republican presidents as far back as Harry S. Truman, seem to have a fondest for bombing poor people in distant lands. Pundits love it. Western foreign policy establishments love it. Western mainstream media love it.

But this is utter insanity. If bombing Americans is wrong, then bombing the people of Yemen is wrong. No one—not even those who speculate on the geopolitical reasons for Russia going into Ukraine—disagrees with condemning the Russian invasion of Ukraine. However, ignoring that the U.S. has been violating other nations’ sovereignty—Chile, Guatemala, Nicaragua, Argentina, Iraq, Iran, Brazil, Angola, Zaire, Cuba, Libya, Afghanistan, China to name a few—for years is hypocritical.

It doesn’t matter what gets hashed out in bipartisan meetings; ethical standards are universal. The Ukrainian resistance and the civilian victims of Russia’s invasion are given sympathetic coverage by Western media. This raises the “what about” question of why there hasn’t been a comparable response when the victims aren’t white, Christian Europeans or when the aggressor is the U.S. or a U.S. ally? The double standards and resulting hypocrisy coming out of Washington, and the West, is obvious.

A recent example: President Joe Biden asserted that “nations have a right to sovereignty and territorial integrity.” He is 100% on point! However, the U.S. is the only government to formally recognize Israel’s illegal occupation of Syria’s Golan Heights and Morocco’s annexation of the entire nation of Western Sahara, both seized by force in defiance of the United Nations. See the hypocrisy?

Another recent example: Despite the decree issued by Joe Biden on October 7, 2021, Washington didn’t react to Turkey’s attacks targeting civilians in Rojava. Such blatant hypocrisy invites “what about” questions.

Two Nations Clinging Onto ‘What Once Was.’

Regardless of your political stripes, it’s easy to see two declining superpowers—a corrupt and morally bankrupt America and the crumbling oligarchy of Putin’s Russia—trying to hang onto what once was. Today the U. S. is an imploding republic whose global influence is dwindling, while Russia is a rusted-out autocracy that can barely project strength outside of its neighbourhood.

These different “Rome is burning” scenarios don’t give Washington the right to one set of moral laws and Moscow to another set. The moral arc of the universe doesn’t bend that way. When Washington accuses Russia of hacking America’s elections, then moral seriousness demands it addresses U.S. interference in past Russian elections. If it’s wrong for Iran to oppress women, then it’s wrong for Saudi Arabia to oppress women. If China is barbaric for using capital punishment, so is the U.S. If the U.S. recognizes the Republic of Kosovo, it should recognize Kurdish self-determination in Kurdistan and Rojava as well.

Isn’t all oppression of women wrong? Isn’t all capital punishment barbaric? Shouldn’t the desire for self-determination be listened to empathically and at the very least applauded?

Only when self-interest is removed from the equation will the answer be a universal “Yes!”

Those who use the term whataboutism do so to deflect the hypocrisy being pointed out, especially if it’s hypocrisy the West benefits from. As long as there are double standards that serve our interests, there’ll always be those who’ll say, when asked a “what about” question, “That’s whataboutism!”—what can you do?

Written exclusively for NAT by Nick Kossovan, a self-described connoisseur of human psychology, writes about what’s on his mind from Toronto. You can follow Nick on Twitter and Instagram @NKossovan

Previous Article
Finishing the Job: Turkey Preparing For Military Operation in Syria
Next Article
The Rojava Revolution Has Lessons for Western Feminism