Electioneering in Turkey: Turkish right-wing populists on the rise

Electioneering in Turkey: Turkish right-wing populists on the rise

19 May is a bank holiday in Turkey. It is a day rich in symbolism, dedicated to Turkish youth by the country’s founder Mustafa Kemal Ataturk. On 19 May 1919, the father of the country launched the war of liberation against Western powers, which lasted until the founding of the Republic in 1923 – or so it says in Turkish history books.

For Umit Ozdag, leader of the new Victory Party, 19 May provided the perfect opportunity to bang the nationalist drum. The 61-year-old visited the mausoleum of Ataturk in the Turkish capital Ankara with a group of supporters and posed with passers-by in front of the large monument. People who recognised him were keen to catch a selfie. A man walking past called out to him, “My teacher, it’s good you exist.” One woman even kissed Ozdag on the forehead.

Umit Ozdag is the shooting star of recent weeks. Wherever he appears, a crowd quickly forms. Everyone wants to see him, many want to express their support. Because Umit Ozdag deliberately addresses the issues that are worrying many Turks: galloping inflation, dwindling purchasing power, existential fears and alleged “alienation” in their own country due to refugees.

According to official figures, there are currently 3.8 million Syrian refugees registered in Turkey. How high the actual number is remains uncertain. In addition, there are refugees from Afghanistan, Iraq, Pakistan and other countries, whose number according to the UNHCR is said to be around 320,000. The number of unreported cases is suspected to be much higher.

“We don’t want our people to struggle with hunger and poverty while our taxes are spent on Syrians, Afghans and Pakistanis,” Umit Ozdag has been heard to rail at numerous events in recent weeks. Refugee bashing goes down well with many Turks. Because people are afraid. Inflation recently reached around 70 percent. The population is suffering under the enormous increase in prices. And there is no end in sight. 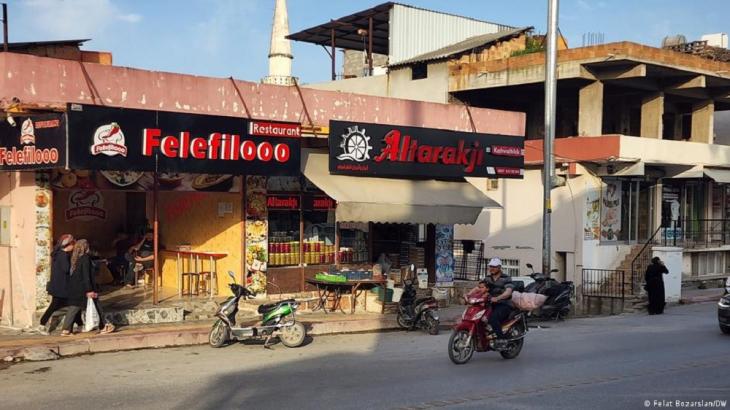 End of the welcome culture: Turkey, with its population of almost 85 million, currently hosts around five million refugees. More than 3.6 million of them are Syrians. They fled to their southern neighbour following the outbreak of civil war in 2011. In the wake of the severe monetary and economic crisis in Turkey, sentiment toward Syrian refugees in particular is intensifying. Last year saw violent attacks on Syrians, their homes and their businesses in the capital Ankara

Ideological proximity to the “Grey Wolves”

Actually, Umit Ozdag is no new ” saviour” either, he has been part of the political establishment too long for that. But the tone he strikes is a new one.

Umit Ozdag comes from a politically active family. His father was a close confidant of Alparslan Turkes, founder of the Nationalist Movement Party (MHP). Better known in Germany for its “Grey Wolves” organisation, which also has boasts networks in Germany and is under surveillance by the German Office for the Protection of the Constitution. Ozdag’s mother was also active in the MHP. She was the very first chairperson of the party’s women’s branch.

Ozdag was born in Japan, where his father worked in the diplomatic service in the early 1960s. Ozdag studied political science, philosophy and economics at the Ludwig Maximilian University in Munich.

Ozdag was also a member of the MHP. First in the youth organisation, then in the executive committee. Until he was expelled from the party in 2016 after openly criticising its leadership. A year earlier, the MHP had entered into an alliance with Erdogan, enabling the AKP to gain a majority upon re-election. To Ozdag, the idea of propping up Erdogan’s government was a source of serious displeasure.

He and a handful of other MHP dissidents subsequently founded the conservative-nationalist Iyi Parti, in English “the Good Party”. Having fallen out with the leadership, he resigned in 2021 and ultimately founded his own party: the “Victory Party”.

His new party only really took off a few months ago, however, after he started issuing right-wing extremist, racist and anti-refugee statements. Since then, his approval ratings have improved dramatically. In the latest polls at the beginning of May, support for the party even exceeded the two-percent mark, which by Turkish standards is already quite high 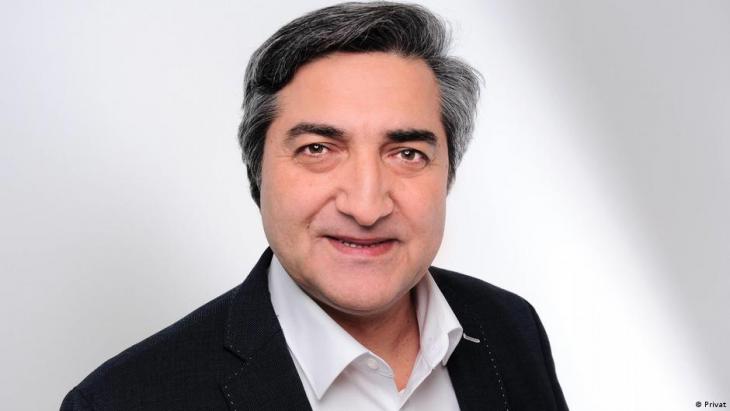 Zafer Partisi – ” Victory Party “: Turkey’s new nationalist party borrows from the legacy and ideology of the Pan-Turkish-Turanian movement, which in the 1930s and 40s was still closely linked to the official national ideology of Kemalism in the youthful republic. The party’s founder, Umit Ozdag, draws on these nationalist elements. Panturkism, and/or Panturanism play an important role in Ozdag’s ideology, confirms Turkey expert Kemal Bozay from the International University of Duesseldorf and Cologne

For Professor Kemal Bozay of the International University of Applied Sciences in Dusseldorf and Cologne, who has been observing the Turkish ultranationalists for years, the ideological colour of the Victory Party is clear: “Its party agenda is ultranationalist; its rhetoric and forms of presentation extremely right-wing populist,” says Bozay in interview. Ozdag draws on certain folk-nationalist elements. Panturkism, or Panturanism, plays an important role for him, Bozay adds. For Turkish ultra-nationalists, Turan is the ideal of an ethnically homogeneous state of all Turkic peoples from the Balkans to Western China, to be established under the leadership of Turks.

According to expert Bozay, Ozdag also presents these historical folk-nationalist elements in his party manifesto. It is worth noting that, having founded his party, Ozdag immediately visited the grave of Alparslan Turkes, the former leader of the Grey Wolves, linking his party directly to the legacy of the latter.

Ozdag – scathingly critical of the AKP

Umit Ozdag pulls no punches when it comes to the ruling party, either. Most recently, he clashed with Turkish Interior Minister Suleyman Soylu. Soylu had strongly criticised Ozdag for his party’s financing of an anti-refugee film called “Silent Conquest”. The situation between the two men came to such a head that Ozdag, to the amazement of the Turkish public, practically challenged the interior minister to a duel: were the interior minister man enough, he would come out, Ozdag threatened.

Thanks to such statements, Ozdag suddenly began to score points with many government critics, even those calling themselves social democrats. A heated debate broke out on social media. Ozdag was not racist at all, many said. He was defending the values of a healthy Turkish patriotism. As a result, Ozdag also received support from the largest opposition party, the Republican People’s Party (CHP). 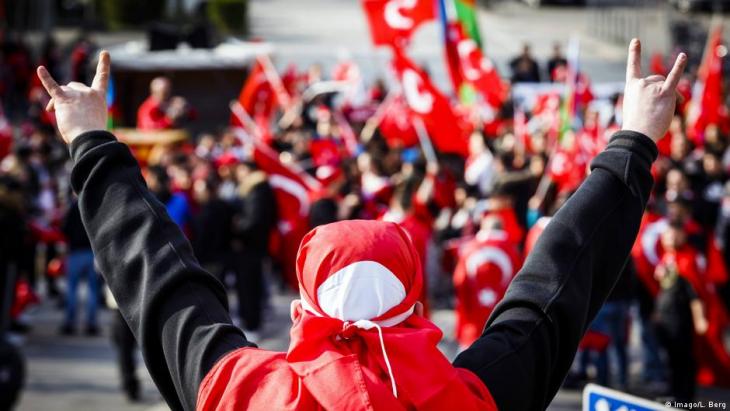 Difference to the MHP or BBP

Can Ozdag’s Victory Party establish itself? For political scientist Berk Esen of Sabanci University, it is still too early to say. It will take a few years to assess the party’s potential, once it has adopted policies in other areas.

Historically, the Turkish ultra-nationalists have split once before. Their right-wing Islamist wing broke away in 1993 to found the “Great Unity Party” (BBP). To them, Islam is an essential part of Turkish identity.

For Umit Ozdag and his party, this does not play a major role, says Kemal Bozay. Another difference to the ultra-nationalists is the Victory Party’s anti-government stance. While the MHP and BBP support Erdogan and the AKP government, Ozdag opposes the government, Bozay reminds us.

Moreover, these old ultra-nationalists, the MHP and BBP, have always maintained close ties to the so-called deep state, Turkey’s “state within a state” and its paramilitary underground structures. Umit Ozdag, on the other hand, has clearly distanced himself from them, Bozay notes.

For political scientist Berk Esen, the Victory Party displays similarities with European populists. Not only because of the anti-refugee theses, he says, and goes on to explain: for Ozdag, Turkey consists of two camps; on the one side are the government and the opposition as the political elite, who tacitly accept Turkey being overrun by refugees. The rest are the people, whom Ozdag wants to save with his Victory Party. Indeed, it is surprising such a populist party took so long to emerge.

Here, Esen is referring to the alliance between the ruling AKP and the ultra-nationalist MHP and BBP. Both have supported Erdogan since 2018 and go along with his refugee policy, despite the rumblings of dissent among their supporters. Whether they can continue to keep the party faithful in line or stand to lose them to the Victory Party is currently hard to tell. One thing however is certain: the issue of refugees will continue to preoccupy Turkish society.

Previous Article
Kurdish-Led Forces Cannot Count On Syrian Air Defenses To Protect Them Against The Turkish Air Force
Next Article
Protest in front of ECtHR to draw attention to rights violations in Turkey, court’s inaction