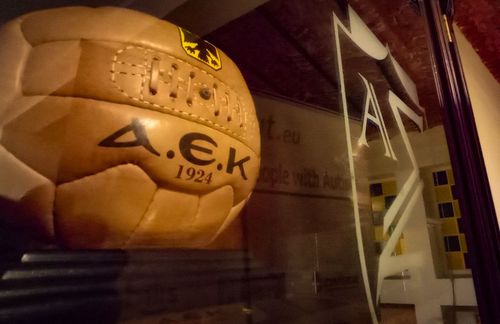 An AEK ball on display at the Beyoğlusport Museum. (Photos: Wouter Massink)

Nowadays, one might easily walk past Beyoğluspor, hidden between student bars, hotels, and a hairdresser in the bustling Taksim area. However, behind its gate lies the oldest still existing sports club in Türkiye and the birthplace of two of Greece’s biggest football clubs.

Founded in 1877, Club Hermes by three local Greek intellectuals to “intellectually develop the inhabitants of the East.” The club had its best years under the name “Pera Club”, named after Istanbul’s historic Pera district. Alongside the 1896-established Tatavla Club, now Kurtuluş S.K, they were once the country’s most distinguished sports clubs and carriers of Greek nationalism within the Ottoman Empire.

Towards the end of the 19th century, Constantinople, the Ottoman capital, called Istanbul after 1923, counted more than 300.000 Greeks, nearly 35% of the population. Actively involved in the intellectual and cultural life of the city, they founded many cultural societies, fraternities, and sports clubs in the twilight years of the Empire.

Primarily serving nationalist purposes, these clubs were highly influenced by the nationalist irredentist Venizelist movement, named after the popular Greek Statesman at the time. The doctrine’s goal was to unify the different culturally and linguistically Greek communities into a common Hellenic national identity. Greek sports clubs, such as Pera Club and Tatavla Club, were ideals carriers of this ideology as they were ‘culturally connected’ to ‘ancient Greek civilization’ and the legacy of the Olympic games, reintroduced in 1896 in Athens.

Together with the mushrooming of sports clubs in the Empire, football was brought in by the British in 1890, making its debut in Smyrna, nowadays Izmir. Whereas the game is extremely popular in current Türkiye, it initially took a while to get accepted by the local Muslim Population, gaining first popularity among the urban non-Muslim communities.

The new sport was rejected on religious and cultural pretexts and regarded as a symbol of invasive Western culture. Conservative Ottomans deemed the wearing of shorts by football players as a violation of Islamic dress codes and rules. Additionally, the game symbolically resembled the Karbala incident. In 680, Hossein, the grandson of Prophet Mohammed, was allegedly decapitated, and his head was kicked around by his executioners.

It was only after the reign of Sultan Abdulhamid’s ended in 1908 that the Muslim and Turkish elite started to be interested in the game. As modernists tried to purge the Empire of its ‘backwardness’, they believed that football could be used to stimulate Turkish nationalism and be beneficial to the ‘nation’.

“Domination of our ancient race”

By this time, Greek sports clubs dominated football. Pera Club controlled the scene between 1918-1922, winning the championship in 1922. Along with the rise of sports clubs, international games and competitions come to life, whereby nations could show their ‘physical superiority over other ethnicities.’ These sporting events became a sort of extension of social reality, driven by the newly emerging social and national identities emerging in the Empire.

Illustrative were the 3rd Pan-Constantinopolitan Games, organized in 1920 by several Greek Sports clubs in Arnavutköy, in order “for the demonstration of Greek Sports, as for the moral exaltation and domination of our ancient race against the foreign people who live in our city”, and the 1st International Athletic Games of Constantinople held at the legendary Taksim stadium, in May 1922.

One of its star players at the time and later founded of AEK Athens, Konstantinos Negrepontis, stated in an interview in 1930: “… You should know that then, we were not only fighting for the colors of our team but also for the prestige of our nation, our tribe. … The idea that we represent our motherland made us invincible. I confess that Pera Clubs owes so much of its success to its training and discipline of its members but also mainly to the idea of the prestige of our race. We thought very well that if the team won, the defeat would reflect on all expatriates of the city, on all Greeks.”

Nevertheless, the success of the Greek clubs in Constantinople would only be short-lived and Venizelist ambitions eroded. The Asia Minor catastrophe in 1922 was a harsh blow to Hellenism, and in 1923, the Treaty of Lausanne established Modern Türkiye, initiating the final countdown of the Greek presence in Constantinople, with the 1923 Greek-Turkish population exchange, leading to the compulsorily relocation of one and a half million people, and a large outflux of Greek athletes.

In modern Türkiye, measures were rolled out restricting and eliminating the community’s rights. For example, law 2525, introduced in 1934, obliged Greeks to change their names to Turkish ones. Athletes and sports clubs that used their Greek names were forbidden to participate, resulting in Tatavla Club adjusting its name to Kurtuluş S.K. and Pera Club becoming Beyoğluspor. In addition, top players of Greek descent began to prefer other teams. Players like Karakasis, after changing his name to Karakas, transferred from Pera Club to Galatasaray. Lefter Küçükandonyadis, one of the best players in Türkiye in the 1950s and 1960s, opted for Fenerbahçe, although his brother played for Pera Club. Even though the two clubs of Greek origin continued their sports activities, their dominance slowly vanished. Beyoğluspor managed to reach the 5th in 1945 in the first football division, staying in the highest division up to 1962. The club remained highly successful in other sports, such as volleyball, where it is still the only team ever to win the championship in Türkiye for five consecutive seasons between 1949-1953, and its table tennis team is still a Süper Lig competitor. Kurtuluş S.K., similarly, after having relatively successful years in the 1930s and 1940s, saw a rapid decline in its sports achievements. The club currently stays afloat on voluntary contributions.

However, while most Greek teams in Türkiye faded, their newly established equivalents in Modern Greece prospered. The expellees from Constantinople settled in the two main Greek cities, Thessaloniki and Athens. They opened new sports clubs, the most successful ones being PAOK Saloniki standing for Pan-Thessaloniki Athletic Club of Constantinopolitans, and AEK Athens, meaning Athletic Union of Constantinople.

The Greek Super League giants’ heritage remains embedded in their acronyms and emblems, and whenever they have to play in Istanbul, they still come to visit their respective clubs of origin, Kurtuluş S.K. and Beyoğluspor. (WM/VK)