Saudi Arabia to continue support to “vulnerable countries” like Turkey

Saudi Arabia to continue support to “vulnerable countries” like Turkey 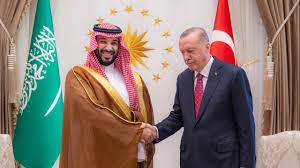 Saudi Arabia has been working with multilateral institutions to provide support to Turkey, Pakistan and Egypt as part of the kingdom’s largesse to nations it deems “vulnerable,” Saudi Arabia’s Finance Minister Mohammed Al-Jadaan said on Wednesday on the sidelines of World Economic Forum in Davos.

“We are investing heavily in these countries and will continue to look for opportunities to invest,” Al Jadaan said in an interview with Bloomberg TV, adding that “It’s very important to bring stability.”

Earlier in panel discussion, Jaadan said the kingdom was changing the way it provides assistance to allies, shifting from previously giving direct grants and deposits unconditionally.

“We used to give direct grants and deposits without strings attached and we are changing that,” he said, adding Saudi Arabia was encouraging countries in the region to make reforms.

“We need to see reforms. We are taxing our people, we are expecting also others to do the same, to do their efforts. We want to help but we want you also to do your part.”

“It will happen soon. The decision was taken between us and Turkey,” he told reporters, saying discussions were on remaining details.

“There is great improvement in our relationship with Turkey and we aspire for investment opportunities in Turkey and other countries,” he said.

The momentum of talks between the countries came after Ankara and Riyadh’s joint effort to mend ties that were ruptured after the murder of Saudi journalist Jamal Khashoggi in 2018 at the kingdom’s Istanbul consulate.