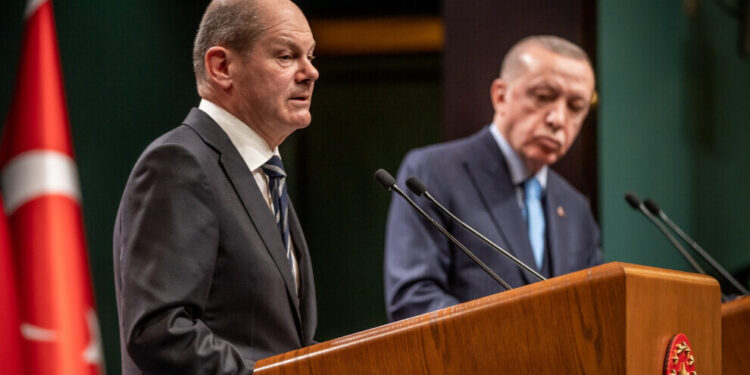 Turkish president Recep Tayyip Erdoğan’s visit to Germany’s Chancellor Olaf Scholz in Berlin, which was planned for Friday, has been cancelled, according to Hanover-based editorial network RedaktionsNetzwerk Deutschland (RND).

The Chancellor’s foreign policy adviser, Jens Plötner, and Erdoğan’s special adviser İbrahim Kalın could not have agreed on the content and the time of the meeting, RND reported on Tuesday citing sources close to Turkey’s ruling Justice and Development Party (AKP).

One of the issues that the two advisers could not reach an agreement on was Scholz’s intention to publicly criticise an AKP MP’s recent election campaign appearance in Germany’s Neuss during the meeting.

On 13 January, Mustafa Açıkgöz, an MP from AKP, called on for the annihilation of all those opposing Erdoğan in Germany, during a speech at a mosque in Neuss. The German Foreign Ministry summoned the Turkish embassy, defining Açıkgöz’s speech in Neuss as “hate speech”.

There were also speculations arising out of AKP’s plans to bring forward Turkey’s upcoming elections, which are scheduled for June, to 14 May that the Turkish president would use his Berlin visit as an election campaign.

Steffen Hebestreit, the spokesman for Germany’s federal government, said on Monday that he has no information on the matter, “but there were rumours in this direction.”

A protest by the “Erdoğan Not Welcome” initiative was also scheduled outside Chancellor Scholz’s office in Berlin on 27 January.