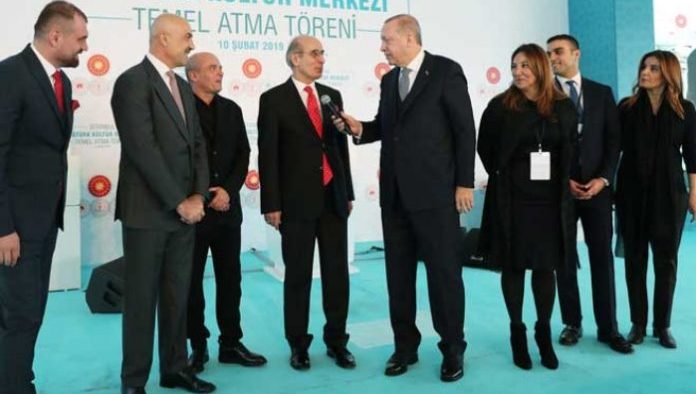 The head of Turkey’s state-run housing authority, TOKİ, inadvertently revealed serious financial problems regarding a headline Istanbul construction project during what was supposed to be a private chat with President Recep Tayyip Erdoğan, the Ahval news website reported on Wednesday.

Ömer Bulut was heard over an open microphone complaining about apparent money issues as he stood on a stage next to Erdoğan and building contractors in İstanbul to mark the start of the reconstruction of the Ataturk Cultural Center (AKM) in Taksim Square.

“Mr. President, we have serious problems regarding the money,” Bulut said in videos of the conversation posted on social media and YouTube. “Maybe we can discuss that some time.”

Erdoğan says “Go on, go on,” to which Bulut responds: “We were seriously affected. TOKİ ruined us,” he said, in apparent reference to the cost of the institution’s nation-wide construction projects.

Erdoğan then tapped the microphone to see if it was broadcasting.

Bulut became the head of TOKİ in December.

The rebuilding of the center, an İstanbul icon derelict for more than a decade, is slated to cost TL 860 million ($152 million), according to local media.

Many Turkish firms are experiencing financial problems after a currency crisis last year devastated the economy, which contracted by 1.1 percent in the quarter ending in September.

Banks have raised interest rates and made less money available to businesses and consumers as bad loans have increased.