Turkey’s strategy: Down the rabbit hole

Turkey’s strategy: Down the rabbit hole 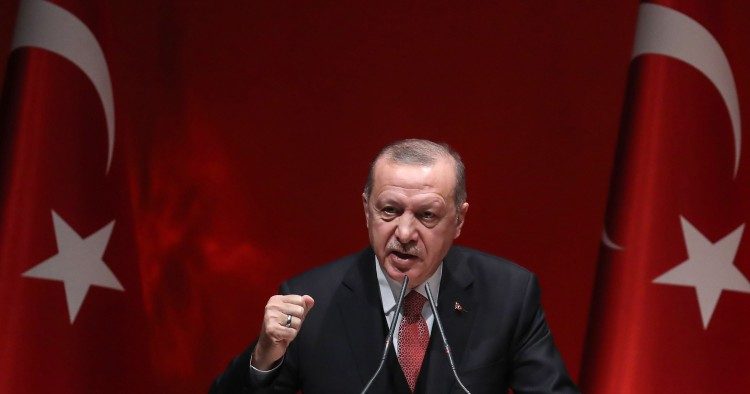 On March 7 President Recep Tayyip Erdogan declared that Turkey’s decision to buy the Russian S-400 missile defense system is irrevocable. He went further, hinting that the country might buy the S-500 next-generation system as well. His remarks underlined Turkey’s strategic decision to turn away from NATO as a genuine partnership. A number of consequences will follow. The Turkish decision came the same week that Russia was deploying another regiment of S-400s in Kaliningrad, directly aimed at Estonia, Latvia, Lithuania, and Poland, perhaps even Germany and Norway, all NATO allies of the U.S. — and of Turkey. Under NATO’s famous Article 5 provision on collective defense, which commits members to consider an attack on one as an attack on all, Ankara will find itself discussing within NATO meetings how to combat the Kaliningrad S-400 threat to NATO’s northern flank while simultaneously explaining why the S-400 system in Turkey poses no threat to the Alliance. Across a broad spectrum of bipartisan congressional and American military leaders, opposition is solidifying against delivery of the F-35 multirole fighter to Turkey in light of its S-400 decision.

Every new weapons system Turkey acquires from Russia will make it more dependent on Russia and make it that much harder to decline Russian offers in the future. Russia will control the extent of technology transfer, and it has already deployed the S-400 system in Syria. Does Turkey really believe Russia will allow it to shoot down Syrian aircraft or transfer technology that will enable Turkey to develop its own missile defense system against Syria? Contradictions abound.

Other NATO allies and friendly countries deploy the U.S. Patriot missile defense system. The Netherlands, Germany, Japan, Israel, Saudi Arabia, Kuwait, Taiwan, Greece, Spain, South Korea, the United Arab Emirates, and Qatar have purchased the system. According to reports, Romania, Poland, and Sweden also plan to acquire Patriot missile defense systems. Why then is it worth so much to Turkey to reject a Patriot deal in order to purchase a system specifically designed for use against NATO?

Turkey says it is because the U.S. will not transfer the technology it wants in the deal. If this were true, then it would be a point for further negotiation, not rejection. Turkey flies F-16s and Boeing AWACS with upgraded technology after purchase. Acquisition of these aircraft has substantially benefited Turkey and provided its armed forces with invaluable experience. Turkey points to the acquisition of an S-300 system by Greece years ago, but that system was never deployed — an option Turkey has never offered. Ankara’s response to Washington’s offer belies any thought that the Turkish government had a genuine interest in the Patriot system.

Turkey’s embrace of Moscow is highly unlikely to bring it greater security or major diplomatic gains in Syria. Ankara is the junior partner in the Astana peace process. Russia says Turkey must negotiate with Syria over any safe zone on Turkey’s border, and Syria says only Syrian troops can occupy Syrian territory. Moscow has made clear that its troops — not Turkey’s — will replace Americans withdrawn from Manbij. Turkey wants the Kurds largely excluded from the peace process, but they are talking with the Syrians and the Russians in separate channels. In Idlib Province, new joint Russian-Turkish patrols show that Russia intends to supplant the Turkish presence in due course. A much-advertised Turkish-Russian joint strategic planning group meeting has been postponed twice this month. Eight years into the Syrian war, Turkey is no closer to achieving its objectives.

In an attempt to enhance its influence in international affairs, Turkey often tries to shape outcomes by announcing them before the fact. Most recently, on March 18, Ankara announced a joint Turkish-Iranian campaign against the PKK, only to have Iran immediately deny that its forces were engaged. Such maneuvers, intended for Turkish public consumption, all too often end up revealing the weakness of Turkey’s position.

From the moment of President Erdogan’s apology in July 2016 to Russia for Turkey’s shooting down a Russian fighter eight months earlier, Turkey has slowly but steadily acceded to Russian overtures. Ankara’s purpose seems to be to placate Moscow sufficiently to gain Russia’s support for Turkey’s own priorities. At present, however, it is difficult to see how Ankara will accomplish any of its major aims in Syria: long-term occupation of Syrian territory bordering Turkey, the military defeat of the Syrian Kurds, the permanent return of refugees, and a large financial share in Syria’s reconstruction. All these hopes face formidable challenges and depend in the end on the sufferance of Moscow and Damascus.

Why has Turkey never turned to the Americans to offset the Moscow-Tehran-Damascus troika? There are four reasons. First, Mr. Erdogan never fully trusted the U.S. again following its failure to use military force after the chemical weapons attack by Damascus in Ghouta in 2013. Second, Ankara was never willing to seek a middle ground with Washington over the Syrian Kurds and ISIS, giving up strategic interests for tactical and domestic political ends. Third, weakening domestic support for the Justice and Development Party (AKP) government has pushed the party to rely on and fan nationalistic fervor at home by treating the U.S. as an unfriendly power. Finally, Mr. Erdogan feels he has been rejected by Western powers and has instead opted for a “Muslim Way” democracy resting solely on his personal charisma. As a result, Ankara now is in a position that makes it impossible to collaborate effectively with the one country which — at least in theory — is still willing to help Turkey protect its long-term interests.

In Syria, it is true that the U.S. never had a strategy for winning. Failure to honor the famous redline on chemical weapons in 2013 encouraged further violence and slaughter. Now, as U.S. influence in Syria seems to be slowly draining away, why would European allies see any long-term gain in joining a U.S. team? At this point, the Americans no longer have the means to play a major hand in framing Syria’s future. Washington has offered no broader rationale for its continued presence beyond the goals of frustrating Iran and pre-empting an ISIS resurgence. For the first goal, the U.S. presence is too small, and American troops may become more of a target than a platform for operations. For the second, ISIS is already showing up in other countries and no longer needs to be in Syria to continue its terrorist campaign. Moreover, it might be that the small U.S. force in southern Syria is aimed more at preserving influence in Iraq than in making a genuine difference in Syria. A hard-eyed look at what the Americans can do at this point might convince Ankara in any case that the U.S. is not offering anything that could turn things strategically in Turkey’s favor against Russia, Iran, and Syria. In short, however well-intentioned the last-minute U.S. efforts, America cannot achieve any strategic goals with the resources it now will be deploying.

No one in Europe or America thinks that Turkey is going to change course in its foreign policy for the foreseeable future. Flexibility on the missile defense systems and on northeast Syria would have kept that possibility open, even if only barely. As Ankara blames its S-400 decision on U.S. intransigence, few Americans will agree. Turkey’s diplomatic effort to portray itself as a victim, however, will provide Russia with new opportunities to play on Turkish sentiments to achieve a major Russian interest: a weakened and divided Transatlantic Alliance. Dependent on a minority nationalist party to win in the municipal elections on March 31, the AKP government will ramp up its anti-American rhetoric. Even so, the U.S. will not push Turkey to leave the NATO Alliance, and the Alliance Treaty contains no expulsion clause. Turkey’s estrangement from the West is moving the country further and further into uncharted territory without any of the traditional expert Turkish regards for careful and effective diplomacy.
Ambassador (ret.) W. Robert Pearson is a non-resident scholar at MEI and a former U.S. ambassador to Turkey. The views expressed in this article are his own.

Tags:
Previous Article
Put-Downs Abound, but Turkey and the EU Can’t Quit Each Other
Next Article
Unrest in Turkey and Erodgan’s Future

“There is a lack of democratic culture in Turkey”