In Turkey, Imamoglu is a victim. Here’s why he doesn’t talk about it.

In Turkey, Imamoglu is a victim. Here’s why he doesn’t talk about it.

On May 6, Turkish opposition figure Ekrem Imamoglu became the latest politician to fall victim to President Recep Tayyip Erdogan’s authoritarian ambitions. In a move that has been widely characterized as a power grab by Erdogan, Turkey’s Supreme Election Council (YSK) stripped Imamoglu of his newly elected post as mayor of Istanbul after just 17 days in office. The decision came after Erdogan’s Justice and Development Party (AKP) brought forth claims of electoral irregularities in the appointment of polling station officials. Although the polling workers Erdogan was referring to also oversaw races for district administrators, mayors and municipal councils — races that the AKP and its coalition partners won — the YSK canceled only the vote for the Istanbul mayorship and called for a rerun on June 23.

In the wake of the annulment of the election, Imamoglu has received worldwide recognition for his positive outlook and mild-mannered approach. He has unified voters, many of whom see him as a powerful symbol of the repressed opposition, representing the opposition National Alliance of the secular-Kemalist Republican People’s Party (CHP) and the nationalist conservative Iyi (“Good”) Party. Recent research in political science suggests that Imamoglu may benefit from the widespread perception that he has suffered at the hands of Erdogan. Imamoglu himself has launched a campaign focused on positivity and optimism.

The legacy of political victimhood

In a survey experiment conducted before the June 2015 general elections, Guiler finds that voters in Turkey are more likely to feel positively toward candidates who cite experiences of political suffering in their biographies. Respondents who were told that a hypothetical candidate from the AKP had personally suffered because of his political beliefs were more likely to trust, feel close to, and consider voting for this candidate. This pattern held even when the sample was restricted to secular voters with low trust in the AKP prior to the experiment.

The benefit of political victimhood is not lost on Imamoglu. In a recent interview with the New York Times, the politician insinuated that Erdogan’s time in prison in the late 1990s helped him amass power. Imamoglu also joked that were Erdogan to imprison him, he might benefit similarly.

Given prevailing wisdom and empirical evidence that political suffering influences public perception, one might expect Imamoglu to make his victimhood in the March mayoral election a central feature of his campaign.

Yet, while Imamoglu could rightfully highlight the fact that he was stripped of a position he lawfully won in an election with an already uneven playing field, he has eschewed politics of victimhood for a campaign rooted in the power of optimism. Why?

First, Imamoglu does not need to highlight his suffering because the nullification of the March results is already a central focus of the Turkish opposition. Pundits and Turkish citizens alike fear that this election reversal represents an end to Turkey’s democracy, and Imamoglu is the figure that stands in the way of consolidated authoritarianism. Turkey’s democracy can rebound if Imamoglu manages to win again, in the face of likely electoral fraud and a very uneven playing field with skewed access to resources, media and state institutions.

Second, while Imamoglu is a victim of undemocratic practices today, he is a candidate for the CHP — a party that historically has also perpetrated electoral injustices for its own benefit. The CHP today owns a history of party repression dating to the one-party period of Turkey’s founding.

To be sure, the CHP has shown signs of changing in recent years. In his forthcoming book, Draege shows how new internal elements in the CHP have challenged some of its Kemalist foundations. Following the Gezi protests in 2013 and a youth movement within the CHP calling for greater inclusion in 2014, a new wave of representatives was elected for the CHP in the 2015 elections. The most prominent representative of this shift is the new vice chairman and leader of economic affairs, Selin Sayek Boke. Along with the Istanbul chair of the CHP, Canan Kaftancioglu, and others, she started an internal movement to push the party away from its leader-oriented past and make it an ideologically wholehearted center-left party.

Yet a dominant core of the CHP leadership has insisted on Kemalist positions above all else. In the 2014 localand presidential elections, the CHP proposed joint candidates with the Nationalist Movement Party (MHP), a party that soon after would join the AKP government. In May 2016, the CHP leadership supported the government’s proposal of removing immunity from prosecution for members of parliament. This bill paved the way for large-scale imprisonment of leading opposition politicians, including presidential candidate Selahattin Demirtas. In short, the CHP may be a victim now, but it has not acted like a democratic opposition party for long enough to credibly appeal to victimhood.

Divisions among the opposition

A third reason Imamoglu may be hesitant to pursue a strategy of victimhood is that he is heading an opposition alliance that includes groups of historical enemies. His candidacy is backed by both the CHP and the Iyi Party, while the pro-Kurdish Peoples’ Democratic Party (HDP) refrained from proposing candidates to these elections in a tacit support of Imamoglu’s candidacy. But these parties come from contradictory ideological strands of Turkish politics. While the HDP comes from the pro-Kurdish tradition, the Iyi Party split from the nationalist MHP — a party affiliated with violence against Kurdish activists in the 1970s. Were Imamoglu to try to appeal broadly with victimhood narratives, he would risk pitting potential voters against one another. It was not long ago that Imamoglu’s supporters were victims of one another rather than the AKP.

The current political conflict in Turkey revolves around the AKP’s authoritarian government and its repression of the opposition. But the complex history of past repressions and the persistence of deep ideological conflict greatly delimits the tools available to the Turkish opposition today.

Kimberly Guiler is a research fellow at the Middle East Initiative at the Harvard Kennedy School of Government who is completing a dissertation on the politics of victimhood in Turkey at the University of Texas at Austin.

Jonas Bergan Draege is a postdoctoral fellow at the Middle East Initiative and Evidence for Policy Design (EPoD) at the Harvard Kennedy School of Government. He is currently completing a book on the opposition in Turkey under the AKP.———— 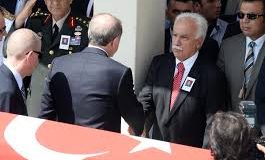