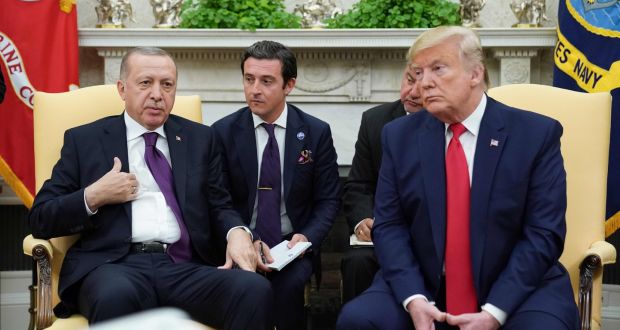 US president Donald Trump on Wednesday lauded his relationship with Turkish president Recep Tayyip Erdogan as the leaders met to overcome mounting differences between the two Nato allies ranging from policy on Syria to Turkey’s purchase of a Russian missile defence system.

Mr Trump’s warm welcome of the Turkish president came amid anger in the US Congress about Ankara’s offensive into Syria to drive out a Kurdish militia, Washington’s main partner in the fight against Islamic State.

“We’ve been friends for a long time, almost from day one,” said Mr Trump of Mr Erdogan as they sat next to each other in the Oval Office. “We understand each other’s country. We understand where we are coming from.

“They’re highly respected in their country and in the region,” Mr Trump added of Mr Erdogan and his wife, Emine.

In front of the White House, protesters denounced Mr Erdogan’s visit and urged Mr Trump to protect Kurds threatened by Turkey’s incursion into Syria. One sign read: “America Stand With Your Kurdish Allies.”

Despite his warm welcome, the two Nato allies have been at loggerheads for months now and their ties hit a new crisis point last month when Mr Erdogan began a cross-border incursion against the US’s Kurdish allies in Syria and upended the US presence there. The United States has also been livid over Turkey’s purchase of Russian missile defence systems.

Turkey shrugged off threats of US sanctions and began receiving its first S-400 deliveries in July. In response, Washington removed Turkey from the F-35 fighter jet programme, in which Ankara was a manufacturer and buyer. But so far, the United States has not imposed any sanctions.

Five Republican senators, including vocal critic of Turkey Lindsey Graham, came to the White House and spoke with Mr Erdogan and Mr Trump about the F-35 programme.

Turkey’s S-400 purchase infuriated the US Congress. The House of Representatives last month passed a sanctions package to punish Turkey over its Syria operation, which key members of the Senate, such as Mr Graham, have vowed to advance if Ankara endangers Kurds.

“The Kurds have risked a lot to stand with America and fight our shared enemy, and there is very real concern that we do not want to see Turkey engaged in offensive actions against the Kurds,” Mr Cruz said.

The House also voted last month in favour of a non-binding resolution recognising the killings of 1.5 million Armenians a century ago as a genocide, a symbolic but historic vote denounced by Turkey.

Could US force regime change in Turkey?
NAT 23rd November 2019

How an ultra-secularist gained clout in Turkey’s Islamist government

Could US force regime change in Turkey?