Both Republican and Democratic lawmakers were wary about Turkish President Recep Tayyip Erdoğan’s visit to the White House on Wednesday, calling the timing of the meeting, just one month after Ankara invaded northeastern Syria, “inappropriate.”

President Donald Trump probably should have taken their advice.

During a joint press conference Wednesday afternoon, Trump stood alongside Erdoğan — whom Trump said he’s a “big fan of” — and let the Turkish leader repeat his talking points, unchallenged. The US president proved himself to be woefully unprepared, or indifferent, to what’s actually going on in Turkey.

Two moments stood out, both of which came in the question-and-answer session. The first was when Trump encouraged Erdoğan to call on a Turkish journalist for a question. “Would you like to pick somebody?” Erdoğan responded in Turkish, and Trump continued: “A friendly person from Turkey, friendly. Only friendly reporters. We like to see, there aren’t too many of them around.”

But in Turkey pretty much the only reporters around are friendly to the president. Since the 2016 failed coup attempt, Turkey has jailed more journalists than any other country in the world for three years straight. According to the Committee to Protect Journalists, 68 journalists were jailed in Turkey last year alone. And that doesn’t include other dissidents or Erdoğan’s perceived political enemies who’ve been arrested in the thousands.

“Only friendly reporters, we like to see. There aren’t too many of them around.” https://abcn.ws/2K0BLjq 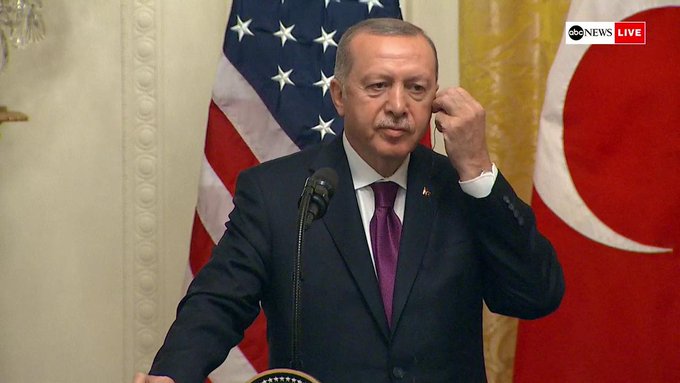 369 people are talking about this

Yes, Trump was kidding because he considers any critical media “fake news,” and he, too, only wants questions from sympathetic corners. (At the press conference he took a question from a reporter from conservative news site OANN and Fox News.) But cracking a joke about friendly reporters next to a leader who’s openly hostile to freedom of the press, and has so far acted without restraint to crackdown on dissent, is still a jarring scene for a US president.

Or as Lindsey Graham (R-SC) told ABC’s Jonathan Karl during the press conference, “There aren’t any others left.”

So the president made light of a legitimate human rights crisis — and somehow the press conference got even worse from there.

Toward the end of the press conference, Trump discussed the US’s relationship with the Kurds. In Syria, the US for years allied with Syrian Kurdish forces, who did most of the ground fighting against ISIS. But Trump’s decision to withdraw from northeastern Syria last month effectively abandoned the Kurds to Turkish forces and their proxies. Both Republican and Democratic lawmakers have condemned to Trump’s abandonment of the US’s Kurdish partners, and have tried to push legislation to punish Turkey.

But on Wednesday, Trump had a different, very wrong take. “We have a great relationship with the Kurds,” he began. “We’re with them now, we get along with them.” 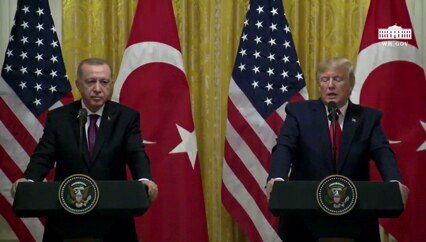 1,517 people are talking about this

This is an astounding claim: Erdoğan considered the Kurdish presence across the border as an existential threat, as he sees some of the Syrian Kurds as maintaining ties to the Kurdistan Workers’ Party (PKK), an insurgent group in Turkey that’s waged a decades-long war against the Turkish state.

But Erdoğan basically considers all Kurds in Syria terrorists; his invasion has created a humanitarian crisis as thousands of civilians fled the fighting. Kurds have also historically faced discrimination in Turkey, and Erdoğan is actively cracking down on Kurdish groups, alleging that catch-all “terrorist” link.

Trump has repeated Erdoğan’s talking points, calling Kurdish forces as “no angels” last month. But Trump’s claim that the Turkish president has a “great” relationship with the Kurds is both absurd and dangerous — and it gives Erdoğan cover to wage his campaign in northeastern Syria with impunity.

Trump sent a letter to Erdoğan on October 9 threatening him not to invade Syria, even though Trump was already pulling back US troops. “Don’t be a tough guy! Don’t be a fool!” Trump wrote in the bizarre note. Erdoğan told reporters Wednesday that he returned the letter to Trump during his visit (though previous reporting said he’d thrown it out). But either way, Erdoğan ignored Trump’s directive. And it makes sense why — the Turkish leader seems to have no problem getting exactly what he wants from President Trump.