Why Erdogan’s Belligerence Is Out Of Control – Analysis

Why Erdogan’s Belligerence Is Out Of Control – Analysis 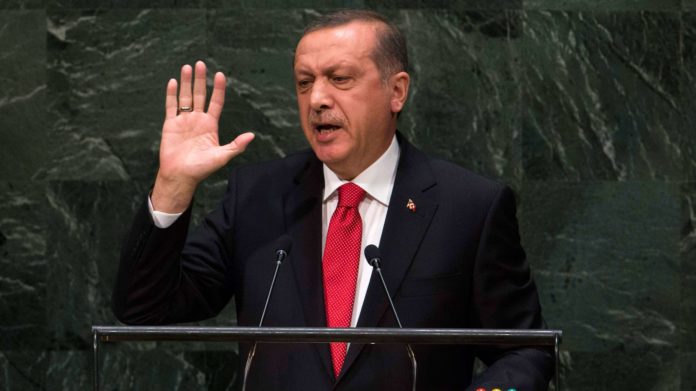 Turkish President Recep Tayyip Erdogan’s behavior is rapidly spinning out of control. His belligerence is creating waves in and around the Mediterranean, dividing Europe and America, and presenting challenges to the West over how to respond.

Emboldened by his military adventures in northern Syria and subservient to Russia’s will, Erdogan is creating heightened tensions at a time when, in French President Emmanuel Macron’s phrase, there are questions about who in NATO is “brain dead” and who is not.

France is looking at events in Syria, and indeed the whole region, from its own strategic viewpoint. Erdogan’s push in several directions is visually problematic, and is upsetting processes in the region to tone down tensions. Instead of being a willing and active participant and sticking to the script, if you will, Erdogan is reaching out in all directions, staking claims.

For the West, and the US in particular, the challenge that Erdogan now presents is not only about removing nuclear missiles from Turkey, but questioning the very purpose of Turkey’s NATO membership. This will not end well; Moscow knows that, and is biding its time.

“Brain-dead” NATO began in Ankara with Erdogan’s provocative test of the Russian-made S-400 missile defense system against US-made F-16 fighter jets, in defiance of US requests. A spokesman for Erdogan promised that Turkey would not integrate the S-400 missiles into the NATO security or air defense systems, and instead operate it as a stand-alone platform.  But Turkey has broken such promises before; it views the security relationship with the US as a transactional one. The back-and-forth over Ankara’s judicial actions in the US to extradite Gulenists, and now the F-35 program, exposes how such behavior is a key factor in Erdogan’s projection of Turkish power.

It seems a long time since US President Donald Trump described as “wonderful” his meeting with Erdogan in November at the White House; even longer since Trump threatened to destroy the Turkish economy and imposed sanctions on Ankara. Moscow was elated by the latter, because the more Trump turned against Ankara, the closer Erdogan shifted toward Russian President Vladimir Putin.

The US is also extremely tardy in triggering automatic sanctions, which again benefits Moscow because the lack of US resolve to act on a critical foreign policy security issue involving the sale of advanced Russian weaponry is viewed as weak, particularly with a selective CAATSA, the Countering America’s Adversaries Through Sanctions Act.  This policy gap, which Turkey and others are taking advantage of, needs to be sorted out immediately.

Further trauma to the region is caused by Erdogan’s sudden burst of activity to shore up some fronts while expanding in others, including  two new agreements with Tripoli on security and military cooperation, and marine jurisdictions. The latter agreement confirms that Turkey and Libya are now maritime neighbors. The delimitation starts from Turkey’s southwestern coast of Fethiye-Marmaris-Kaş and extends to the Derna-Tobruk-Bordia coastline of Libya. In addition, the maritime delimitation agreement also recognizes Turkey’s rights in its exclusive economic zone (EEZ) extending into the southeast of the island of Crete, thwarting any illegal attempts to confine the country’s EEZ in the Mediterranean into an area of 41,000 square meters.

This area, which had a potential to be a potential flash point, has just been doused in gas.  The agreement also pushes other regional states such as Israel, Egypt, the Greek Cypriot administration, Greece and the EU countries to negotiate with Turkey over any pipeline project to carry Eastern Mediterranean natural gas to European markets.

Ankara sees, for example, that when in March 2019, Israel, Greece and the Greek Cypriot government signed a deal in Tel Aviv on the proposed EastMed pipeline with the participation of US Secretary of State Mike Pompeo, that this project would be running through what are now considered Turkish waters. It is estimated that the $7 billion project will take several years to complete and deliver 10 billion cubic meters of gas per year, but Erdogan’s bold move challenges the Mediterranean littoral states as never before.

The question now is how the US will respond.  It seems inevitable that nuclear weapons will be next on the agenda.  At issue is the deployment of nuclear weapons throughout Europe, including Turkey. The 50 in Turkey may be out of date in terms of their positioning, with Turkey’s current direction highly disconcerting to European and Arab partners. Erdogan outplayed Trump on Syria, and is now discussing more arms purchases from Russia; clearly Ankara needs to think more clearly about its NATO membership, or it may be shown the door.

Dr. Theodore Karasik is a senior advisor to Gulf State Analytics and an Adjunct Senior Fellow at the Lexington Institute in Washington, D.C. He is a former Advisor and Director of Research for a number of UAE institutions. Dr. Karasik was a Lecturer at the Dubai School of Government, Middlesex University Dubai, and the University of Wollongong Dubai where he taught “Labor and Migration” and “Global Political Economy” at the graduate level. Dr. Karasik was a Senior Political Scientist in the International Policy and Security Group at RAND Corporation. From 2002-2003, he served as Director of Research for the RAND Center for Middle East Public Policy. Throughout Dr. Karasik’s career, he has worked for numerous U.S. agencies involved in researching and analyzing defense acquisition, the use of military power, and religio-political issues across the Middle East, North Africa, and Eurasia, including the evolution of violent extremism. Dr. Karasik lived in the UAE for 10 years and is currently based in Washington, D.C. Dr. Karasik received his PhD in History from the University of California, Los Angeles.

Hakan Sukur: How former Turkey star ended up in the US as a taxi driver
NAT 15th January 2020